They either want to vote for him or beat him up 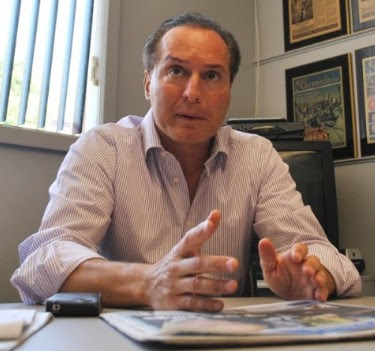 The Harley Davidson rider, guitar player, area school story-time reader and hard-on-crime Astoria councilman unapologetically spoke his mind about several issues concerning his district at the Queens Chronicle office on Friday. In fact, Councilman Peter Vallone Jr.’s no-filter approach, he said, has prompted him for about two years to not ride the trains — fearing physical confrontations with people opposing him, some of whom have assaulted him in the past. However, although some disagree, many back the councilman as shown by his 10 years in office and over $1 million raised for future campaigns.

So what’s next for this councilman with some controversial views?

“I would love to stay in the position I’m in, but I’m term-limited out and there’s only one spot available. I’m taking a serious look at it,” he said.

Helen Marshall’s Queens borough president position will be available in 2013.

Does anyone believe this guy ever rode the subway to begin with?
Posted by Queens Crapper at 12:44 AM

From another Crappy posting which explains why Vallone raised so much money:

If you could take money out of the political equation, you would have civil servants. There is so much that needs to be improved in this city. Good people could solve these problems if they really wanted to. However, nothing gets done unless money changes hands. Things have to get really bad for the tide to turn. Politics is truly a dirty business and you have to pay to play.

All politicians should be term limited. The President of the US is term limited -- everyone else shoud be -- especially Congress. Tell Vallone to stick a fork in himself - he's done. He should get a job in the private sector.

Yeah, but the Mayor of NYC is special. He thinks the law doesn't apply to him because he's rich.

the guy who wants to be DA is afraid of bullies on the train?

you can't make this stuff up

This fellow's image fades once you cross Grand Central - the southern part of his district is attached but is all but ignored.

Once you cross Northern, the indifferent scowls become outright hostility.

Daddy will get him a lobby job, then a judgeship. He will be the coda to the long ice-age imposed on Astoria by the familia.

The thaw once they are gone will be Springtime in Astoria: like the exit of Mubarak, there will be dancing in the streets.