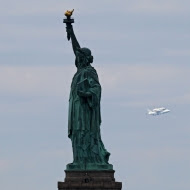 The big demographic discussion of the 2012 elections might be about how the parties can court America's growing Hispanic population, but in future presidential races, the conversation might center around the Asian vote. According to new research from the Pew Research Center, people from Asian countries now make up the largest group of immigrants to the Unites States, surpassing what had previously been the group with the biggest influx, Hispanics. In 2010, there were 430,000 Asian immigrants, versus 370,000 (or 36 percent of all immigrants versus 31).
Posted by Queens Crapper at 12:08 AM

there be a lot of asian humpin goin on, bubba......check out the queens pre-k classes and school buses.

We should allow more European minorities into this country. Diversity also means allowing white skinned people to allow residency. If 12 million illegals of Hispanics origin are allowed to remain here what about Caucasian be allowed the same treatment! White is awesome too!

No big deal - Asians are good people but do not assimilate well.

They get rich by collecting all the soda and beer bottles that Americans are too lazy to refund. Very lucrative for them. They take that money and send for their relatives.

And you thought the White/Black achievement gap was bad!

War is peace,
Freedom is slavery,
Ignorance is strength,
Diversity is our strength!

And the Ragusa-Ognibene faction feud goes on while a goldmine of potential Republican voters gets neglected.

#2 ...the 1965 Immigration and Naturalization Act (L.B.J/Ted Kennedy ,democrats) only permits a smaller percent of Europeans (minority or caucasian), compared to a greater number of legal immigrants , from S.America,and S.E Asia, to enter the U.S.

the Continent of Europe ,since 1965, is booming with Asian,African,Middle Easterners, whose large families love the socialist's paying for their freeloading lifestyles.

my Scandanavian inlaws are very upset with this invasion of their country , enabled by the "QUISLINGS" (TRAITORS) in their socialist government.

Assimilation of Asians? The problem with Queens is how it can retain the character of being part of the United States as opposed to a block by block transformation into versions of Mexico City, Mumbai, Taipei, and Shanghai.

It is just so ridiculous how racist these comments are. You racist people folks deserve nothing but to live old and miserable. You are sick.

The Chinese and Koreans are the worst. They do not want to assimilate at all.

At least in Latino communities you have a mix of regular stores and normal grocery stores compared to the dirty Asian stores.

Wanting to protect American culture is not racist. If the rest of America saw what was going on in Queens, Obama would lose in a landslide.

A Chinese person was just telling me how many Chinese people are moving to the US because of a program where if they pay something like four hundred thousand dollars they can get greencards for themselves and their family.

Whether this is a GOOD thing is up for debate, but I will say that these Chinese people are almost certainly of a higher class of people than many of the commenters here.

"The problem with Queens is how it can retain the character of being part of the United States as opposed to a block by block transformation into versions of Mexico City, Mumbai, Taipei, and Shanghai."

Funny comment... I used the same analogy when my friend asked me what is Queens in general like when he was planning for a visit to Queens.. All he heard was ghetto, but wanted to know the real truth. I told him you can travel to many different foreign cities or countries within 2 hour :

search the D.O.Education ,NYC website and you will see all of these above multicultural languages expressed for the parents ,who can not speak the Nation's language, ENGLISH....

the same thing is happening at the nyc election headquarters.

it is stated on the web that the national vote counting for 26 states in 2012 ,will be done in Spain, by a spanish on-line voting company ,SCYTL??

A Korean friend of mine said that in South Korea there are more prominent English writing on the store signs than the Korean stores on Northern Blvd.

The Koreans and Chinese are colonizers. I do hold out hope their children will assimilate better as they move out of these Asian ghettos in Queens.

I keep telling you - the commenters here are not RACISTS.

As an asian person, the american culture is not something I'd like to embrace. I do not agree with the parenting style. American kids are loud and obnoxious and lack humility and a good sense of hard work. Education is not a priority to most american parents (and they coddle their kids way too much). It seems like getting on American Idol is the most amazing achievement a teenager can accomplish here. American television and music is overly sexualized and violent. The cussing on television is downright disgusting. American young girls become sexualize way too young.

As an asian person I try really hard so my child doesn't become "americanized"?? I want him or her to value hard work and compete in a global market. I never want him to feel, he's entitled to things. Isn't that what the American dream was based on - hard work, blood, toil, honesty and compassion? It seems most american have forgetten and are just sitting around demanding their government fix things. My american neighbor is just like that. While you guys whine and complain and demand things, immigrant who don't demand things are taking away all your skills from beneath your nose. Yes it's a global market now, wake up and teach your kids that, so they have a chance to compete. Stop living like it's 50 years ago.

When I went to college mostly russians, asians (chinese, and indians), and middle easterners were majoring in the tough math and science majors. My american neighbor's daughter just graduated from college in some major that I would never waste money on. It'll probably be hard for her to find a good paying job. That's just silly to me, why would you let your kids major in stuff you know has no future? Then you act like it's the governments fault.

Well, that's my 2 cents. Some of you might disagree. But there's plenty of money to be made by everyone if you're willing to roll up your sleeves and work hard. It's just too bad most americans are too lazy and think life should be easy. That mentality will be deadly to any country's prosperity

The American "dream" [whatever that is] is probably based on Life, Liberty, and the Pursuit of Happiness.

Blood" and "toil"? American ingenuity found an easier way to build the Great Wall and the Pyramids.

"It seems most american have forgetten and are just sitting around demanding their government fix things."
That's why Punjabi and Hindu are now included on the election ballot. ("...immigrant who don't demand things.." Yeah, right.)

And how come the Asians didn't/don't respect the architectural heritage of Flushing, home of the Remonstrance? Stand packed like a sardine on the corner of Roosevelt and Main on a Saturday afternoon.

Yes, no one doubts America's past greatness. It certainly was great.
But it's like the great high school jock who's stuck in his glory days. America is in a terrible debt and it's not looking good. Yes America WAS great. She could probably build the Spinx,
Great Pyramid or Great Wall with true innovation and not blood, sweat and tears. But so what? That's not the case now. Kids here can barely do any math. Reading levels are abysmally low. Not to mention the obesity.
They can't compete with a growing global world.

Go to any college campus. And you will see exactly what I am saying. Go to all the different departments and see for yourself
what kind of students major in what kind of studies. That way you won't be surprised when people of color wind up filling high level positions. And you won't wind up blaming it on affirmative action. Few american kids
major in the sciences, math, finance or anything solid.

Don't use your hatred of immigrants to scapegoat America's problems (much like what the German's did to the Jews). The countless wars America chooses to fight is what's REALLY crippling the entire country. If you can see past your prejudice of immigrants you might actually see what's really going on in this country.

Trust me Mr. Asian commenter, the last thing Americans will be doing is embracing your Asian culture of filthy stores, rudeness, insularity, and little to no social skills.

And I'd love to know why there are so many poor Asians rummaging through my recycling bin every night and the throngs on Medicaid and food stamps if their "culture" is wonderful and fosters such quality advancement and growth.

Thankfully the other minority groups, along with the whites, will never take part in the Ho Chi Min - ification of American culture.

latinas are better lovers, but asian girls have lower standards and will take anything...win win situation