Bridge to be named after Dinkins? 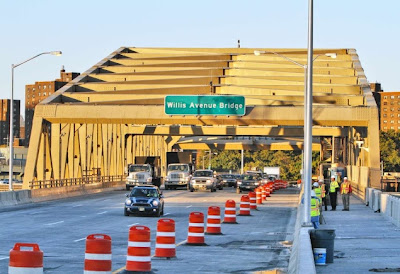 Ed Koch has a bridge named after him, so why not David Dinkins?

That’s the question City Councilman Fernando Cabrera will ask Thursday when he introduces a bill to rename the Willis Avenue Bridge after New York’s first and only African-American mayor.

“David Dinkins was a political pioneer,” said Cabrera (D-Bronx). “Nobody knows who Willis was. But Dinkins was the mayor who turned the city around.”

Mr. Cabrera believes in revisionist history, apparently.
Posted by Queens Crapper at 12:03 AM

Dinkins was the worst mayor NYC ever had.
Name the sewer treatment plant after him instead.
We really have enough money for this crap?

What's with naming bridges while the person is still living???!!
Wait until they are dead, then we'll decide!

he was at arthur ashe tennis stadium in flushing , while the rioters in bklyn were murdering people.he did not respond for two days.

2500 homicides a year ,until Rudy G. and his n.y.p.d. (Jack Maple ,Bill Bratton etc. and their anti-crime tactics lowered it to 400/year.

the majority of those citizens saved from death were minorities.
Dinkins did not pay his income taxes for four years ????

Politicians, please stop with the renaming of stuff!

All it does is annoy people.

These names were widely used for decades and descriptive of the items themselves.

True, there are some landmarks that were renamed after they were built (the GWB started out as the Hudson River Bridge) but enough already!

I'd rather politicians at least try to make it LOOK as though they're doing something worthwhile.

Best remembered in connection with the Crown Heights riots in 1991. Name a bridge there for him.

Why not name the shithouses at the tennis center after him?

Name a bridge after stinky Dinky??? I think not. We've had some clunkers as mayor, but he was by far the worst in my lifetime (I go back to Wagner).

do you think the original bridge was named for bruce, or the TV "willis" ?

my search found a new york, poet,magazine editor, writer, Nathaniel Parker Willis 1806-1867, who built a 14 room cottage on the cliffs on the Hudson River, south of Newbergh, N.Y.

all nyc bookstores closed on the day of his funeral.

he published the"Home Journal", which is now "Town and Country "

i could not find a connection to the bridge naming ?

Our Queens pols, fearing political correctness will go along with the renaming, I am sure.

Dinkins was an ineffective one-term mayor, but he is still the first black mayor, which is far more important than any of his achievements or failures while in office.

Just for being the first black mayor, he deserves a bridge, apparently.

did he inadvertently not disclose over a million dollars in income financial disclosure on applications for the mayoralty election ?

but a letter from many years prior appeared and the money had been given to his son, allegedly.

There's a book around called "History in Asphalt," written by John McNamara. It gives the specific information on virtually every street with a name in the Bronx.

The playground, school, and avenue are all named to honor Edward Willis, a real estate businessman in the 1860s, whose property spanned East 143rd Street between Alexander Avenue and what is now Willis Avenue. Although not much is known about Mr. Willis, his namesakes, which also include a bridge, have spread his legacy throughout the Bronx.

Funny how a citizen can find this information on a city website, but a local politician cannot.

my late teen years.1946-51 were spent playing basketball in the Uptown section of Manhattan.
A very wise young patriot from Harlem was playing sports then also, but also developing his superior scholastic record.

i nominate Thomas Sowell, originally from Harlem,N.Y.. A graduate of the nyc public school system and Harvard/Stamford. A Conservative writer and analyst, presently.

google his name , his opinions have common sense.
and he paid his taxes on time.....

although the progressives would protest wildly, the sound of " THOMAS SOWELL BRIDGE " appeals to me.

a copy of this comment strip should be e-mailed to the NY City Council.
i will ,if i can get instructions from a commenter.

Just what Dinkins deserves...an obscure bridge for a lackluster mayor. What will they name for De Blasio....a bridge in Moscow...fitting for an American socialist liberal?

Notice how the "Black man" still has to sit in the back of the bus. The Willis Ave. bridge is not exactly a first line icon to immortalize one's memory with.