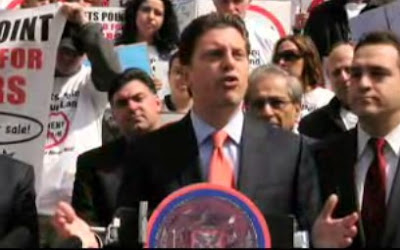 November 2007: ...Queens Councilman Eric Gioia stated that he was troubled by the concept of eminent domain and noted it was a slippery slope as to when it necessary and reasonable for the government to use eminent domain.

April 2008: Councilman Eric N. Gioia...of Queens said the threat of eminent domain, even as a last resort, was “like walking into a negotiation, putting a gun on the table, and saying, ‘I’d like to strike a fair deal; I’ll only use the gun if I have to.’”

Despite this, Eric voted "yes" to eminent domain abuse at Willets Point on November 13th, 2008.

From the Public Advocate candidate himself: I realize I’m living the American Dream. And anyone who is willing to work hard and do right should have access to the opportunities to make their dreams happen.* That’s the city I want to live in: a true city of opportunity...where the middle class can thrive, and where those working to get to the middle class can succeed.” (*except at Willets Point)

Read the rest of Team Gioia's propaganda and see if you can find ridding the City of eminent domain abuse mentioned anywhere as a priority.

On the other hand, Public Advocate candidate Norm Siegel has the issue at the top of his no-no list:

When the State/City uses eminent domain to take New Yorkers’ homes and businesses for private sports arenas, private universities’ expansion plans and private developers - a Siegel Public Advocate’s office would fight to stop that.
Posted by Queens Crapper at 12:43 AM

When you look at the list of declared candidates, Siegel is clearly the best.

...Queens Councilman Eric Gioia stated that he was troubled by the concept of eminent domain and noted it was a slippery slope as to when it necessary and reasonable for the government to use eminent domain.
YES UNTILL HE GOT HIS PAY DAY LIKE HIRAM ASS A RAT .ITS ALL ABOUT THE MONEY FOT THESE GUYS MONEY MONEY MONEY VOTE THEM OUT NO 3RD TERM

This guy has done jack shit as our community is destroyed.

All he does is run over to Queensbridge to keep 'em happy and quiet.

I concur with the guy who said he has done jack shit for our community. The graffiti is a constant, and even worse the garbage cans that are provided by "Councilman Eric Gioia" are constantly overflowing with trash.

Well, folks, little weasels like this get a free pass in the septic culture of Queens politics: lapdog press, political community board, clueless seniors, and transient community.

And no effort at public education.

Im not too up on all of Gioia's actions. what did he do (or didnt do) for SS gardens?

I agree with "woodsider", i see the garbage all of the street by the sponsored cans.