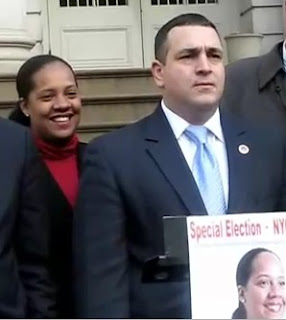 The name-dropping shows some continuity of support among other elected officials despite the now-unhelpful qualification that was once perceived to be Ferraras' biggest strength: her job as chief of staff to Councilman Hiram Monserrate, who is supposed to be leaving the Council for the State Senate.

Before that, Ferraras was tied to a non-profit group whose financial relationship with Monserrate has been questioned.

Well this one seems simple enough. If we can't shame the State Senate to not seat Monster-ate, then we have to defeat his self-appointed successor.

These specials are non-partisan affairs that rely on GOTV more than anything else. Party affiliations, Parkside Group Connections et. al. are not as important as getting voters out, so let's get our people in the 21st to send Julissa Ferraras home.

Wait Wade! She seems to be running against the machine hack.

Wow Wade! How would you like to live in that district?

julissa ferraras is a monster-rat clone. will do everything he did, business as usual . what about hirams man wayne another political hack and cover-upper. get rid of them all they all are a bunch of crooks it's almost time for another tea party

vote her out she is no diffrent then hiram monsterassarat and next she'll cut her man .we dont need these kind of people.

yeah right..As a resident of the community I'd like to see if someone really gives two sh*ts about the crime, lack of schools, crappy streets and sidewalks, the overdevelopment, the list goes on and on...Really its hack against the other...