The disturbing condition of Bayside Cemetery 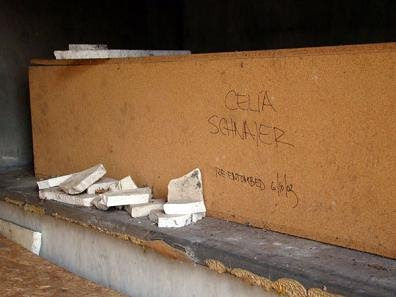 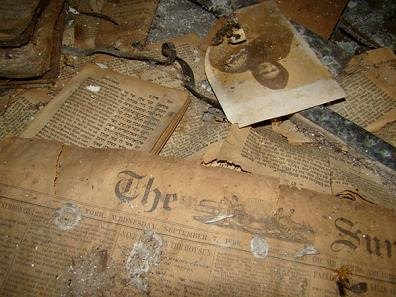 I knew things were bad at Bayside Cemetery, but I had no idea they were this bad. How disgusting.
Posted by Queens Crapper at 12:00 AM

Is it my imagination, or was Queens Historical Society supposed to be taking a lead role in cleaning up cemetaries.

They took over Moore-Jackson to get a foot in the door in western Queens.

No wonder they are Terri's poster child.

Send this to Bloomberg. He has the personal money to clean this up.

Reminds me of Mt Micheals two decades ago.

Reused the plots and took the stones over to Socrates for landscaping.

Another borough historian that gave two shits when notified.

Shame on the decendants of the deceased for not being more vocal on the cemetery's upkeep.

Funny they go ape shit when nazi knuckleheads destroy Jewish cemetaries, then when they do it themselves they look blandly on

Wow what an amazing site that is! I could look at it all day. Thanks for the link to it.

Wow, that was pretty amazing and sad. I mean, you can see the casket in one of the photos.

Bad Bad Carma. This needs to be cleaned up somehow.

What a shame and disrespect for the dead.

i was buried in that cemetery once time

Bayside Acacia: For the record.
This from the administrative offices of Acacia Cemetery and Mokom Sholom Cemetery, who have just recently became aware of this Citynoise news item and the series of comments, thereafter, by concerned individuals regarding this sensitive issue.
1. Acacia Cemetery is not Bayside Cemetery. They are two separate entities. Although adjoining neighbors, they have never been legally attached nor have they ever been operated by the same staff.
2. Acacia is east of Bayside and there is no fence between the two cemeteries allowing one to easily walk throughout the entire border line from one cemetery to the other.
3. Mokom Sholom Cemetery, located on the west side of Bayside Cemetery, is also a different entity.
4. There is a 6 foot cyclone fence along the border between Mokom Sholom Cemetery and Bayside Cemetery.
5. Any Internet aerial view depicts the difference in appearance of Acacia on the east and Mokom Sholom on the west, which are both cleared and maintained. It is a visual indication of the actual borders.
6. Both Acacia Cemetery and Mokom Sholom Cemetery, for more than 30 years, are each independent Not-for-Profit Corporations. The owners of Bayside have always been a Religious Corporation.
7. Being Not-for-Profit Corporations the operators of Acacia and Mokom Sholom are answerable to the NYS, Department of State, Division of Cemeteries. The operators of Bayside, being a religious corporation, are not answerable to government.
8. There has been no official nor meaningful communication by Bayside’s owners with either Acacia's or Mokom Sholom's administrative offices or operators for at least twenty years.
9. There has been no official communication by any Jewish communal organization with either Acacia's or Mokom Sholom's administrative offices or operators related to the Bayside situation for at least twenty years.
10. There were a few discussions, the last being more than ten years ago, with Acacia's and Mokom Sholom's administrative offices, with individual local community Rabbis regarding their personal concerns about the Bayside situation. They all understood that they have no influence nor input with the Bayside owners and were powerless in curing the problems .

11. The cell tower, which appears as a flag pole with the stars and stripes displayed, is located on Mokom Sholom Cemetery situated exactly in the area on which an abandoned storage building once stood. The building was removed with NYC and NYS approvals just prior to the tower being erected. The old building, pre demolition, is still visible on Google and other aerial maps.
12. The NYPD has tried, as best they can, to police the perimeter of the three cemeteries yet there still is a concern about unauthorized entry since overgrowth in Bayside, as per the opinion of local law enforcement, seems to attract vandals.
13. This past year a contractor, funded by charity monies, began to clear Bayside Cemetery of the small low thin overgrowth. However, unless continuously funded, this well intentioned effort, logically, would be for naught.14. The last resort for the reasonable or even minimal maintenance of cemeteries that have few or no grave sales, surviving plot owner families who annually pay for care, nor burials or other income producing activity are the cemetery trust funds.
15. There are two basic types of trust funds in cemeteries. One is a Perpetual Care (PC)Fund, which is really endowed care. The other is a Permanent Maintenance (PM) Fund. PC is paid by families of deceased to the cemetery operating corporation. It is not paid to societies or any other group that originally purchased the land from the operating corporation. Moreover, societies rarely, if ever, pay for PC of their individual cemetery sections. This is left to the individual families, ( surviving spouses, children, etc.) post or pre burials. The monies in the PM fund are generated by the administrative and or operating entity. They, per NYS regulations, are obligated to segregate no less than 10% of the gross income derived from grave sales which are then deposited into the fund. Also, no less than $35.00, per NYS regulations, from the cemetery grave opening charges from each burial, is likewise deposited into the PM Fund.

16. The interest income, only, from the PC Fund is to be used for the care of the selected endowed graves, plots and mausoleums and not otherwise. The interest income, only, from the PM Fund can be used to support the upkeep of the cemetery infrastructure (roads, paths, fencing, etc.)
17. The principle (which is all the money deposited) of the Cemetery trusts, PC Fund or PM Fund, cannot, per Law, be allocated or spent. There is no exception to the rule. A portion of the capital gains from the PM Fund, with prior written government approval, can be used for cemetery infrastructure repair if justified by documented need.
18. As only one example of how far Bayside and Acacia are apart as entities, there is a society that owns parcels in both Acacia and Bayside. More than 10 years ago they requested that the Acacia ground crews annually clear their two small land parcels in Bayside of overgrowth. This, because they claimed Bayside was irresponsible nor trustworthy when previously paid for care. Approximately five years ago, Acacia workers, although properly insured, were refused further entry into Bayside by both the Temple's previous Rabbi and the two on site Bayside cemetery workers. The workers threatening they would have them arrested for trespass if they cleared the grounds or even walked across the common fenceless border.
19. The opening photo of a road in a cemetery is the road in Acacia Cemetery. The photographer may have not known where he was standing since he titled the photo Bayside Acacia Cemetery. Please note the cut grass, although browned from winter, and the well kept appearance on both sides of the road, Given all the other photo themes, this could not be Bayside.
20. The recent well publicized law suit against Congregation Shaare Zedek, the owners of Bayside Cemetery, does not assume nor documents any linkage or relationship with either Acacia Cemetery or Mokom Sholom Cemetery.
Given the facts as now presented and as a personal request from the collective administrative staffs of both Acacia and Mokom Sholom, we ask that the implied “Bayside Acacia” connection by any and all concerned people please cease. There is no logical reason to further frighten families, with loved ones buried in Acacia or even Mokom Sholom, who may internet search, find and read that there is a single entity or owner that operates Bayside along with any of the other two cemeteries. Thank you.

excellent points and the details are more specific than somewhere else, thanks.

This is disgusting..Aren't the Dead supposed to be Resting in Peace? SHAME ON THE PEOPLE that allowed this to happen.