Cuomo blames Staten Island, but data says something else

Not for lack of political willpower, Staten Island has come to represent 25% of all COVID-19 deaths in New York City amid the second wave of the pandemic, even though the borough represents just 5% of the city's population. Governor Andrew Cuomo, during a Wednesday press conference, emphasized the political nature of this reality as a direct result of misdirection from local leaders taking opposition to guidelines from the Centers for Disease Control and Prevention, which have influenced some of the measures put in place by the state limiting dining and other activities.

Okay, now here's the actual data from NYCDOH's site as of yesterday. 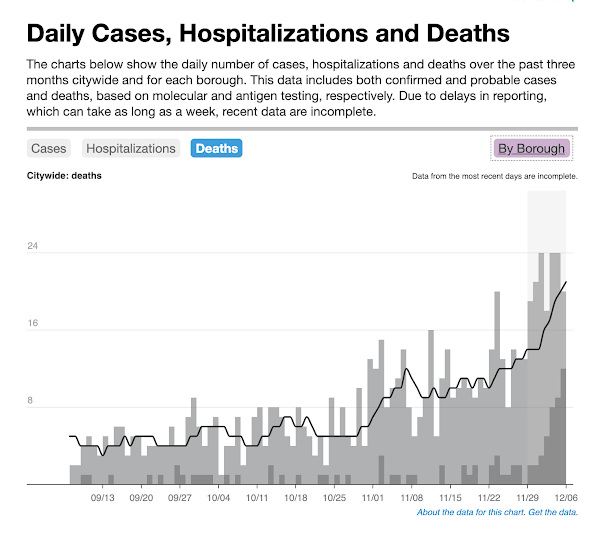 Looks like a total of 20 COVID deaths per day in the entire city. 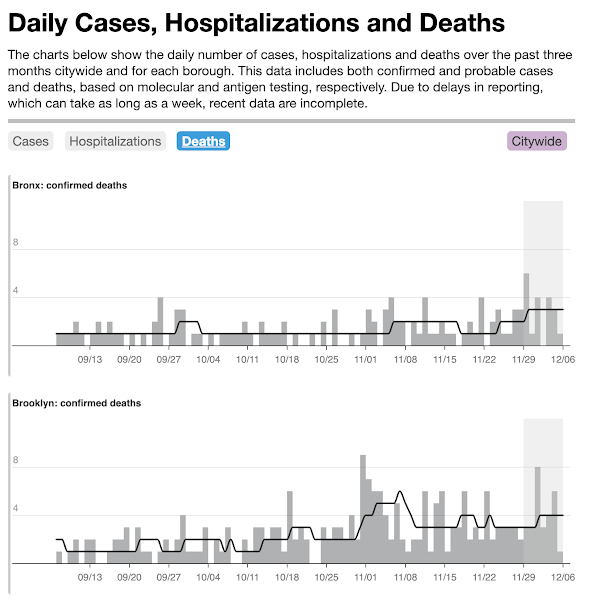 Bronx has about 3 deaths per day, Brooklyn has 4. 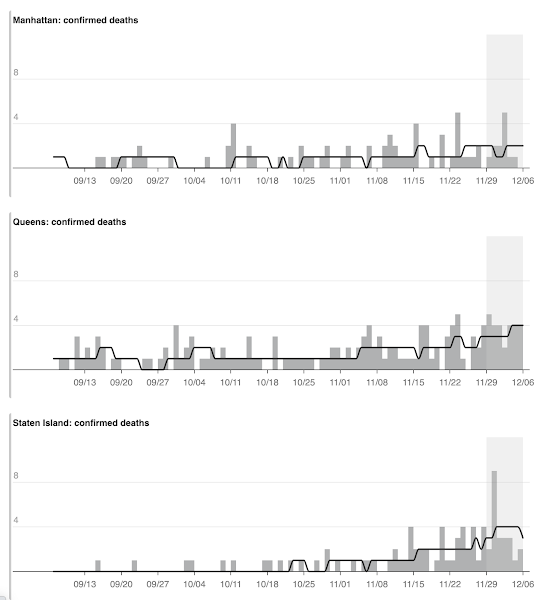 Manhattan has about 2 deaths per day, Queens and Staten Island have 4.

Isn't 20 deaths a day relatively small compared to where we were back in April? 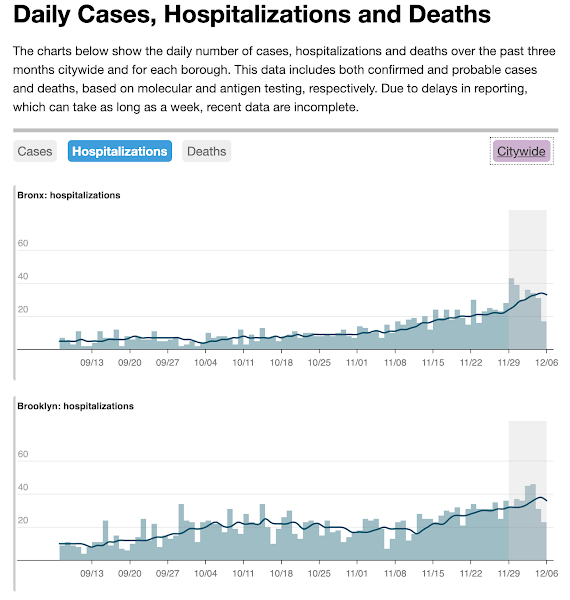 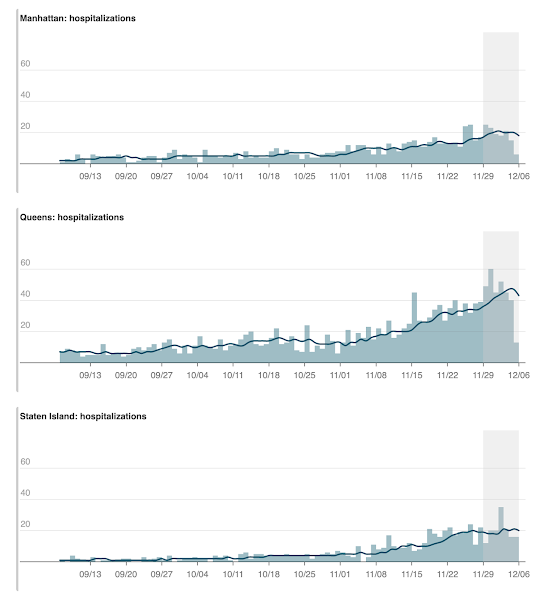 This doesn't really look all that skewed. 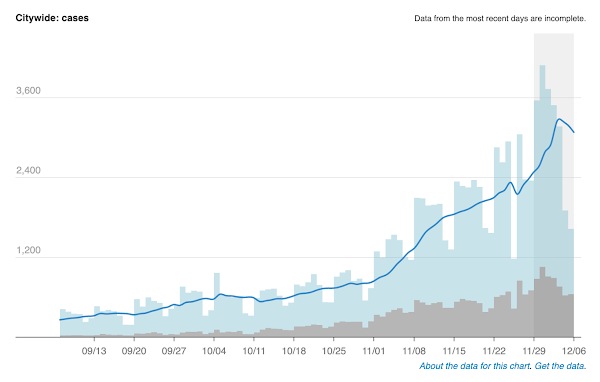 On 12/1, the city had 4088 new cases, while Staten Island had 342. This translates to ~8% of infections. Two other boroughs have roughly the same number of deaths that SI does but a lot more cases. If the death rate on SI is worse than anywhere else, the reasons probably have more to do with the overall health of the population and the quality of the care there than "if only they had worn masks!"

So, why are you reading all of this here rather than in the paid media who investigates nothing Cuomo says?
Posted by Queens Crapper at 12:00 AM

It must be a coincidence that Cuomo chose that color to justify lockdowns.

Kind of like how the threat level was always at orange during the war on terror under Bush and Cheney.

Does the Gauleiter of NY EVER shut his piehole?

Moe said...
A song needs to be written about Cuomo, the title should be "Failed State".
It would be very popular, everybody could sing along waiting for the stimulus check!

Do we shut down the world for every low risk in the world? C'mon man!
Despite the social media monopoly, 75 million people still voted Trump.

I have always wondered what the real death rate from covid is in flushing? Cuomo tried telling us that there is no possible way that asians live in ny because the flights from Asia come in through California so basically only European people live on the east coast and those European people or ones that visited Europe bought the disease back with them. So Cuomo really can't be trusted in things he says because in his mind he thinks connecting flights don't exist even.

Staten Island has fewer than 475000 people living on it. For it to have such a large percentage of both covid cases and deaths is concerning. Preventative measures are certainly justified.

"Preventative measures are certainly justified"
"Go ahead" I say in my best Dirty Harry voice, "Make me pay."

“ I have always wondered what the real death rate from covid is in flushing? Cuomo tried telling us that there is no possible way that asians live in ny because the flights from Asia come in through California so basically only European people live on the east coast and those European people or ones that visited Europe bought the disease back with them. So Cuomo really can't be trusted in things he says because in his mind he thinks connecting flights don't exist even.”

We know the Chinese in Flushing couldn’t have been carriers because those infected in NY have the strain that came from Europe not Wuhan or China. This virus has already mutated into different strains.

Second, restaurants and supermarkets were closed in Flushing because workers refused to go to work after they saw what was going on in Wuhan from Chinese social media. Even to this day, I went to a Chinese supermarket and they were the first ones to set up plastic shields and workers all wear gloves and masks. Prepared food are packaged and unlike a local supermarket run by non Chinese, they have buffet food where you can still use things and ladles to get your own food.

Asian countries went through SARS. They already went through this already. The rest of the world didn’t face it, except for countries like Liberia that had to deal with Ebola or Brazil with the Zika virus which originated in Africa but spread and made its way to countries like Brazil.

The Spanish Flu has been proven its has been around after the pandemic as it became a seasonal flu and jumped fro humans to pigs to become the swine flu. Here’s some excellent articles about this and why scientist can may some educated lines of thought by looking at the Spanish flu.

Italy’s first known carrier was a runner or cyclist that came back from China. Seattle’s nursing home was caused by an American who came from Wuhan. When the virus hit NYC, no Chinese American that visited China was identified as having this novel virus. Scientists identified the strain in the infected came from the European strain.

"Preventative measures are certainly justified"
Oh. Maybe your eyes are closed. That’s okay if you’re okay with it.