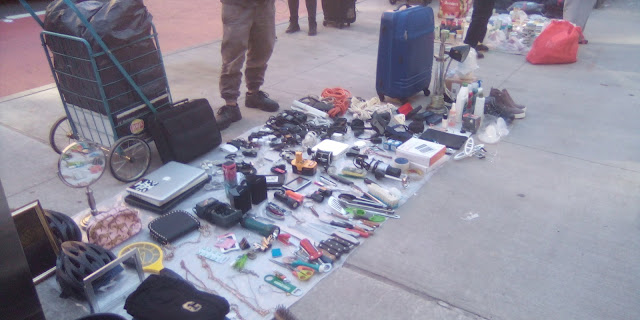 Illegal street peddlers hawking such items have taken over the outer boroughs, clogging sidewalks with their second-hand wares and pulling customers from pandemic-ravaged mom-and-pop shops.

And everybody is pointing the finger at Mayor de Blasio.

From Brooklyn to the Bronx, Staten Island and Queens, folding tables and mats rolled out on the ground force pedestrians to go single-file or step aside so they don’t get run over.

In the Bronx, 149th Street and Fordham Road are hotspots. So is Fifth Avenue in Brooklyn’s Sunset Park and Flushing’s Main Street, especially the few blocks from the Post Office at Sanford Avenue to the 7 Train station at Roosevelt Avenue.

On Main, between Sanford and 41st Avenue, The Post counted 27 street vendors – on just one side of the street. Two pulled out yellow licenses, showing they’re military veterans. Six shook their heads like they didn’t understand English. The others turned away or looked down when asked to show their licenses.

DianSong Yu of the Flushing Business Improvement District estimates 90 percent of the vendors aren’t licensed. Citywide, the number of all kinds of vendors stands at roughly 20,000, according to the Street Vendor Project, an advocacy group. But legit general merchandise license-holders, not including mobile food vendors, total a few thousand.

“It’s a very tough time for everybody, we get it,” Yu told The Post. “But we need to be fair to the local merchant who are paying very high rent and taxes. And they’re hurting.”

Bobby has a yellow license for his spot on Main — and he’s mad about the infiltrators. “They’re robbing the city of taxes. They’re taking money from the veterans. They’re taking jobs,” said Bobby, who wouldn’t give his last name but told The Post he fought in Vietnam.

More Thirdworldization of NYC. Soon enough NYC will be hardly distinguishable from any 3rd World city outside of this country.

Main Street Flushing, home of my annual $25 Rolex (now $35).
Its a great place to get Camera SD cards and oddball electronic odds & ends, CR3025 Lithium coin cell battery's, cables, Webcams and assorted computer stuff etc.
Its all made in China, the same shit sold in Staple's in the fancy Logitech & HP boxes for 10X the price. Same IC chips & PC boards inside.
Simple grab, pay your $2 and get the hell out, no calculating tax and change.
It reminds me of Canal Street in the 1970s. Gray market sidewalk vending circumvents the greedy mobbed up channels of distribution and price setting.
Pick you evil I guess.
deBlasio don't give a shit, black people downtown Jamaica, the Jews around Delancey St Manhattan all do the same thing and MORE of it.
Unsanctioned sidewalk vending, some poor schmuck selling hot pretzels has always been part of NYC and it should not be culled to protect some corporation out in the Midwest. KIMCO's strip malls & Walmart included.

Once the little people are run outta town, gone and killed off you never get them back "lose your choice" and that's Communism in my opinion.

At least people of color are not being harassed by the racist police who are looking to shoot them all down for just selling illegal churros and 99 cent crap on the sidewalk.

No complaining, this is what everyone wanted, no police enforcement of these things. So we have to embrace and enjoy this wonderful experience.

People need to make money to eat and pay bills.
Not everyone wants welfare cheese from the Govermrnt Tit.
Good people try to earn a living before asking someone else to pay the tab.

@Joe got a good point.
To add to that, is the good ole NY Post really standing up for the little man? The poor victimized "mom-and-pop" stores of Flushing? What they really mean by "mom-and-pop" are McD's, B.K, Staples, Target, Home Depot, Amazon etc. Rupert Murdoch and the Fascists could care less about Mom and Pop, or John Boy or Mary Ellen for that matter.
This is the real free market at work, not the fake corporate subsidized free market that the right rave on about, but hate every bit of when they get it. You want a sanatized Mc.City? Go to nearly any other city in the USA which are nothing more than oversized strip malls.
Queens, or at least parts of it, are one of the few holdouts against the cloning of corporate America. Thats why some of us love it, and the rest or you; Well what the hell are you dong here? Go read about the latest Taco-Bell Sunday special in whatever suburban wasteland you care so much about.

You left out the best part about the woman getting sick from buying crabs on the street that had worms in it.

So what is problem?

Deleting comments that are inconvenient?

You see, you are coming around. The same corporations who made a shitload of money, who support Biden and the corrupt system.
When corporations are in bed with the politicians - that's fascism.

@Bored So You can make sense when you want too !
Happy New Year...

I have no problem with sidewalk selling, that's New York and always been.
But these nasty black market bush meats, bats, frogs, snakes being sold & traded secretly in the back rooms of these Flushing and Chinatown markets gotta go !!!
Most all that shit these Chinese butcher & eat (sometimes raw) carry's all different types of parasites and Corona viruses. This shit needs hard enforcement to stop it !!

Most all that shit these Chinese butcher & eat (sometimes raw) carry's all different types of parasites and Corona viruses.

you full of it pal. right now your have 5-6 type of corona viruses in your system.
the PCR test does NOT detect viruses since is a GENOME test, amplified 30x+ to show genetic
traces. in essence you, we are the virus. no SARS-COV2 was ever isolated based on OFFICIAL data from the CDC.

Is the seasonal flu virus, made out to be some huge pandemic (like Ebola would be).

The lords of the world are using it to usher in a new control system, you see the old system failed.

Fools - is about our country not corrupt Republican and Democrat politicians, governors, DA-s. Wake up!

Stop trying to steer the narrative like schools teach college kids.
Yes human corona and other viruses are part of our systems just like the AIDs viruses in green African monkeys.
We know that, the point AND FACT is:
Humans do not have immunity to corona viruses found in bats, frogs, snakes, ant eaters and assorted other animals that eat mosquitos. That's why anti-malaria drugs effect Corona virus.

When one consumes bat brain soup with noodles the virus can cross over into human. Slaughtering these bush animals, animal parts, brains kept in these filthy Asian wet markets also creates massive cross-contamination of everything including the sidewalks a sewer systems.
Its a dangerous 3rd world behavior and quack medicine that created this mess!
I seen the frogs, eels, crabs, watersnakes live in the filthy black stinky water fishtanks in these Asian markets. It makes one want to throw up instantly. No doubt cross contamination is the norm in these markets. It was so disgusting the poor eels were keeping their heads above the water to breath and were trying to get out. I cant believe this shit is going on in this country.

Humans do not have immunity to corona viruses found in bats, frogs, snakes, ant eaters and assorted other animals that eat mosquitos. That's why anti-malaria drugs effect Corona virus.

You my friend have no idea what a VIRUS is. You are trying to tell us we have evolved for thousands of years with no immunity against diseases.

Must be a proud product of the propaganda education system.

Leave the green monkey's alone, if you ever had an AIDS test you know is not a direct test for the AIDS virus.

The bat story is cool, but is NOT SCIENTIFICALLY proven. H1N1 is. So is SARS-Cov2 (aka COVID-19 for stupid Americans), however there is no virus isolate. CDC says so, I can prove it. So what the FFFFF we are talking about?

Bill "Mengele" Gates known eugenist, Frauduci, Gates' boy with $500 Million interest in the vaccine business - they want to vaccinate the world against what???? Bill Gates a college dropout, established thief, never wrote a code in his life! Can prove it! Frauduci non-elected medical dictator with personal stake in vaccines, proven fraud way back with the AIDS vaccines.

So come again. With facts.

Shit, these conspiracy people and anti-vaccination are going crazy.
Good, don't get vaccinated more for us !
Just remember if you catch SARS-Cov2 and you immune system cant overcome it don't blame anybody else but yourself.
Not everybody's immune system can fight this, especially Americans--elders, COPD people and people that have had organ transplants who's immune systems are suppressed with antirejection medications.
We are not all Wuhan, Amazon & African bush & mountain people who been eating bats and anything else that moves for generations.

Leave the green monkey's alone ?
What about the poor EEls you discriminating racist

Shit, these conspiracy people and anti-vaccination are going crazy.

Seems you the only one going crazy here.