A neighbor said the three-story house was vacant and that the men who died were squatters.

There were more than 60 people living in the house in early 2020, according to a complaint received by the city Department of Buildings in January 2020 from someone who wanted to rent a room there and “witnessed people using drugs and the whole house smell of marijuana.”

The DOB had issued a partial vacate order in February 2018 because the basement was illegally converted into six living units. 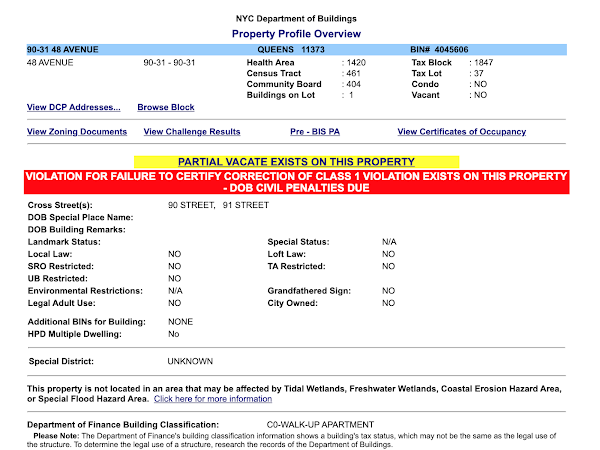 Update: Another person was found dead in the house
Posted by Queens Crapper at 9:35 AM

Will be classified as COVID-19.

Now they will build a house that will [illegally] hold 12 illegal families in it. This city is right down the shitter and mayor dumbdumb is the king of shit!

On the bright side, they can still vote democrat in the next election.

And you losers still live there complaining about it year after year, lol, morons.

As this gets more news attention, it's starting to look like they weren't squatting at all and the slumlord was probably still renting those rooms.

May they rest in peace.

@JQ LLC I use to rent in Flushing and this has been going on for years and years.
The Civic Associations likes to make nice nice with our Electurds and nothing happens to these slum lords. (DOB LS4 Posted-Big Deal) Jacob Riis must be turning in his grave.

Squatters my ass. This place was renting out rooms like a SRO. They were packing them in like sardines for cash.
I don't understand why the buildings department was not able to secure a warrant for this location after so many complaints. It was clearly done in the light of day not not under the darkness of night.
The laws are a fucking joke and let the finger pointing begin like every other time before this. And nothing ever gets done and people die needlessly because of greed.
It's all part of the great mosaic. WHAT A FUCKING JOKE.

Affordable housing. De Blahsio was in favor of this sort of thing-- basement "apartments" and even garages and sheds turned into "apartments." He proposed that! We have to house the illegals somewhere, right?

I'm sure the landlord made all the right political donations
Arson,oh were sorry,we mispoke.