He's eighteen and wants to be elected 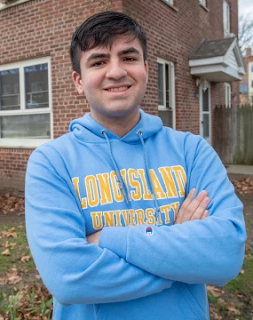 He’s barely old enough to vote, but says he’s ready to be elected.

Seth Breland, an 18-year-old Democrat from Fresh Meadows, hopes to replace City Councilman Barry Grodenchik in Northeastern Queens when he steps down at the end of next year.

If he is able to get on the ballot in November 2021 and win, Breland would be the youngest elected official in the city’s history. Former Bronx Councilman Joel Rivera, elected in 2001 at age 22, currently holds that title.

Breland, a graduate of World Journalism Preparatory High School in Flushing, who is now studying political science at Long Island University Post campus, says his age is a benefit on the campaign trail — if not for the publicity alone.

“I realize the age can be a limitation, but at the same time … it can be an advantage if I play it right,” he said. “My age will give me the sort of attention and enthusiasm to really fight for our district.”

Breland, who turned 18 in May and cast his first legal ballot in November for Joe Biden, said he was inspired to run by another young, progressive Queens politician, Rep. Alexandria Ocasio-Cortez, who was elected to Congress at age 28.

“AOC is definitely an inspiration in terms of her age. I had been following her campaign for a while at that point, and it was really inspiring to see,” he said.

150k salary + benefits, why go to college? Two terms on the council and then a couple of years of a city or state patronage job and that pension is locked and loaded!

Go get them Seth. You're just what we need.

Wow—just WOW! Now, the youngest are seeking cradle-to-grave (and, LITERALLY ‘Womb-to-Tomb’) pension AND premium healthcare benefits, versus the MASSES of ever languishing constituencies, ALL of whom continually pay the ULTIMATE, soul-crushing price.

Which is why I have stopped voting, altogether (and, long ago)!

ALAS, the UNITED STATES of AMNESIA and ENTERTAINMENT is the ONLY industrialized nation in the world that intentionally crossed STRAIGHT OVER from barbarism to decadence—without EVER bothering to devise a proper class system!

Go out into the REAL WORLD FIRST, Junior Mint—before you quickly learn to hone your graft—à la Grodencik AND ‘Little Miss Occasionally-Coherent’—the ‘FAUX-gressives’ (and, hyper-corrupt, entrenched and DemonRat, establishment-rigged) intensely incompetent public fools who obedience and fealty are eternally beholden to their corporate owners, above all else—and, the ever languishing public be eternally duped, bilked, scammed and damned!

“The system cannot be fixed by the system.” —Tom Morello

Life is a never-ending battle: If you do not enter it armed—then, SURRENDER IMMEDIATELY!

“Anarchy doesn’t mean ‘out of control’; it means out of THEIR control.” —Jim Dodge

“The truth does not require your participation to exist. Bullshit does.” —Terence McKenna

“I have never been one to cater to the crowd, for what they approve, I do not know, and what they know—I do not approve.” —Epicurus

“The cost of living in THIS society is a certain level of alienation.” —Terence McKenna

“To live is the rarest thing in the world. Most people exist; that is all.” —Oscar Wilde

Sealing NYC's- and this nation's-doom.

"AOC is definitely an inspiration in terms of her age. I had been following her campaign for a while at that point, and it was really inspiring to see,”

Seth is truly and amazing young man. He is articulate and hard working, but I do not see how he can continue with his college education while working as a member of the City Council. Still, this campaign is the start of something bigger and will give him the taste of forever campaigning for the rest of his life --if he finds he truly wants that. One is always going to be beholden to someone if one takes this path. Will he find that he really wants to go down this path?

To last Anonymous who laughably said that 'Little Miss Occasionally-Coherent' is an inspiration in terms of her age:

In terms of her age, she is an intensely incompetent, BrainWashington, DC, scripted, staged and contrived 'Latina wind-up doll' with a 'do nothing, know nothing' platform of epic government fail, and I should know: I am an ever languishing constituent of that dim bulb and 'FAUX-gressive' who has continually ignored my complaints, telephone calls and in-person visits to her office in Elmhurst, QUEENS. She, like the entire two-party-machine-failed duopoly DISEASE (of openly practicing criminals) DEVALUES honeesty itself——ENOUGH SAID!

Look, this is the best commie Soros money can buy. Together with the other crew and DA-s and who knows what else.
Trying to destroy the very fabric of this great country. They have been at it since the Clintons. Even JFK Jr. said the Clintons sold out this country and he was no Republican!

Corrupted the DOJ, CIA, FBI and everything in between.
Now they have this corrupt senile President-whatever and they cannot wait to put Kamala in charge. Which was the basic idea to begin with.
Pretty sad state of affairs!

Too bad he looks up to AOC. A person who has no moral values at all and who still has done nothing for her community. I guess anyone is better than mayor dumbdumb and Cuomo at this point of time anyway.
Speaking of Cuomo, notice how the media hasn't said a word again about the woman who accused him of sexual harassment? It's been 2 weeks and the media has kept that one hush hush.

Don't mock him,he could be a multimillionaire by 30 if he supports the right crooks,should have did it myself.

He looks up to AOC ?
Todays Teachers are just one part of the bigger problem of education. #DEFUNDTHEUFT

It's been 2 weeks and the media has kept that one hush hush.

MEDIA is a very kind term. PROPAGANDA ARM of the corrupt system is more like it.

So corrupting our universities, judiciary, congress, senate, da-s, governors is the way of taking over. Those of us living in Flushing remember the Manes, Chang, Huang takeover!

While some complain of "fascists" check CCP's organ harvesting program, forced labor for American corporations who all of a sudden became woke, I guess for a few cents producing their junk and selling it here for hundreds is a good business model.

You really thought this was about Trump? Trumpanzees?

Ok let me put it to you this way.

"some are either
1. stupid and ignorant
2. blackmail, corruption really willful conduct
3. beneficiary of the CCP system"

All of the above !
Wake up people. TYRANNY is upon us.