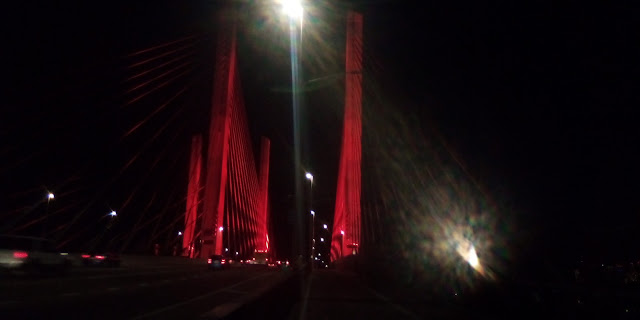 Metal-and-concrete shields that are supposed to protect the Kosciuszko Bridge from terrorists are being held together by nylon straps — following claims that the job was botched by an allegedly crooked contractor, The Post has learned.

Photos shot by The Post show that the shields surrounding all 56 cables on the Queens-bound side of the bridge appear to have been reinforced with black strapping, with some shields also showing discoloration where other staps were replaced.

A federal suit filed earlier this year alleged the anti-terror armor was plagued by “aggressive corrosion” and “severe delamination and separation of the parts” that posed “a severe and imminent threat to public safety, the implications of which cannot be overstated.”

The Post counted a total of 339 black ratchet straps cinched around the two-part shields, some of which had lengthwise gaps between the pieces that were nearly 2 inches wide.

One device was being secured with 14 straps, and several shields were marked by a white, chalky buildup around their lower edges.

Repairs also appeared to have been made along at least one cable, with the gaps in the armor filled in with some sort of caulking.

The conditions on the bridge — which was replaced last year at a cost of $873 million — appeared worse than in March, when The Post revealed that three metal straps had been installed around one of the shields.

Somebody here on QC reported that over a year ago.
The contractor or supplier fffed up with the cable that was supposed to be galvanized steel.
The cables nuts & bolts were showing signs of rust a month after it opened.
This isn't supposed to happen on a brand bridge!!

Where did the steel cable come from?
Let me guess, counterfeit unverified steel cable from China ?
This bridge will need to be rebuilt, the good strong steel truss old one should have been left alone.

It just looks cheap (and gaudy when lit up).

"Ago Gino. Wes got dis construction contract I'm telling ya. Let's spend it on some broads and buy some Cadillacs"

Ago Gino. Wes got dis construction contract I'm telling ya. Let's spend it on some broads and buy some Cadillacs

Ignorance must hurt you and I'm not even remotely Italian.

Good wind heavy trucks this Mickey Mouse work will fall in the dirty water with many cars of people. Everybody die
I know from pedal boat that water glows yellow-green when propeller stir it.
All the crooks made it same galvanization scam on Williamsburg bridge. They paint wire and bolts with oil to fool everybody to last a couple years after get paid and retire overseas. The stupid news people, disgrazia mayor and governor no say nothing.

Bridge of death.
Normally a cable snapping or replacement is no big deal the adjacent cable take the load. However with these cheapo Euro designs each cable is under more tension making it 10X more critical and the adjacent cables (and or hardware) are equally compromised.
You cant magnaflux or X-ray spun cables like you do brackets and jet engine fan blades to detect flaws and impending failure points.
Certain people should get 60 years in jail, repair will take years and be so costly it may be faster and cheaper to shut it down. You then rebuild with galvanized cables, hardware & roadway.
What a clusterfuck !!

"Ago Gino. Wes got dis construction contract I'm telling ya. Let's spend it on some broads and buy some Cadillacs"

What a bullshit racist stereotype comment.
GM hasn't built a good Caddy since 1976 so we no longer buy them.
I have 71 Corvette, 73 Thunderbird and Mercedes on full classic insurance and a Mercedes Sprinter Class C camper van conversion for work.