No, you are wrong Cuomo 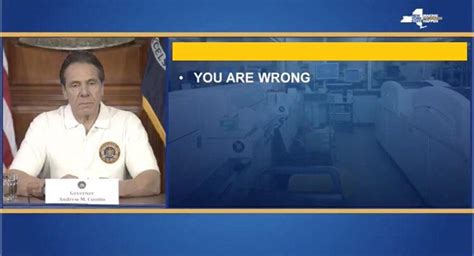 In New York and beyond, the coronavirus pandemic has ushered in an unusual new conversance with public health metrics, with government officials now using testing and hospitalization data as a gauge for the severity of the virus and important policy decisions.

No metric has drawn more attention—or controversy—than the positivity rate. The number, which measures the percent of tests that turn up positive and serves as a proxy for infection rate, has been used to justify economic reopenings as well as business and school shutdowns.

For example, Governor Andrew Cuomo has said that he would order schools to close should local positivity rate rises above 9 percent, an increasingly likely possibility given the surge of infections.

In spite of the high stakes, New York state officials have been calculating positivity on a flawed basis, according to several experts. The criticism stems from the state's decision to fold in a type of rapid test known as antigen tests, which are less sensitive than polymerase chain reaction (PCR) tests.

"That's not what the professional guidance is," said Dr. Jay Varma, Mayor Bill de Blasio's top health adviser. "It's not what the WHO does or the CDC or the Council of State and Territorial Epidemiologists does."

The Council of State and Territorial Epidemiologists, which advises the Center for Disease Control and Prevention and other health agencies, has said that a positive antigen test should be considered a probable case of COVID-19, not a confirmed case. In turn, the CDC has defined its positivity rate as based on PCR tests only.

Despite the limitation of antigen tests, their benefits are clear: the tests can provide results within 15 minutes and can cost as little as $5, whereas PCR tests cost around $100 at national labs. Antigen testing has proliferated across the country in nontraditional testing centers, like schools and nursing homes, especially as the demand for testing increases.

In New York City, the tests are now available at pharmacies, CityMDs and doctor's offices. Drawn by their quick turnaround time, many people are unaware of the caveats.

During a recent seven-day period, there were nearly 88,000 antigen tests performed in one week, although city health officials cautioned that not all antigen test results are being reported to the city.

According to Cuomo, the state performs “hundreds of thousands" of antigen tests per week.

Dr. Ian Lipkin, a renowned epidemiologist at Columbia University and testing expert, agreed with Varma that antigen tests should be separated from PCR tests. The latter are currently considered the gold standard in terms of accuracy.

"You need to distinguish those clearly," he said. "It's reasonable to say these are PCR, these are antigen, but I don't think you should mix the two."

USA elections printed in China. Well Governor and Mayor - you guys are not in it are you?

The First Crime Family (actually is the second, first are the Clintons)

So I have to read UK news to find out what is happening in my country - US of A.

Who voted for these criminals? Kidding me?

I hear that Rudy's doing great. But you won't hear it on any of the news networks. Only on this comment.

Whatever happened to the flu ?

Benito, Gitmo is waiting for you.

You killed people, businesses, pretty much destroyed NYC and NYS.

The bankers will not bail you out Benito.

You are done. Exposed for the dictator you are.