Chain stores are vanishing too 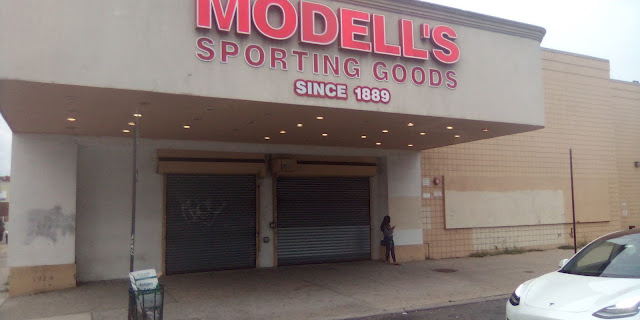 The number of chain stores in Queens dropped by more than 10 percent over the past year, according to a new report.

In all, 198 chain stores shut their doors in the borough — an 11 percent drop over the past year, according to the Center for an Urban Future’s 13th annual State of the Chains report.

Citywide, more than 1,000 chain stores — nearly one out of every seven — closed in 2020. The report defines a chain store as part of a national or regional chain that has at least two locations in New York City and at least one location outside city limits.

Queens saw the second biggest drop of the five boroughs, behind Manhattan. Twenty retailers experienced a net decline of at least three stores in Queens during 2020, according to the report
Posted by JQ LLC at 1:47 PM

Sure that eateries and bars and laundromats are still going strong.

There will always be lots of 'cleaning' to do in Queens.

What did you expect under a communist takeover?
Of course stores are vanishing. So is the middle class.
Study 1917 and what happened in Russia, Bolsheviks financed by Wall street.

More Taxes lost so the NYC middle class sheeple will have to make it up.

There is no Money Tree New Yorkers, those too young to remember or too brainwashed to read history of prior economic mistakes are going to find this out soon !

"Congress can follow the status quo: Congress can continue to borrow from our kids--the same ones whom we have locked out of schools. Congress can keep enabling the shutting down of business by force, spend all of today's money and all of tomorrow's money." R.Paul

"It doesn't have to be this way. This debt crisis is a preventable crisis. It is not too late to change our course. Cut unnecessary spending, eliminate waste, stop fighting a $50 billion per year forever war in Afghanistan. Make the hard decisions now" R.Paul

Huh, do you have any clue what insurance, taxes, water, heat, electric, plumbing work from brats throwing grease and shit down the sinks & toilets costs landlords ?
$2000 a month and up is a steal !
Not my fault the majority of these Hipsters & Millennials decided to study liberal arts and all the crap nobody will pay them for. Let them get that $100,000 college debt back from the finger-paint and music schools that took them for a ride.
Oh, lets not forget that single mom of 3 of different baby daddy's. All these black kids that think they are going to be wealthy Hip-Hop celebrity's.
Anybody remember Flavor Flav, Obama and the woman Clinton on TV telling kids at Hofstra University "Be Who You Want to Be" ? Well now we have the results of that ideology !
Oh boy did democrats, the schools and television fuck this country up good.
Over 200 million young people brainwashed, programmed and indoctrinated into shit.

Hey, Don't blame the landlords for your mistakes in life. I fucking work sometimes 7AM to 7PM, HARD WORK and I'm not obligated to share my stuff with lazy fucks sitting home on a computers doing art and getting stoned.
Learn a useful trade like plumbing, electric, masonry, modern automobile diagnostic Solar, geothermal HVAC etc. Put down the dam IPHONE and manicure kit and get a good paying job in skilled technical fields that are not only needed but cheap Mexican labor cannot compete with!!
Why ?
A: Because most these Mexicans cant read schematics, cant read at all to know all the complex codes!!

New york politicians really know how to kill an economy and make people run the other way. They hoard tax dollars for years and pay the higher ups and teachers and policemen and sanitation workers great retirement pay. Then they want to take in more and more illegals every year and the ones who work and pay taxes have to pay for them too. The working class in ny really gets screwed from the shit politicians who get elected. And we all know that our politicians are only chosen for whatever race they will cater to. You can be dumb as a brick like AOC is and get elected only because you are Hispanic or black or Asian or a white person who loves illegals and will give out freebies to those lowlives who refuse to work. You literally don't have to have brains to become a politician anymore.

That is well said, Gino. But, the new breed of entitled, arrogant, imposing, ungrateful and intolerant extremist, neo-liberal hipster turds and millennial mildew bought into the insipid 'Be Who You Want To Be' diatribes of unsuave, political worthlessness brought to you by the 'O-BOMB-YA' & Bull$hitlary Global Terrorist Shit Show of epic government, humanitarian, ecological, fiscal and spiritual fail.

I can't even hold a decent conversation with any and all of these 'WOKE,' New Age termites, when they don't even know how to conjugate a verb, much less read an entire paragraph. Hell, I would be happy to know that they read comic books (the classics would force their delicate brain chemistries to mutate). It's truly the beginning of the end,fellow existentialists, where extreme wealth determines WORTH, the truth is STILL a closely held commodity, and the end of humanism dictates how tradesman and crafstmanship are the best part of a bygone era that will never return to a tonsured, erstwhile egalitarian society ever again.

Face it, the financial reset and depopulation arbiters are working hard to rape, ravage and destroy life for ALL living things during THIS, the Fourth Industrial Revolution of death and destruction: Welcome to The Fourth World——welcome to the present AND future!

“The self-righteous rule out the possibility that THEY are what has gone wrong.” ——Mason Cooley

Got that right, I try to help those that ask for jobs. They wont get hands dirty, can not follow simple instructions like cleaning a pipe end with steel wool before fluxing and soldering, cant unspool wire properly and flat. (pull Romex cable off the end of the spool the "easy way" so it corkscrews then get mad when you correct them for the 4th time. You bring them in so they can learn valued needed skills but NO they demand instant $60 -$150 Hr pay. These lazy fucks cant carry , 4X8 sheetrock, tool bag, pipe threader or floor sander without getting winded. Sit down to "rest" and play facebooks and video games on the phones...then quit if you say something like WTF ARE YOU DOING GET BACK TO WORK !!

I can not have them on the job, most are incapable of work, learning or paying attention, they quit after 2 days or get injured. I must do everything myself with 12 hour day's or bring in a older tradesmen and we get called a "Greedy WOPs with Cadillac's and Corvette's"

Then, after the unsustainable system failed in 1989, privatization started!

Gino you hit the nail on the head. Truer words were never spoken. These lazy fucks want to sit on the computer all night and sleep all day and want the poor working slobs to support them. Truly a lost generation.

Get this: Wile working on doorway restoration a 1920's house in Ridgewood. The mother of the kid who quit after 2 days had the audacity to come screaming at me about how is her son was going to make the payments on the truck she co-signed for. Ranting on and on "my son is a good kid how dare you'
I explained: He doesn't want to work, cant pay attention, cant put his phone away. I'm a licensed contractor with insurance and OSHA occupational safety regulations to contend with. I cant have him playing games, texting on a phone wile working because its my ass and my customers house on the line not yours!! Machinery, gas, electric, extension cords, solvents, razor knives, large irreplaceable etched glass and ladders here.

Her Response: "don't you have anything easy for him to do"
My Response: Nothing worth a crap is easy! I tried that lady. Your son said he was an artist right? How is it he couldn't paint gold leaf on the back of the glass straight with a stencil. Roman gothic gold leaf lettering is done from the back of the glass backwards. Instead of learning HOW the correct way your son argued with me to use stick on vinyl letters. Vinyl letters on a $3800 vintage restoration GIVE ME A BREAK LADY!! . Sorry even light work is not for him. Your son quit and I'm not hiring him back, good luck with him!

Gino you are a hero. Well done.