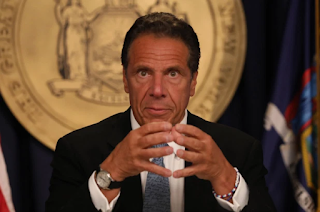 With cases surging in New York, Governor Andrew Cuomo announced this week that he was canceling all further in-person press conferences.

“Since the beginning, we’ve talked about the important role the media has played in educating the public about this pandemic,” said senior Cuomo advisor Rich Azzopardi in a statement. “But given the new stricter [Centers for Disease Control and Prevention] guidelines released Friday and the reality of rising cases in New York, going remote is now the most prudent action.”

While the press pool may be breathing a collective sigh of relief, workers across the state are still being compelled to head into offices, schools, and restaurants.

New York has continued to allow indoor dining as cases increased — though on Friday, Cuomo announced that he will be suspending indoor dining in New York City starting on Monday.

At the same time, the state has not been providing up-to-date information on the spread — instead, its maps tracking the coronavirus are often not updated or even showing decreases as the pandemic worsens. And as the virus surges, Cuomo suddenly changed the method for evaluating whether areas should be locked down — and the shift would allow more businesses to continue forcing employees back to their workplaces.

New York is experiencing a surge of COVID-19 cases similar to the wave it recorded in the spring when Cuomo’s late shutdown saw hospitals and morgues overwhelmed. Unsurprisingly, much of that surge is represented in New York City where less than 20 percent of hospital beds are vacant compared to 23 percent statewide.

Despite the surge, employers across the state have been calling workers back into offices, schools, and restaurants. Some remote-capable employees have also been compelled back. These workers face a difficult choice between their health and their financial security at a time when more than 19 million Americans are receiving unemployment aid.

Benito and the goal posts.

Variety is the Spice of Life said...

Hey JQ. What's with a-l-l this Cuomo posting? Why not rename Queens Crap - Cuomo Crap? You even posted the photo of him fishing from the boat 2x. It's Cuomo this, Cuomo that morning, noon, and night. There are other Queens-ORIENTED stories as well. (How about the duck removal yesterday from Bowne Park, etc.)

if you actually read the posts, Crappy has resurfaced and posted those Cuomo stories. Including the boat one, which I used again for the follow up to the Jamaica Bay story, which is in Queens. (Sometimes repetition can be useful to make a point)

The requiem post restaurant photos were taken in Queens. Prior to Cuomo's recent decision, all of the posts were about Queens.

Worried about ducks? Send crappy a link about this story and it'll get posted. Or you can start your own blog, guvner.

"Or you can start your own blog"
People/Readers come here for Local Queens News and have for years.
Some more stories on our do nothing local Representatives would be great JQ.
Meng, Suozzi, Brainstein, AOC Liu, Boloney .... They work for us !

Benito is OK with socialism, Marxism, communism as long as he is in charge.

To the duck guy - shame, not even ducks are safe from tyrants!

Don't worry, they'll get scrutinized. But as you can see right now, Big Daddy Andy is doing all the hell raising right now.

Moe said...
Obvious corruption everywhere with this Meatball Gov. The people see it, but I guess the justice is BLIND !