D.A. Katz is trying to convict a woman for fake gun running 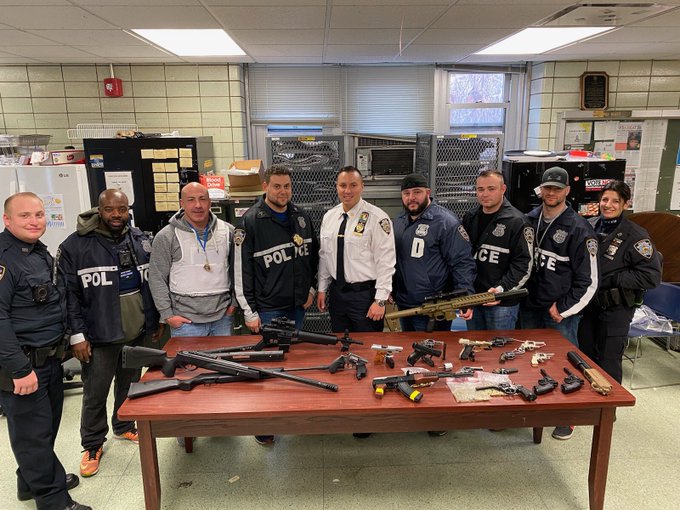 NYPD officers acting on a tip last December raided the home of Elizaveta Zlatkis and found a cache of guns scattered around her Forest Hills apartment. The next day, cops from the 112th Precinct arranged the 22 seized weapons on a table and posed for a Twitter photo commemorating the bust.

Queens prosecutors charged Zlatkis, 31, with first-degree criminal possession of a weapon — a charge that carries a possible 25-year prison sentence — and a few local news outlets covered the case.

There was just one problem with the narrative and the charges: 21 of the 22 supposed firearms were airsoft rifles, toy replicas or starter pistols — the kind used at track meets — incapable of firing ammunition, according to the NYPD’s own laboratory reports.

The one actual firearm was rendered “inoperable” because the trigger, hand grip and internal components were all missing, according to the NYPD’s firearms analysis.

But a year after her Dec. 27, 2019 arrest, Zlatkis is still facing the first-degree weapons charge, which is based on possession of ten or more firearms. Queens District Attorney Melinda Katz has declined to drop the case against Zlatkis, who has refused to take a plea deal.

The case has made her life hell, she said. A quick Google search of her uncommon name reveals why. The first six results are news articles about her arrest.

Friends from high school have posted those articles on Facebook and she decided to turn down an initial job offer after she learned about the company’s intensive background checks, Zlatkis said.

She and her husband Elvis Selimi loan the guns to rappers and producers to use in music videos, she said. Zltakis even appears in the background of at least one of the videos for a song by the artist Tay Spades.

“We do videos with them as props,” said Rosedale rapper Crucial, who has become friends with Zlatkis and Selimi. “I didn’t know you could actually get in trouble with all that. That’s wild. They’re fake.”

Surprised this happen in NYC ?
This is an actual communist attempt against the People of the United States.

I agree that charges should be dropped. That said, it is kind of hard to feel sympathy for someone renting even fake weapons that are likely used to glorify violence in this city.

The hell with this person and customers.

I live in a free Red State. Guns here are as common as communists in the Peoples Republic of NYC. The problem is not guns in your town, it's you.

You have no idea of the corruption that takes place, locking up the minorities for the prison industry.

BTW - I agree with you Rob.

That said, it is kind of hard to feel sympathy for someone renting even fake weapons that are likely used to glorify violence in this city.

Say that to Hollywood. Made billions on violence. More killings in 2 hour movies than in wars!

@Rob in Manhattan
You have no idea of the corruption that takes place, locking up the minorities for the prison industry.
BTW - I agree with you Rob.

I have a pretty good idea. I helped produce a radio documentary on the private prison industry in the early 1990's. Sadly, little has changed.

This moron renting out these guns to these thugs should be arrested for stupidity not for criminal possession of a weapon. If anything she should have been given a summons.

But what do expect from a DA without any type of prosecutorial experience. She let's the criminals that should be in jail out to wreak havoc on the our streets. Go after the real criminals that are killing and robbing people in the streets. That's what happens when you elect a political hack as DA.

I have no sympathy for this stupid woman and her husband but they should not be prosecuted for CPW any further. Maybe they've learned their lesson or not?

Congrats. A lot have changed. More minorities in prison under the disguise of "fighting racism".

Texan Gun Counselor said...
How many lives have been saved by Guns ?
Care to look it up ? It might open your minds !

This could be more Russian collusion.

Did the defendant waive her right to a speedy trial? Or was it delayed due to the pandemic?

Hope she continues to refuse to take a plea deal or ACD, and sues for malicious prosecution and wrongful arrest.

It’s not about left vs. right.
It’s about good vs. evil.