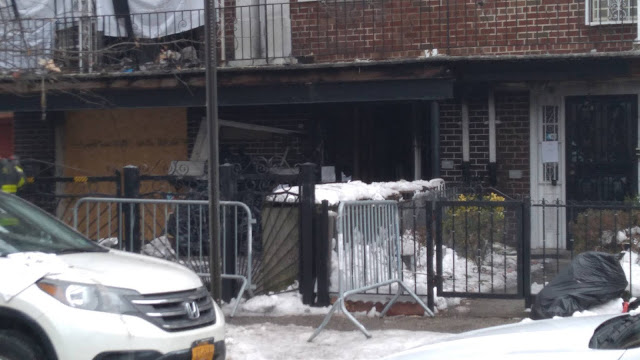 An FDNY dog found traces of accelerant on three gloves inside the car of a Queens landlord whose apartment house burned down in a suspicious fire that killed three people, police sources told The Post.

Cops and fire investigators were searching the home and Toyota 4Runner of Eric Chen in Flushing late Tuesday, when the canine made the discovery, the sources said.

Police seized the SUV, as well as digital recording equipment, a computer monitor and a hard drive, the sources said.

No arrests have been made in the case and no charges have been brought.

Chen, 29, purchased the home at 90-31 48th Ave. in February, and had since tried evict eight tenants who remained in the house.

Building department records show that as many as 60 people may have lived in the home at one point — one of 26 open violations at the three-family Elmhurst home.

Most of the violations occurred before Chen bought the property, records show.

If the glove smells like gas, you must convict his ass.

I hope we don't go back to the bad old days of the 70s when landlords esp in the south Bronx torched their buildings for insurance because they could not make enough on rent. This is the unintended consequence of rent strikes and eviction moratoriums.

This is what I think:
It will be worse because under Cuomo II, Bidon, deBlasio and the socialists landlords wont be seeing rent period!
Under socialism you will need to open your home to a section 8 agreement and the government will pay you what it deems that apartment is worth. The government will also select the tenants.
A landlord will have no say at all if they wish to get paid for tenants.
Don't say "Naa that's never going to happen" !!
Also kiss your IRAs trusts goodbye, this new impending government will get into that somehow, someway.
Tapping all the trusts combined with negative interest rates in exchange for universal income for all! AKA Redistribution of wealth.
I predict NASTY high negative interest rates will be the kick off to such redistribution.
Yes, buy dogfood with your $600 or eat your government canned fish on crackers like in parts of Russia & Ukraine.
Now there is talk of a $2500 surcharge to register private owned car's like in California and other assorted shitholes like Denmark, Brussles & Holland.
In Holland they even dictate what kind of car you can own !!!
May god help landlords and people who busted ass lifetimes to earn what they have.

NRA Ned needs to get out more often. Too many days holed up in a trailer with crates of cheap beer and a gun that don't shoot straight anymore isn't good for anybody. Time to get outside and get that rusty old pickup roadworthy again. Luckily you don't live in one of those European countries that don't allow cheap beer, pickups and guns that don't shoot straight anymore.
Lets see if you a real patriotic American?
1. Got a gun (even if you cant shoot straight ) - Check
2. Got a P/U truck that does less than 20 MPG - Check
3. Got a crate of cheap beer - Check
4. Got a trailer - Check
5. Eat lots of junk - Check
6. IQ less than 90 - Check
7. Love Israel - Check
8. Love Russia - Check
9. Love God (AKA Donald Trump) - Check
10. White - Check
11. Hate liberals - Check
12. Hate socialism (except for cop unions, construction unions, medicare, social security, the postal service, roads, fire department, government subsidies for the wealthy ) - Check
13. Hate labor laws that protect workers. - Check
14. Hate clean water, clean air, trees or anything green that's not cash. - Check
15. White - Check
16. Tomato Ketchup is a vegetable - Check
17. No passport - Check
18. Hate any curbs on corporate power, AKA regulations. - Check


Yes, I believe you are a real patriotic American. Well done. (Just to confirm, you are white aren't you ? Oh, OK, Good. Well done )

Hey jackass, where were you educated? Must be one of them top liberal shitholes like Seattle, NYU, Berkley California, University of Amsterdam?
Naa, Perhaps a 12 year HS education by repeating the 7th grade 5 times
Not even close, 18 and you only got five and one half right (I shoot straight).
2, 10, 11, 12, 15 and 17

PS: I brew & bottle my own beer and wine, and you will never catch me drinking green bottles or anything that ran down a Moose's leg. For the beer I use the same hops & recipe as the old Bushwick brewery's. And you shit for brains son'ofabithches will never see that recipe !

@BoredWithFascists said... Good one LOL...
@Ned said... Good come back !
Love the Free Speech here on QC but JQ is getting cranky and needs some time off I think.

The real question is why are so many Chinese immigrants landlords in NYC? Slumlords will try every trick in the book. For all we know he was farming out his drug business to the squatters and when they smoked or shot up the profits, he wanted them gone.

Ever notice how the illegal immigrant landlord is always the most abusive to tenants? Some one should have told him, this not China. You murder you go to prison. you go long time.

I wonder if this Chinese firebug got advice from NYS Assembly member Cathy Nolan's office on how to illegally evict tenants during an eviction moratorium. She loves the landlords and hates all tenants. For a full 36 years Cathy Nolan's been in business with landlords. The people who work in her office are routinely disrespectful and rude to constituents.

Maybe the landlord/arsonist got advice from another pal of the big pockets landlords who toils for Senator Gianaris - another one who can do nothing for tenants and working people but falls over himself to assist landlords. Thanks to people like Nolan and Gianaris landlords feel very free to harass and menace tenants so they don't have to go to court or honor any eviction moratoriums.

When did it happen that the people who work for our elected officials do absolutely nothing for tenants and working people? And while they're at it, they give out misinformation on purpose.

I hope this landlord does not collect on any property or fire insurance and that once he finishes up his prison term for three murders and wanton disregard for injuring the other tenants, that they deport him to Wuhan.

you fucking dumbasses want to blame socialism when capitalism is what creates the need for these piece of shit landlords in the first place. do some fucking reading. put your faith into unions and mutual aid organizations, not politicians who use our taxes to go golfing instead of fixing the infrastructure of our country.
the workers of the world will be waiting for you on the side that actually fights for the people. https://iww.org/

Um,my union donated against my will to every crooked politician in N.Y. and then my teamsters union stole my pension and was taken over the justice dept,lol.