A deluge of development is headed our way 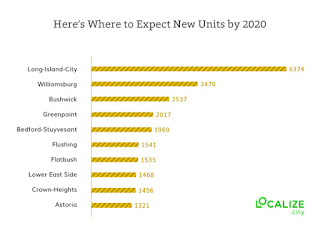 According to a report from Localize.city, a platform that provides neighborhood insights based on available New York City data, the city has already saw more than 12,800 new housing units open in the first half of 2018 and another 31,000 are expected to open by 2020 (h/t Wall Street Journal). In all, it is projected that New York will gain 90,000 new apartments between 2016 and 2020.

Per its findings, Localize.city reports that the bulk of these new housing units are being constructed in the outer boroughs—primarily in Brooklyn and Queens. In fact, nearly 60 percent of the new units are opening in neighborhoods Brooklyn or Queens. The only Manhattan neighborhood where a significant portion of these 31,000 new units are being added is the Lower East Side. For instance, Long Island City was ranked first among the top ten neighborhoods that are booming with new units, and by 2020, it’s expected to welcome nearly 6,400 new apartments, though Greenpoint is expected to see the biggest burst of new units by 2020. Williamsburg trailed behind Long Island City, slated to welcome 3,470 new units and Bushwick came in third place.

So what’s driving the residential boom? According to Localize, much of it has to do with the tremendous amount of permits filed by developers back in 2015, when there was a rush to get them in before the state’s 421-a tax abatement expired in January 2016. Many of the developments that are under construction now are the result of those permits and the number of new units under construction are starting to level off, though there is an uptick in the amount of units now hitting the market.

But what’s more important than merely the number of new housing that a particular neighborhood will receive is the implications it can have on the community. “New construction could mean different things in different neighborhoods,” says the report. While in the short term, residents may have to deal with the nuisances that come with construction projects (noise, dust, congestion), the long term effects could result in a shift in demographics, burdened transit systems, overcrowded schools, tension between newcomers and longtime residents, and a change in architectural style within a neighborhood.

These new units arent really helping anyone. First of all they have out of reach income requirements. And secondly, they wont stop more people from moving in. Those people who are already renting their illegally converted houses to people are not going to stop renting the illegal conversion when that tenant moves out. They will just bring someone new in to replace them. What needs to happen first is the DOB to do their jobs and stop illegal conversions and stop allowing too many people in one apartment. But of course the DOB will never do their job so our population will just keep increasing due to lack of enforcement.

And for this we can all thank the former fun size oligarch mayor and reborn democrat fauxgressive resister Mike Bloomberg who rubber stamped this tower pestilence, the inflated rise of area median income leading to rampart fabrication/speculation of rental market rates and exacerbation of homelessness from the gentrification it caused.

Mayor de Faustio is a corrupt prick, but all this hyperdevelopment was not his doing, he inherited it. But he did make a concerted effort to cover up this shit along with everything else from NYCHA to schools to transit and to the homeless. No wonder his attention drifted on his desire to become some kind of national figure for progressive politics.

Here's something I dredged up (no pun intended) about the criminal enterprise of sand plunder in India. Since we wouldn't have all this tower overdevelopment (and a dearth of affordable housing) without it.

Just MOVE out. There are far better places in the World than Queens. Stop Bitching.

Just MOVE out. Ok, let me go get my unicorn and take the rainbow path that will materialize. Hey Honduras sounds awesome I hear.

Making a transition is not easy, especially for the rent-burdened and living on lower incomes. It's currently hard for most people just to move to another town in the same borough.

"Move out"...the battle cry of every privileged snot rag transplant from Wisconsin, Kansas and Arkansas living here in NYC. Gotta love how privileged and narcissistic these little brats are. They have roots back home, so it's easy for them to yell at people to "move out" when times get tough, because they themselves can move back to whatever one horse town they came from. But where are the people who've been living here in NYC all their lives for 30, 40, 50 plus years, who have all their friends, family and a job they've been working 20+ years towards a pension supposed to "move to"? Is some 59 year old guy who's just three years away from retirement after working the same job since he was 24 supposed to just quit that job and the pension with it and "move out"--like the Anonymous Transplant Trolls always say?

How about this? How about Transplants MOVE OUT and leave the permanent residents of NYC alone, the ones who have their roots here? Not some shallow, narcissistic twit fresh in from the Midwest or Cali who doesn't understand that life for most people isn't a matter of just "moving out." How about that?

@Anonymous said...
"Just MOVE out. There are far better places in the World than Queens. Stop Bitching."
You sound like an idiot !


Get a better job.

Unemployment is 3%, starting salaries out of college start at $50k

>>JQ LLC said...
Making a transition is not easy, especially for the rent-burdened and living on lower incomes

That's if you get hired. And for middle aged workers laid off and elderly people that don't have golden parachutes , its still the hardest to do in the greatest country in the world.

Oh, as for those stats, don't believe the hype.

@Stranded NYer said...
Thank you ! I Could not have said it better.


Are you working and going to school at night to get a better job. Do you eat rice and bean, have no cable and save the rest? Collect cans?

Yeah, the hype that educated people make a lot more money. The hype that people that "make it" read a lot and get up early or string multiple jobs together and buy property.

You had every chance and you squandered it. Blame yourself not others.

What chances have I squandered, advice master? What blame do I have to assign to myself for being a hard worker and law-abiding citizen.

You know educated people are getting laid off too right? And they are having trouble paying their student debts (and I am talking about the ones who study to be doctors and lawyers too).

That's a lot of rice and bean.

Shout out to StrandedNY for the better comment and for that great pseudonym. Because that's what the majority of New Yorkers actually are. Well except for the advice master.

Electoral blockbusting, just in time for next redistricting

>Unemployment is 3%, starting salaries out of college start at $50k

Wow, you're like a real life advice boomer stereotype.