Cozy relationships may have brought shelter to College Point 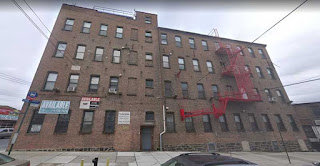 The Department of Homeless Services (DHS) spoke to Vallone Nov. 14 and notified him that they would be moving forward with the proposed shelter at 127-03 20th Ave.

According to the Vallone, the shelter could come as early as next September.

“Our fears were confirmed that 127-03 20th Avenue has been approved for use as a homeless shelter as early as September 2019,” Vallone said. “David Levitan’s greed sold out all of College Point for profit over the needs of our entire community.”

“This is a site that was deliberately purchased and converted for use as a homeless shelter — a despicable act by one owner who has no regard for the communities he infiltrates. We will continue to fight and stand with College Point,” he added.

Despicable act by one owner?

Yes, it was deliberately purchased and converted for use as a homeless shelter by David Levitan and Steven Berger. So who really sold out College Point since everyone knows what those two are all about? Why, it was none other than Gina Argento of Broadway Stages fame, a close friend of the mayor! Let's not forget that her husband, John Ciafone, has organized at least one fundraiser for Peter Vallone, and has been friends with the Vallone family for decades. Hmmm....

Also note that the sale of the property happened more than a year ago (just before the City Council election), but the transfer didn't happen until well after, in March.

Not to worry, we're sure Vallone and the born-again progressive, John Liu, will be right on top of this one. The voters of northeast Queens are to be applauded for their wise choices at the polls.
Posted by Queens Crapper at 6:18 AM

Then you read stuff like this which makes the local politician a hero.

They better put a stop to this. These men will be terrorizing the students in the area, the families that live there and the shoppers that shop in the Target mall.

We will ALL pay for this. The profits that these despicable thieves made on this building and will make housing the drugged up filthy bums will be taken out of the flesh of all decent people who live and shop in the area. People will be harassed by panhandlers entering or leaving stores in 20th Avenue Plaza, they will be robbed getting to or from their cars, cars will be broken into as shoppers leave purchases from one store in their car, on their way to another store. The stores will be stunk up by these bums seeking warm places and there will be a sharp uptick in shoplifting, raising prices for us all. It won't be safe to shop there any more, and that was one of my favorite places to shop because a lot of stores I like are all together there, with free parking.

Very good uncovering those ties that bind the parties involved, Crapster. This needs to be sent to every elected politician, to all pertinent CB's, asking firmly and directly about Ciafone/Argento's ties to Vallone. It's too bad most people don't have the wherewithal to post this information publicly on a billboard or something in plain view for all to see.

This better not happen

Ex cons and drug dealers coming to a neighborhood near you.

I think this is a great thing to have here in College Point. I mean this in a 100 percent serious manner, and as a life long resident living only a few blocks away. You want to know why? Because everyone in this community completely deserves it.

No one gives two shits anymore about College Point. There was a rally about this a few weeks back at the site, and only a few people showed up. A meeting a few months back at the Poppenhusen about homeless shelters filled the small room, but an issue like this should have filled the whole street.

No one attends civic meetings (except a few old timers) or pushes our useless council member to do anything here. There are already aggressive panhandlers in the area, the roads are horrendous, and quality of life keeps going down. No one votes, and the few that do just reelect the same morons back into office. The last guy that gave half a shit State Senator Avella is now out of office for the "great" John Liu, and we elected a socialist idiot who is the laughingstock of the whole country to represent us in congress.

So yes this is what the residents of College Point have demanded in our community.

If anyone complains about this from now on I will remind them that we as a community have voted (or not even bothered to vote) overwhelmingly for this and we should be proud that we are getting what we demanded. Maybe we can even get one of those safe injection sites the mayor has wanted to open up. We want to be welcoming and supportive of everyone, except the taxpaying middle class. Its the progressive way!

And let this be a lesson to the last few decent ares of the city left, if you treat election day like its a joke, elect and re elect morons to office blindly, just because they are members of a certain political party, you too will get what you deserve.

tooooo late vallone has already been greased - he has been from day one - and he is loving it for sure - idiot and fool that he is.

What did Senator Avella do about this? Did he know about it?

That is the old Kleinart rubber factory. Like that gaudy mess that Vallone Sr' buddy did out of the Steinway factory, these buildings should be re-purposed as art centers where artists live and work. Attract creative hipsters that could reinvigorate those areas.

Sorry, QCA, who really wants to practice art in Jamaica.

I don't know know about politics and I even know vallone is a shthole. Just take a look at how a once perfect and great Bayside High and Cardozo and Forest Hill High School was once fill with top students with at least 7/9 school ratings end up to be 3/9 because of those bad jamaicia kids who doesn't have a high school because Vallone influenced them to come here. Yes, it's Vallone doing no matter what he said. Wake up.

Same with this college point sht. I don't even need queens crap to point this out and I know he is acting to be a good cop when it's him who know about this all alone.

If he has that power, then he would've stop it unless he knows about it and careless. If he can't stop it, then he doesn't have the power and therefore should NOT be a councilman. A weakazz politician.

So wake up people. I would stop voting for him and vote for Senator Avella. The problem is that AVella does not have the monetary support that vallone has and as you know money talks.

Hey pal, Avella was the senator when they were planning for this and is in office till the end of the year. Not a peep from him on this. Seems like they snuck one by him when he was busy pandering for asian votes on the specialized HS issue. This was a big f-up for a pol who claimed to be a champion on quality of life issues.

Valoon is a Democrat! What else is new? He sounds exactly like the guy who just went under. What's his name? Oh Yeah! Tony Avella! Their all cut from the same cloth. Enjoy Liberalism New York.

Why are Demoncrat bashers so poor at spelling and grammar?

Liberal policies taking effect. Who did you vote for? Or did you not vote at all?

Have a look in the mirror. You might not be justified in complaining about this.

Everyone on the College Point FB page acts like great people and then complain when the same idiots they voted for put a homeless shelter in their neighborhood. You can thank the Democrats for that. Open your eyes you are all pieces of shit you aren't good people. Same people complaining about this are the same ones criticizing Trump for the wall to keep the same kind of people out of our country. Fuck outta here, the shelter is staying sorry to say guys but you shouldn't have voted for that moron to be our mayor just because he runs as a Democrat doesnt mean you had to vote for him. That's the problem IDIOTS. Good thing I sold my house in CP before the property values plummet

30 years and i cant take it anymore, I went to many meetings. had cars towed from blocking my driveway more then i can remember. its been a construction site for 10 years 11th ave ripped up fo 3 years 20 mins on 14th ave just to get to the expwy made me snap. now a homeless shelter. been on long island 3 yrs now but i kept my house hoping to maybe go back but that aint happening. cant beleive how much i like it here.

I’m glad not even John Lui has no power over the bought by Steve and David from the city nobody has the right to tell you who to open or not! Americans come first before illegals immigrants who are living off SSI &WELFARE every single Chinese/Koreans Muslims and Latinos living free medical free food and rent! They have no rights!