Plaxall to develop site alongside Amazon 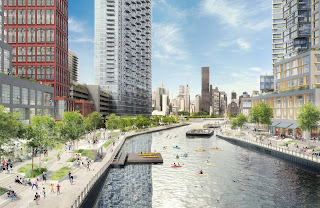 The family-run plastics company, which last year developed a 15-acre plan that appears to have been the key to luring Amazon’s HQ2 to New York, will retain a site just to the south of the tech company’s planned campus where it can develop its own commercial building, according to a memorandum of understanding between the company and the state and city’s respective economic development arms.

Plaxall... will retain the southernmost block of the larger project: a group of properties that sit on the block between 46th Road and 46th Avenue. The six property lots, which cover nearly the entire block, would allow Plaxall to build a mixed-use building slightly larger than 800,000 square feet, or a residential building of nearly 566,000 square feet.

Under the residential plan, the new building would be subject to the city’s Mandatory Inclusionary Housing requirements, and under either scenario, Plaxall would set aside 5 percent of the space for light industrial use.
Posted by Queens Crapper at 12:31 AM

Again, how does this Mayor & Governor and this city consider themselves "liberal" and "progressives", when there actions show otherwise and the whole Amazon thing is the biggest to prove how neither deBlasio, Cuomo and this city is really liberal or progressive.

They played right into the hands of the awful Jeff Bezos & Amazon. Jeff & Company, could have done the RIGHT THING and put their company in places that needed it the most, especially Trump's constituency (the blue collar, low-paying workers in the middle of the country, many who are hurting). They could have put it in Detroit to help that ailing city, in Oklahoma, Mississippi, etc. BUT no, what did the dirty company do, the pit all these cities/states against each other to try to win the crown jewel, while these places spent millions and millions of dollars into their "pick me" contest, money which was taken away from those cities/states that could have been used for better purposes. AND in the meantime, Amazon knowing full way, they they would start a bidding war and a place like NYC, would jack up their price, even though NYC does not need Amazon here at all. AND if you want to look at a template at how these tech companies can destroy a city and bring NOTHING to the table, look at San Fran and Seattle.

AND what is amazing that so many of our elected Dem officials did not call this bidding war out on what is was as well as the so-called liberal progressive New Yorkers, who brag how liberal and progressive they are, but see nothing wrong with one of the most despicable moves by an organization in the last several decades.

Same with the AWFUL Facebook, that new that Russians were using the platform and did nothing about it. AND yet, people still use the platform that for the most part serves no real purpose except for people to post their boring seconds of their lives for everyone to see "like having a birthday part on the subway" or your cat doing a cat thing or your baby doing a baby thing.

$25,000 jobs that may be created over ten years or may no bringing 25,000 more people to a crowded city is not the big issue or the failing infrastructure, which NYC has to own, BUT the dirty underhanded way Amazon did this as opposed to doing the right thing and saying, we will put this in Tulsa OK or Detroit, MI or even Baltimore, MD, and help the people, economy and communities there that need it. OR hell, if you are going to put it in NYC, put it in Jamaica to take over all that space by the poisonous Royal Waste Dump and all those shady auto repair shops.

Bottom line, NYC did not need this and many other places did and Amazon play these cities/states like a three card monte dealer, fucking everyone in the process while taking home the big money.

@ Joe Moretti said... There will be more to this story. Commissioner Mark Peters was fired by Mayor Dum-Dum deBlasio. I wonder why ?

Looks like Plaxall wanted a piece of the corporate welfare action.

#NYGovernorAndrewAmazon and Mayor de Faustio faces should be red or in the case orange with embarrassment. Never have I seen two officials bend over and get prison raped by a corporation and love it so brazenly.

The hilarious part of that 25,000 job promise is that all of them will average 150 k. But that is only possible if Jeff Bezos himself is counted.

And not only did Bezos made literal slobbering fools of state elected officials across the nation but they did it to acquire data about those prospective cities infrastructure and government policy processes. It's like something out of Oceans Eleven. Or that mini-series V.

I agree the back door deals and money Amazon got is ridiculous but the company was never going to move to one of those cities .

Tech companies have a hard time getting talent to want to live in those cities . Epic in Wisconsin hires almost exclusively from the local colleges because no one will move there .


>>Tulsa OK or Detroit, MI or even Baltimore, >>MD, and help the people, economy and communities

Hey Joe,
Selling and moving out. Escape from NY.

I'm so thrilled that Amazon is moving to LIC! We moved to LIC 12 years ago from Manhattan, and we love this place. Amazon will make it even better by moving their world-class NY headquarters here. Thanks Cuomo, de Blasio, Kathy Nolan!!!!

de Faustio was going to fire Peters a long time ago. Even sent his fauxgressive minion city lawyers to ease up on the investigations into NYCHA.

Mayor Big Slow (on snow ba dump bump) also took advantage of a report where Peters went off on a colleague and made a misjudgement moving his administration office to a nicer building. Which is of course ironic considering de Faustio's grubbing of tax dollars to pay his white shoe law firm.

Damn right Bezos wasn't going to Wisconsin or Jersey. The bidding/bribing auction was a deliberate scam. Re: in these times link again.

Once again the city council did nothing to stop this - and the disguising thing is how they show up as progressives fighting for the people.

All they will do is have the people trust them, then deliver them like so much cattle to the slaughter house. It gags me to see buffoons like Gianaris and Costa out there "fighting" for people. Fighting my arse.

I have no problem with Amazon. They only took advantage of what your 'good guy' gave them'