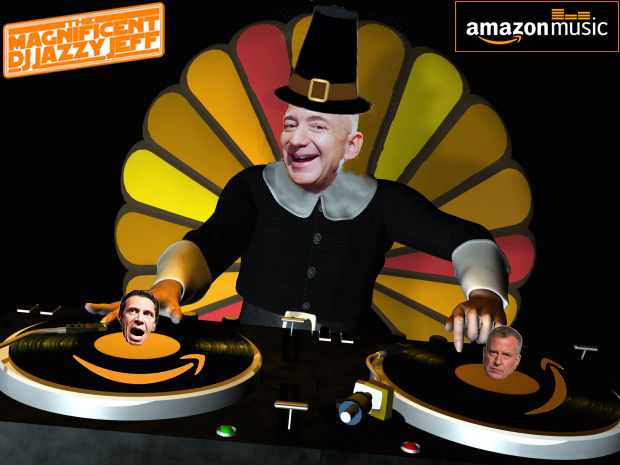 It's the day of the year when we give thanks for all we have. And no one has more than this guy. And he's about to get even more at our expense thanks to two other guys who he spun like records. I guess we should be thankful, though!
Posted by Queens Crapper at 12:12 AM

Thanksgiving is a typically American holiday. In spite of its religious form (giving thanks to God for a good harvest), its essential, secular meaning is a celebration of successful production. It is a producers’ holiday. The lavish meal is a symbol of the fact that abundant consumption is the result and reward of production. Abundance is (or was and ought to be) America’s pride—just as it is the pride of American parents that their children need never know starvation. “Cashing in on Hunger,” The Ayn Rand Letter, III, 23, 1

That is some funny photoshopping crappy. Happy Thanksgiving for the rest of us not getting oligarch welfare subsidies and dealing with rent burdens, purposely neglected public housing, broken and bike lane ruined roads, the worst fucking transit system in the universe, high ass commercial and housing taxes, an imbecilic speculation property value market, and all the rest of that shit.

Today is also the 50th anniversary of the Beatles White Album.

Happy Thanksgiving to all on Queens Crap !
#happythanksgiving
#lifeisgood
The Hashtagger...

JQ LLC: . . . and the 55th anniversary of JFK's assassination. 55 years later and folks are still discussing whether Oswald was the lone gunman.

The deal to bring Amazon to LIC has replaced Amazon Prime with Amazon Crime.

Happy Crappy NYC Thanksgiving Day to all, including the Harry Hallers, the Princess Dianas, the Zoes and all the rest of the crapper brigade, who despite the many differences, I always learn something new, sometime something wrong and sometime something correct, but I learn.

Thanksgiving, a time to reflect on thanks (which NYC seems to have a small supply of) and after reading an op-ed by Queens Lady of Crap, Melinda Katz, no one should reflect as much as hacks like Katz and the all the Queens & NYC/NY elected officials who continue to serve not as "public servants" for the betterment of their communities and constituents, but the real estate developers, the mega rich, the greedy corporations and have made from nothing to little in the way of bettering the communities they serve, but more in the vein of destroying neighborhoods by neighborhoods with their spinless backs/no balls/ovaries to stand up and do the right proper thing instead of their piss poor decisions or no decisions at all and NOT standing up to the biggest Turkey, DeBlasio. And to all those elected officials who love to pit all of us lowly folks trying to just get by against each other as opposed to putting COMMUNITY & COUNTRY FIRST, NOT POLITICS or PARTY AFFILIATION or the almighty dollar.

Happy Turkey Day, because these hacks have played the tax payers as turkeys on the chopping block.

Happy Thanksgiving to the Crapper Community. And remember if you sit down to eat with family and friends, for just ONE DAY, do not discuss politics, you have a million other interesting, inane subject and utter other bullshit to talk about.

Lets for at least one day enjoy and forget all the craps given to us by Dumbasio and his pals.

Yeah, this guy too.

and this guy did also

And thanks most to Queens Crap, for giving me an outlet to rage my disgusts and discontent, leading to me starting my own blog Impunity City...

Can't wait for them to come. You all use them,don't lie.

an op-ed by Queens Lady of Crap, Melinda Katz

Shouldn't that be Melinda Craps?

Happy Thanksgiving to all my fellow New Yorkers here,

no matter their worldviews, political leanings, gender fluidity status, favorite neighborhood, favorite music style (Ramones Rule!), favorite high school, favorite food or favorite dog breed,
I think we can all agree that there's much to be thankful for!

p.s. The White Album is definitely a favorite:

Dear Prudence, open up your eyes
Dear Prudence, see the sunny skies
The wind is low, the birds will sing
That you are part of everything