Ridgewood monument should get more respect 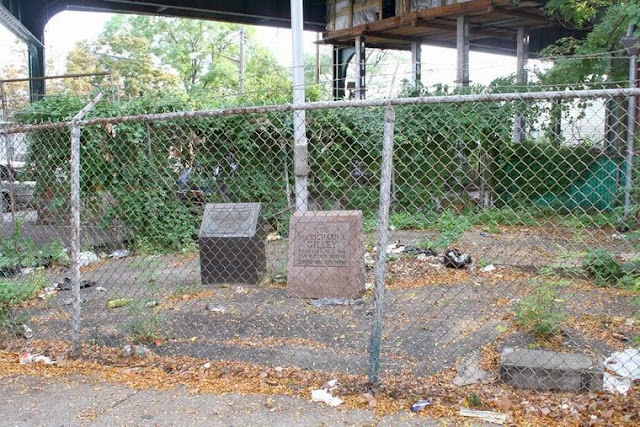 On Jan. 31, 1968, Private First Class Richard Gilley, of Maspeth, was killed in action on a Vietnam battlefield three weeks shy of his 21st birthday.

Almost 50 years after his death, a memorial dedicated in his name sits unkempt and dirty next to the former American Legion post at 776 Fairview Ave., underneath the Forest Avenue station along the M train line, in Ridgewood.

Multiple homeless people live alongside the chainlink fence in front of the memorial and bottles, plastic bags and old food containers litter the area surrounding Gilley’s plaque and rusting flagpole.

The property the shrine sits on belongs to the Greater Ridgewood Youth Council, which plans on moving into the adjacent building it purchased in 2009, but hasn’t yet due to financial reasons.
Until 2004, the building belonged to American Legion Post No. 562, which dedicated the memorial in 1972.

GRYC Director Bob Monahan said his organization deserves some of the blame for not maintaining the memorial properly, but that beautification work should start in the near future.

“I would imagine over the next week or so that we’ll get rid of the weeds. We’ll do the best we can to clean it up,” Monahan said. “That whole corner is being replaced and it’s going to be a beautiful little area. It will be quite stunning.”

According to Monahan, the GRYC has attempted to clean the area before, which also includes a general plaque for all soldiers killed in Vietnam, but the presence of homeless people living next to the monuments precludes the space from staying clean for very long.

In 1972, this may have been an ok spot to place the monument. But this is 2014 and just the fact that there is a train station above this spot that hosts a number of daily slobs who throw stuff down onto the tracks is reason enough to move it out of there.
Posted by Queens Crapper at 12:46 AM

This is really no different that the majority of Queens and most of NYC. The conditions of this so-called "greatest city in the world" with such a high cost of living is appalling. We pretty much our paying half our paychecks to live in some third world country, is what is amounts to. Very few big cities in the USA look anything like the garbage dump that is NYC.

Wasn't this erected by the Joseph Garity Post of the American Legion?

Yes, but they left it behind. Perhaps they made a deal with Wyckoff Hospital that they would take care of it when they sold it to them in 2004.

Why not transfer this parcel to the Parks Department and make it permanently green?