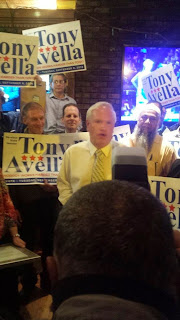 The results are in, and Queens voters have 86'd Malcolm Smith and re-elected Tony Avella. Incumbency ruled the rest.

Queens Dem voters in SD11 don't really care about party loyalty so much as they care about being represented honorably.

Thus far John Liu has refused to concede even though it's mathematically impossible for him to win, which speaks volumes about his character.
Posted by Queens Crapper at 12:07 AM

Really? Then how did Vallone get elected?

Liu will ask for a recount as per Melinda's advice.

Joe Crowley pulled out all the stops to dump Avella and failed miserably. A Hispanic should run against him next congressional election and take him out.

A well-deserved rebuke of Joe Crowley and his meddling. And a comeuppance for Liu's campaign manager, Chuck Apelian.

The next time you look in the mirror, Joe Crowley, say to yourself "I really am a total useless piece of shit."

As I've said in the past, you are now here exclusively to amuse me.

While you did so this evening, you still get no dinner.

I though that 8's were lucky for Communists.

Suck on that, Crowley and Co.


Yes, it's about half of State Senate District 11.

Interestingly, I was passing by Vallone's house at about 9:15am Primary Day, only to see that the John Liu lawn sign that he proudly displayed for months was mysteriously gone, right at the moment that he went to go vote at P.S. 32.

I guess Vallone got the memo before everyone else. My guess is that the amount of ongoing criticism that Vallone has received for backing an out and out criminal is making him a little sensitive.

The Avella Victory is key...it could signal the beginning of the end of Joe Crowley and machine politics....They did not do well in last year's city races...they did not back a winning candidate for mayor or public advocate, and now this.

Stick a chopstick in him. He's DONE!!!

John Liu needs to quit. Even his own fellow Asians are rejecting him. It's time to throw in the towel johnny!

Hooray for the people! Hooray for the community! Now watch out all you electeds who stood by Lou you are the real traitors. I know who u are!!!

Now, if only we can get rid of the Democratic representatives that supported Liu. These guys proved that they don’t care about our communities. Avella was the right choice and they knew it.
This primary proved that there is still hope and all is not lost.

People refused the corruption.
Corruption is uncurable disease for every nation.
Our job is minimize it.
Next is liu followers.
God bless Avella.

This ain't over yet.

"Virginny" Joe Crowley is running up long distance phone bills from his home base, several hundred miles away in in the state of Virginia, trying to fix, steal and buy the voting results.

I guess the voters weren't as dumb as you thought they were, huh, Crappy?

The fact that there's only 500 votes separating Liu and Avella instead of 5000 proves how dumb the voters are in that district.

Smart voters in District 11 said no to John Liu and yes to Senator Tony Avella, but over in District 14 (where they don’t have the sharpest tools in the shed), although the people said no to Malcolm, they got brain freeze halfway through the voting process and said yes to the same old shit entrenched Leroy Comrie. This district really does not vote with their entire brain. Same old shit, same old problems.

Remember that District 14, when you area is just as bad four years from now as it was a year ago, when you elected Comrie for city council for twelve straight years and your district did not get any better, but actually got worse. Sure no one knew who Munir Avery turned out, but we all know how Comrie actually is and has never really gotten major results with all his time in various offices.

Unless something drastic happens in the generals come November, this is going to be Comrie Land. GOOD GRIEF. Jamaica loves mediocrity and loves staying at the bottom of the gene pool in Queens.

At least in my District we kept Tony.

Thank God(!) that Tony beat that criminal, John Liu! All these asshole union members were in front of my polling place shouting “VOTE FOR JOHN LIU”!

Their unions sent them! I spoke to a few - they didn't know nothin' but what they had been told to think! So now your workplace is allowed to dictate how you vote?

Wow - it's most definitely a new Gilded Age with new Robber Barons!

I think it’s time to slap these unions down – they don’t give a shit about NYC – just their bloated salaries and pensions!

How could anyone in their right mind chose Liu over Avella? And they were spreading lies about Tony – dirty politics at its finest.

These union people are morons – just point them in a direction. give them a script and they’ll believe anything!

Why bother reading and coming to an informed decision when it's so much easier to let your UNION VOTE FOR YOU!!!

Has anyone read Adam Lombardi's blog lately? It's hard to believe that this guy actually found employment in journalism.

The journalism gig was short-lived (I believe 3 weeks). He now works for an LGBT group on Long Island.

Another crook out of Bronx Science. What a surprise. At least it's not another cannibal out of Stuyvesant?

Okay Avella won and I supported him.

Now who is his November republican opponent so I can vote Tony out and get a conservative into the state senate?

Where are the Mike Abel's when we need them?

We can thanks the late Phil Ragusa for that act of incompetence.

Of course, add them my bad, add all the black ones, sorry, but they are all corrupt, better put Comrie down, also Peralta, Grodenchick,

I would rather read the wrapper on my roll of toilet paper.

Remember when Lombardi was an anti Stavisky crusader? Now he's shilling for her and knocking her opponents. Another County stooge.

Can you say that again in English?

Will there be an investigation of John Liu's campaign contributions and contributors? Probably not but it should happen.

Anonymous said...
Remember when Lombardi was an anti Stavisky crusader? Now he's shilling for her and knocking her opponents. Another County stooge.


Ahh but the little boy needs the big county people to protect him. I caught him yesterday listening to the "How to Deepen Your Voice" series

Sorry to say, but I don't think John Liu is capable of disappearing - he just loves the "limelight" of politics - so for him, any publicity is good publicity. Unless he is indicted someday, he will keep turning up. I would imagine he would jump at the chance to run for Congress if Grace Meng decided to give it up to devote more time to her family.

At 3:00 PM today there still isn't a complete vote count in the Avella vs. Liu primary. Only 95% of the vote is in according to published reports.

I understand that there may still be 5% of the vote to count but Liu would need 93% of the remaining 652 votes.

That is going to set off alarm bells in every DA's office in the nation and Tony is not going to stand by and watch that nonsense happen.

NOBODY gets 93% of the last 5% of the votes in any election anywhere in the US, never have, never will.

It's over and the fact that John-son-of-a-convicted-bank-thief-Liu doesn't concede the race is just because the way his parents raised him.

He is a bad person.
Always was.
Always will be.

The missing votes are in AD26, an Avella stronghold:

I was looking at the other districts after seeing Anon No. 46's post. Every race has a district of two with uncounted numbers, including the Comrie/Smith election. In other words, nothing out of the ordinary, nothing being held back (could be wrong, but I hope not) and Liu is gone.

Add Councilmember Mark Webrin to the list of Democrats who supported Liu.

Here's a greeting on your loss from a "grumpy" man...as you once greeted me...Johnny. Do the math Mr. Liu.. There is no way in heaven or hell that a recount can give you a victory. As a financial actuary, you should know this. Now, settle up your fines and assume the position as a
loser...or Liu-ser...as that astute poster stated.

Now let us be rid of Liu's partner, Chuck Apelian.
Time to dump Kelty and Bitterman too.
Clean up CB 7if you want a cleaner Flushing.

Dont make too much on Tony's victory.

Anonymous said...
Dont make too much on Tony's victory.

It will change if we change it...Crowley and his Queens Democratic Organization goons and robots have serious egg on their faces...it's time to take them out, it may take a few years, but they are not as strong as their legend implies

Anon No. 52: Avella won despite all of the stuff that Crowley and his gang was hurling at him. It's a significant win. Don't minimize it.