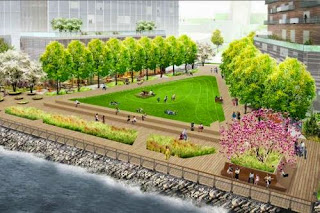 Earlier this week, the Durst Organization bought the long-awaited development site at Hallets Point, paying "well over $100 million" for a 90 percent stake in the Astoria megaproject.

The Hallets Point development has been in the works for years, and developer Lincoln Equities finally got the greenlight from the city last fall. All told, the project will have 1,921 apartments (plus 483 affordable units), spread across seven buildings. The plans also call for an esplanade, a school and retail space, including a supermarket. Interestingly, the New York City Housing Authority struck a deal that will allow the developer to build and operate two affordable buildings on the grounds of Astoria Houses, the nearby public housing complex.

So the affordable housing will be on the grounds of the projects and the council went for this?? ROFLMAO!!!
Posted by Queens Crapper at 12:19 AM

So more than half of the peninsula being almost free living projects isn't enough?? The affordable units should be given the premium views too? Gonna be hard enough to sell the project with its long commute to the train, the collateral crime that comes with living next door to the pj's, and nothing close by in the way of restaurants and nightlife. Any investment there is almost a gift to the area. Just my two cents

from curbed on council approval of the project said there are eleven buildings, 2644 dwelling units, four affordable buildings on the public housing super block totaling 340 affordable units, one market rate building there too with 240 market units. 143 affordable units not on nycha land too. Did something change?

Do we know what Vallone voted? He is such a liar and double talker. Even his staff is being trained in art of double talking.

Durst has been one of Melinda Katz biggest supporters and contributors to her election campaigns. Now you know the rest of the story...

Don't you love the pictures of these projects, the buildings a shadowy grey with only the lower 2 stories of a 40 story building depicted (how many to be built - 8 or 9?), with lots of green focusing on the postage stamp park, and tons of smiling white people, well-dressed white people, and no one on the community board or press asking for something that even faintly resembles reality.

they will put a half dozen people in each two bedroom apartment and charge premium rents.

just like they did in Harlem a 100 years ago. that is how they make slums.

the rich get a tax break and us taxpayers get long term poor and infrastructure costs out to the horizon.

views my ass. let the developers live there - and take the politicians and that community board with them.

No problem if we shoe horn everyone in. When you have an open door, there will always be desperate people for which this would be a step up.

Read the article - that is the future of Halletts/Astoria Coves.

Thank community board one and the Astoria politicians for this one folks.

The illustration looks like they are developing a park, not a housing project. Very sleazy misleading artwork.

More apartments to house more lowlifes...great just what we need!