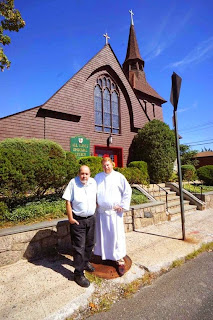 Members of All Saints Episcopal Church in Bayside have been waiting two years for the city to repair their damaged curbs, but Department of Transportation officials say if they’re unhappy to sue the city.

It all started about two years ago, according to member and community activist Jack Oshier, during the winter when Department of Sanitation trucks plowing snow got too close to the curbs and damaged them.

There is no parking around the church, located at 214-35 40 Ave., allowing the plows closer access to the curbs than usual. Oshier said further damage was inflicted last winter.

He has reached out to city agencies and elected officials with little success. “We finallly sent a letter to the city comptroller putting in a claim but that could take years,” Oshier said.

Assemblyman Ed Braunstein (D-Bayside), who used to live across the street from the church, also got involved and was last told by the DOT that the curbs would be repaired, but the agency was unable to say how long that would take.

A spokesman for the DOT told the Chronicle there is no outstanding Notice of Violation or sidewalk conditions at the property, although the agency did receive notification of this condition, which cited snow plow-related damage to the curb.
Posted by Queens Crapper at 12:17 AM

Good luck getting curbs fixed in Queens. My curbs were paved over when the street was resurfaced by private contractors hired by the city. Once beautiful Belgium blocks covered up now and the rain water is washing away the grass and soil. Also drivers have no boundaries and park there tires on the curbside lawn.

Yes, I agree it takes a long time for a curb repair. I asked for my curb to be inspected/repaired in 2007. I was told that if they looked at they would have to look at my sidewalk, which sounded like a threat. They did inspect, found the curb needed to be replaced, and found problems with the sidewalk, always where a city tree was, and some of that minor, a slight crack, or the sidewalk raised up half an inch.
They still haven't touched the curb, something about when they will get to my neighborhood, but I only had 40 days to fix my sidewalk. And then, less than 2 years after my sidewalk was replaced, they cited my for a sidewalk violation for a it being raised a quarter of an inch, again next to a city tree.

This seems to be a city budget issue and is ranked as a low priority.

Interesting when I read of this stuff I think of Queens Plaza which has plantings a l l l l the way down to 21st Street as an effort to attract development and investors.

You know where this is going. Like most problems with the city go after your councilman tooth and nail.

It will get fixed.

Well, you know what they say- no good deed goes unpunished.

holding the city responsible for what it is supposed to do, is not whining.

i too have been waiting over 2 years for DOT to fix a curb that's been busted. I filed with the councilman at the time. they came out inspected the curb and THEN GAVE ME A @#*$ VIOLATION on my sidewalk. So I fixed that; $2k later. But Im still waiting on the curb. I also filed with 311 and have the email records. What a bunch of bullshit!

then write some letters to the press, and if they refuse, let crappy know.

i am tired of a bunch of third stringers that are ruining this boro are always portrayed as heroes in the local press.

its about time we start to paint them to the public for what they really are.

believe me you start doing that and the curb will be fixed faster than you can say 'photo op!'

All Saints has a member of their congregation who helps out part-time as their sexton in addition to his "real" job. As Crappy and others have pointed out, it's the City's responsibility to fix it. The church should inundate Paulie Conehead's office with calls and emails.

Yeah,pound on Stinky! That's the ticket!

"I guess it's simpler to whine on Queens Crap" — no one from the church whined on Queens Crap. They spoke to the Chronicle and Crapper posted a portion of the article.

"then write some letters to the press...portrayed as heroes in the local press" — you're commenting on an article by the local press that pointed out a failure of the city to do its job. It kinda seems that if you contact the Chronicle (maybe by email or phone, though I guess a letter would work too) about a city problem, you just might get it covered.

after many years of requests from local pols ,the dept. trans. and streets still will not repair the curbs and sink hole at 42 ave.204 street in auburndale/bayside.

Maybe they'll just put a speed bump sign up here too and then when people start getting hit, no need to call the ambulance. We all become speed bumps. Then we won't count as casualties and Vision Zero is preserved. Who says government isn't efficient?