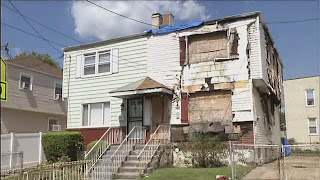 Almost two years ago, a fire burned out a house in East Elmhurst, and neighbors say the scorched structure has sat there mostly untouched ever since.

"Little by little, we got different agencies to come in, but no one could seem to give us the answer: when are they going to correct it, demolish it or possibly rebuild it?" says resident Jerii Durant.

Residents say the house is not just an eyesore but also a potential hazard to the neighborhood.

"There's rodents coming in and out of the house," Durant says. "The house is liable to collapse, and I'm sure there's mold inside."

"I'm afraid some pieces may fall off, which it has in the past fell on my car. I mean, we could be walking and a piece could fall on us, you know?" said neighbor Marion Moore.

Neighbors say the owners of the abandoned house died years ago, and after the fire, the house became a huge burden to the neighborhood, acting as a breading ground for rodents and a home to squatters.

Yikes. Imagine living in the house attached to that.
Posted by Queens Crapper at 12:02 AM

I think it's rather quaint looking. And you don't have to worry about noisy neighbors.