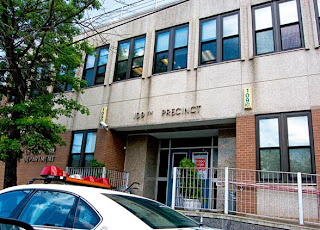 A 51-year-old man shot his girlfriend in downtown Flushing Monday afternoon before turning the gun on himself, police said.

Xie Bin, of Flushing, shot Ya Ling Meng, 46, in the head and then killed himself in front of a Chinese restaurant on 41st Avenue, near bustling Main Street in broad daylight, according to the NYPD.

Responding authorities arrived at the scene just after 5:30 p.m. and found the two lying on the sidewalk, police said.

The burned bodies of three unidentified people were found with their throats slashed after a fire at a Flushing apartment building early Tuesday morning, police said.

Authorities responded to a fire in the Roosevelt Avenue building at around 4:50 a.m. and found the three bodies with severe burns in the living room of an apartment, according to the NYPD.
Posted by Queens Crapper at 11:34 AM

One way of eliminating the immigration problem.

Need it be said? Vibrant and Diverse!

Asians committing a crime? No, it can't be!

Life is not easy to live in a foreign country. RIP.

"Forget it, Jake. It's Chinatown."

Human and drug trafficking in Flushing. There is a connection.

How does this compare with murders in other parts of NYC?

First off, the triple murder, that the Daily News reports was a "suicide" is total horse shit. If the police from the 109 really believe that, then they are being paid off by some asian mob. This was made to look like a suicide! This man would not of killed his son, who went to Brooklyn Tech, and longtime wife, he would of just killed himself. He probably owed the WRONG people money and they wiped out his family. Why would this man SLIT the throat of his wife and SLIT his son's throat and then try to slit his wrists. FISHY. The most ALARMING fact pattern is the TORCHING OF THE BODIES THEN stacking the bodies up, how does one stack himself up after he has expired and then light himself and family on fire after cutting their own wrist....

Then there is the horrific suicide murder that happened in broad day light. A crime of passion yes but what fueled it? That block is NOTORIOUS for "massage parlors". The man was in his 50s and the girl was in her 20s, boyfriend and girlfriend.... the block being what it is..
Queens Crap is a good site but might I suggest you start investigating these 'spas" and "massage parlors" that have infested not only Flushing, but Corona, Bayside and the whole of Queens. Right across from Broadway LIRR station is a SHADY massage pallor, and then there is OB's Cavern....
further down the block is the Barbershop with the black tinted windows THAT NOBODY enters! what kind of barber shop has BLACK TINTED windows. Then there is that suspect Karaoke ROOM/BAR, which is just, a RENTED room by the HOUR.

The police are very corrupt here and turn a blind eye to a lot of the human trafficking, prostitution,gambling,extortion, and now homicides.

oh btw that block I mentioned there was a place called the rodeo that was shut down because it was a gambling hall but I can remember seeing police cars in front of the place, probably picking up their pay offs, I guess the operators stopped paying and got shut down. Now its a medical facility.

The new Chinese immigrant is extremely hard working, whether legit or not. With those very long hours comes a whole lot of stress.

Whether it's owing money or not having enough, things come to a boiling point.

Regarding the 3 people and the fire, someone made it look that way.

The cops arent corrupt,theyRe undermanned and ruled by 911/331 calls...........detectives routinely carry 10- 15 cases. It's not nypd blue where the whole squqd handles a case and moves to the next,that's tv.

Anonymous #9: there are corrupt cops and many are in Flushing.

I'm not saying all cops in Flushing are corrupt, just 80% of them.

That's 5 murders in one week in the 109 precinct . Hope it doesn't get worse.

I thought that Flushing was a safe place. LOL! We may not have drive by shootings but we can expect to hear shots ringing out in broad daylight now. Welcome to vibrant, bustling, diverse and dangerous Flooshing.