Something else to dislike about Astoria Cove 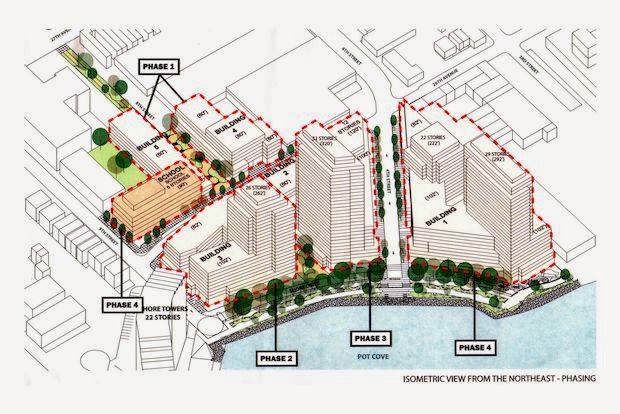 The development group seeking city approvals to build a luxury housing complex on the Astoria waterfront has come under fire because one of its principals hired a firm connected to a scandal-scarred contractor to do work on another Queens site, the Daily News has learned.

Alma Realty, the lead builder behind the Astoria Cove project, hired the company, SSC High Rise Construction, to do foundation work at another project it is developing nearby, on Vernon Blvd.

“This contractor may be working for Alma but will not be employed at the Astoria Cove site,” said a spokesman for the Astoria Cove developers. “In light of allegations that have been brought to our attention, we are asking Alma to investigate these claims further and take the appropriate action.”

SSC High Rise Construction is run in part by Michael Mahoney, according to court filings and a signed affidavit by a former employee.

Mahoney and six companies he controlled were ordered by a state Supreme Court judge to pay $1.6 million in back wages in 2011, in regards to a suit brought by then-Attorney General Andrew Cuomo.

Cuomo charged them with withholding millions of dollars in employees’ overtime and creating a racially tiered hierarchy of wages on construction sites, where white Irish employees were paid $25 an hour, black employees received $18 and Latino employees, $15.

Mahoney also pled guilty to felony tax evasion in 2011 in a suit brought by U.S. Attorney Preet Bharara, and was sentenced to two years’ probation.
Posted by Queens Crapper at 12:14 AM

This gets built and say good-bye to the "bucolic" Astoria Park - what's still left of it. A stroll in the park will be like rush hour on the subway.

so AG Cuomo orders this corrupt contractor to pay back wages it stole,now they are back building in pot cove under GOV Cuomo

The Blaz is nowhere to be heard on this either.

wait till they develop the diving pool into a concert venue.....

The neighborhood was desirable because it had good political leadership that cared about the working class people that lived there and the quality of life.

Now you have a new generation of politicians whom are career building or simply inept newbies. Their decisions are not based on what is good for the community but donations - from developers who are destroying the older blocks and housing stock with ugly crap, and from bar and restaurant owners who are trashing the shopping districts with increasingly out of control bars and cafes.

Add to this toxic mix clannish immigrants that have almost no contact with the broader community, or 30 year old kids with no careers, deeply in debt, and fixation on food that borders on pathology. None that you can build a solid community.

There is no "Astoria", just the Arab Community, the hipster kids, the Greeks, the Italians, the projects, seniors. Each group manipulated and exploited by the ruling class for its own ends and at the cost of the well being and vision of the broader neighborhood.

The fate of the Steinway mansion is the canary in the coal mine. Back in the 80s we all used to go there for Christmas parties, now the community is sullenly watching it being hacked apart.

No pride, no respect, no care. When you reach that place in life, be it a person or a community, death is not far away.

Come with signs and protest the further DESTRUCTION of Astoria. All the local sell-out pols, past and present, will be there at the Astoria Columbus Parade. Nigro, the new Fire Commisioner, is the Grand Marshal. Where? Begins at Kaufman Astoria Studios...down Steinway Street...30th Avenue...Crescent Street...Ends with rally at Columbus Statue, Hoyt Avenue & 31st Street. When? Astoria Columbus Parade, Saturday, October 11, Starts at Noon (Kaufman)-Ends at 1:30PM (Columbus Statue)

Stop bitching here and get in their faces.

Call Vallone, he will help

I wonder if Blaz isn't saying anything because Yannis Konstantinidis of Alma Realty held three house parties for him to bundle donations and donated a ton of money himself...

Good luck. The only time anything happens in Astoria is when money is passed under the table.

Astoria is a place eager to maul anyone who doesn’t compromise. Like their homeboys in Sicily and the Aegean, the community loves to purge itself of blame by placing it on something else.

The politics there is completely alien from anything ever contemplated at Independence Hall.

As a result, the community cannot tolerate whoever finds a way to expose its contradictions, point to the wound.

It’s a community where no one ever takes responsibility for anything.