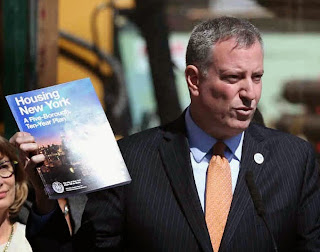 Middle-class families all over the country are helping to push other families just like them out of New York. How? By sending their kids checks. The city’s creative industries (like magazine publishing, fashion, and performing arts) couldn’t exist without a renewable supply of the young and the underpaid whose salaries (if any) are supplemented by remittances from home. It’s a form of tribute, really. Someone has to pay for the hipness of Brooklyn, and so money flows in from Shaker Heights and Merion and Menlo Park, supporting tattoo salons, craft-beer bars, and real-estate brokers.

Meanwhile, roughly a third of New ­Yorkers—nearly 3 million people—live in quarters that suck up more than half of the household’s income. (It’s small comfort to know that the housing burden is worse in eight other cities, including San Jose and Detroit.) De Blasio has cast himself as a champion of the poor, but their struggles are part of larger pressures. Almost everyone in New York is being nudged out of somewhere, migrating from neighborhood to neighborhood, from doorman building to walk-up, from two-bedroom to studio, or leaving the city with a mixture of regret and relief. The surreal cost of housing has propelled teachers out beyond tolerable commuting distances, signaled to young college graduates who lack parental subsidies that they might want to think about Pittsburgh, and ratcheted up the pressure on affordable housing so high that nearly 60,000 people applied for the 105 subsidized apartments in a new building in Greenpoint.

So what’s a well-meaning mayor to do? Does New York’s only hope of affordability lie in a summer of spectacular crime or a well-placed riot? Are we faced with a choice between choking on affluence and old-fashioned urban decay? Surely not.

Part of the answer may lie in deeply un-chic neighborhoods like southeastern Queens. To Manhattanites, commuters, and tourists, Jamaica is where the LIRR, the subway, and the AirTrain meet. It’s also an area that is encouragingly incomplete. It has underused buildings, vacant lots, and a dearth of shopping. Andrew Manshel, an executive with the nonprofit Greater Jamaica Development Corporation, estimates that his organization could find land for 5,000 apartments without breaking a sweat, and 7,500 with a little more effort.

And yet even Jamaica is too expensive for the people most likely to live there. Enter de Blasio’s affordable-housing program. Here, where developers need to be coaxed into taking a risk, where profits are low and the market wobbly, the city can pump in subsidies and pile up an inventory of affordable housing without worrying about stoking a real-estate wildfire. It’s happening: The developer BRP will soon start construction on two towers with some 500 total units in southeast Queens that could turn the neighborhood into a permanently affordable haven. That doesn’t come close to solving the problem. For one thing, de Blasio is hoping to build 80,000 new affordable units; for another, it would be nice to alleviate New York’s economic segregation rather than increase it. But Jamaica is one of the few remaining counterweights to the commodity culture of housing. Well connected but far from cool, the area is a natural habitat for cops and teachers, not slumming financiers. “People aren’t paying a premium to live in Jamaica,” Manshel says. We can only hope that they never do.
Posted by Queens Crapper at 12:19 AM

Although the population has reached an all-time high, New York functions like a brim-full bathtub: Rich people flow in from one faucet, poor immigrants from the other, and the working and middle classes spill over the sides. De Blasio is hoping that he can build a bigger tub. As progressive as he is, though, the mayor knows that you can’t just subsidize your way out of a housing crisis—especially not when NYCHA faces a rocketing budget deficit and a waiting list of 250,000. Instead, he plans to use $8 billion in public funds to unstopper another $30 billion in private investment. Affordable housing only works if someone stands to make money

Wow, some powerful writing in this article. Hope you all go on to read the full form. Justin Davidson is so on point!

Wonder if that was the also the reason that de Blasio was lending Leroy Comrie a hand on election night on Archer Ave near Jamaica Center Subway Station telling voters to vote for Comrie. I found it very odd that de Blasio was even out there.

During the summer Katz and a crew were holding a big conference at York College about the potential of Jamaica.

Just as Jamaica was used for years and decades to dump all kind of shit that no other area wanted, now it is going to be used for the powers to be to do what they want, since they seem to have back themselves into a corner and are out of options. What they did in Long Island City, well, no middle class folks can live there anymore.

Could be a good thing though, time will tell. But even though Jamaica is a big patch of land, you still could not put up that much affordable housing to take care of a gigantic problem that had been ignored for years. But then there is a lot of crap that can be torn down and Jamaica can be used as a blank slate.

But if that is going to happen, to make room for all those middle class teachers, police officers, etc, the bottom of the barrel folks are going to have to go, no doubt.

Maybe Malcolm Smith was right, a few weeks ago, when he mentioned gentrification. He more than likely had his hand in this to begin with, helping to put things into place while telling the regular folks something else.

Who knows, it is Jamaica.

How many affordable housing units are there in the Brooklyn neighborhood where he owns a home?

"Jamaica is where the LIRR, the subway, and the AirTrain meet. It’s also an area that is encouragingly incomplete. It has underused buildings, vacant lots, and a dearth of shopping...

...Enter de Blasio’s affordable-housing program. Here, where developers need to be coaxed into taking a risk, where profits are low and the market wobbly, the city can pump in subsidies and pile up an inventory of affordable housing without worrying about stoking a real-estate wildfire."


In Jamaica, instead of giving subsidies to developers up front, why not first put taxpayer dollars directly into more city services like additional sanitation pick ups, increased policing and infrastructure rebuilding? Then the area becomes cleaner, safer and much more livable. And guess what. Jamaica becomes a place where suddenly lots of people want to live. Then, lo and behold, developers will be scrambling to build there and the city can demand from the developers that units for affordable housing be set aside.

Why does the city continue its hand-outs to developers? By investing in itself first and making areas more desirable with improved basic services and renewed infrastructure, it can cut out the developer middleman and create jobs (more sanitation workers, more police officers and more DOT workers).

"In Jamaica, instead of giving subsidies to developers up front, why not first put taxpayer dollars directly into more city services like additional sanitation pick ups, increased policing and infrastructure rebuilding? Then the area becomes cleaner, safer and much more livable. And guess what. Jamaica becomes a place where suddenly lots of people want to live. Then, lo and behold, developers will be scrambling to build there and the city can demand from the developers that units for affordable housing be set aside."
---------------------

Totally right on point, I have been saying that from the beginning. CLEAN YOUR SHIT UP FIRST!

I think the article was pretty even-handed. You seem to be confounding what it reports what the deBlasio administration is planning vs. what the magazine is endorsing.

The section of Jamaica south of the tracks on Sutphin Boulevard seems ripe for redevelopment but it needs to be done in a way that would improve traffic flow and create pedestrian-friendly spaces. Jamaica is already too dense.

After nothing but De Blasio cheerleading from the media, this is a change.

Hey Bill, Park Slope could use some affordable housing. How about it? Don't you want to "help" your home neighborhood?

I'm a federal employee working in Jamaica. I grew up in Queens (Middle Village) where the 18ft wide attached house I grew up in now goes for $650K+. I want to stay in Queens, really I do but how the hell can a middle class federal worker afford these prices? If Jamaica was a cleaned up, and a little more diverse (sorry but deeper in Jamaica a white male is not welcome), and remained affordable, I buy there tomorrow.

You want more government union jobs anon? Are you crazy? Their pensions and low productivity are already bankrupting this city.

Better off in Jamaica then Middle Village.
Face it, Jamaica has a few good people left who don't deserve this but for the most part its too far gone to save. Jamaica's inhabitants enjoy living in pig pens and cant be domesticated no matter how many times you clean up after them. These affordable housing people are likely cleaner. The only fix is to evict all the druggies, slobs, slumlords, bedbugs and roaches and start all over over.
Jamaica's death sentence was signed in 1965 by Lyndon B. Johnson's pen. Its simply to far gone to save.