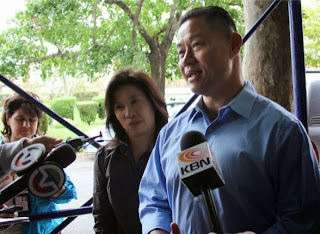 Former city Comptroller John Liu said along the recent campaign trail that he is fighting $525,000 in city fines for illegal campaign posters in his 2009 comptroller run.

But his lawsuit challenging the fines has sat idle in state Supreme Court in Manhattan since February 2013 with no clear sign of when it will be initiated, court officials said.

Liu’s 2009 campaign committee, People for John Liu, originally filed the lawsuit against the city in Brooklyn in 2012 and later transferred it to the Manhattan court in February 2013.

After the transfer, the lawsuit has remained in legal limbo as Liu conducted two campaigns: an unsuccessful bid for mayor and his current primary bid against state Sen. Tony Avella (D-Bayside).

Once the lawsuit reached Manhattan, People for John Liu never filed a request for judicial intervention, which is necessary for the case to be assigned to a judge, according to court officials.

When asked at his Primary Night party why he had not filed a request for judicial intervention yet, Liu referred TimesLedger Newspapers to the attorney representing People for John Liu in the case, Martin Connor.

Connor said the lawsuit was originally filed in Brooklyn because Manhattan’s courthouse was still closed after Superstorm Sandy hit the city. He also said a request for judicial intervention had been filed in the original case before it was transferred to Manhattan, but refused to discuss the case further.

“We’re going to be reaching a settlement later this month,” he said.
Posted by Queens Crapper at 12:34 AM

There is no reason for Dept. of Sanitation to "settle" this case for anything less than the full amount of the violations ($500k+).

Per the court documents, at no time has Liu's committee ever challenged the validity of the violations, or denied that the postings actually occurred as alleged. All that is being challenged is whether the violations were properly served on the committee's treasurer. Once before, it was determined that similar violations had not been properly served -- and so Sanitation simply re-served them (resulting in the present lawsuit). If it is determined that Sanitation again failed to properly serve these violations, then Sanitation may serve them again, a third time. There is no reason for Sanitation to stop attempting to collect the full penalty amount, and to do so would not be in taxpayers' interest.

And the Environmental Control Board actually granted Liu's committee's financial hardship application, to avoid pre-paying the penalty as is ordinarily required? Seems grossly inappropriate, considering that after obtaining the hardship waiver, Liu had millions on hand to fund his campaigns for Mayor (2013) and State Senator (2014).

justice must be serve.
This is goona be example to other .
Everyone has to be thing twice before do something.we don't want no corruption in the city.

When an civilian gets a violation from the city, that person can't shlep the case for five years. John Liu can. He is above the law apparently. Glad he lost on Tuesday.

John Liu is a bad person because of how he was raised.

The son of a convicted bank thief acts like he was raised by a bank thief.

Sandy! It's the all-purpose excuse.

"Reaching a settlement later this month"

Exactly why John ran for the State Senate, so he could get his moron (or traitor, or criminal) fans to donate money to pay his fines.

This is years late after a disgraceful series of lies about why he refuses to pay these legitimate fines in the first place. (Including the one about FIGHTING the fines. Filing a lawsuit, then doing zilch, then settling out of court years later is not FIGHTING it's delay).

No average citizen can get away with this nonsense. Liu has no place in public service.

Why would anyone expect Liu to do anything else?