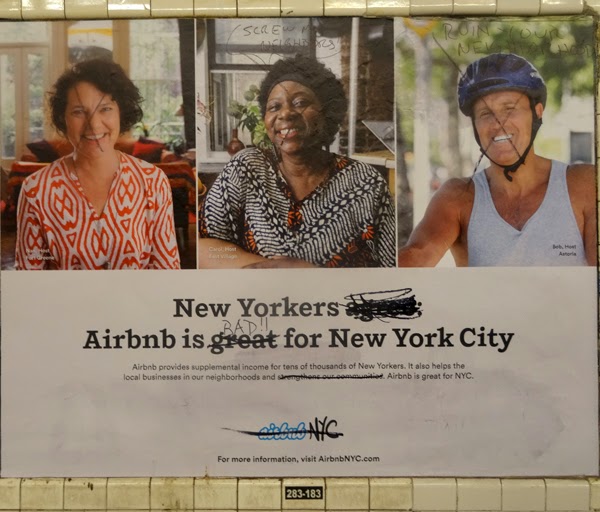 Affordable housing advocates are banding together Friday to launch a campaign against the Airbnb ads plastered throughout subway stations in New York City.

The ads are misleading according to the Real Rent Reform coalition, which formed to combat illegal hotels.

“The problem of illegal hotels predates Airbnb by many years, but Airbnb makes the problem more difficult,” said Matthew Abuelo, a steering committee member of the West Side Neighborhood Alliance (WSNA).

Typically, an illegal hotel is run by a landlord who stands to make higher profits by renting out apartments to a constant stream of tourists, rather than to a long term resident.

A residential building is then used as a commercial hotel, putting a dent in the housing supply and raising rents in the neighborhood.

It is also easy to see why neighbors of these units would take issue with this short term renting—tourists are noisy, the increased volume of people moving in and out is considered a fire hazard, and then there is the worry of being pressured to leave so their own apartments can be converted into more illegal hotel units.

New York City has struggled with the problem of illegal hotels for over a decade, resulting in a state law that prevents most renters from subletting their apartments for under 30 days unless the tenant is also present. Yet, about two-thirds of the hosts using Airbnb are doing just that, according to the State attorney general office’s estimates.

Now it’s not just landlords and tenants at odds with one another, but neighbors are pitted against each other as well, Abuelo said.

And then there's the push by the electeds.
Posted by Queens Crapper at 12:11 AM

The young white guy in the bicycle helmet is straight out of middle America's "Sex in the City" and "Friends" image of NYC.

That is the image of NYC that developers like to sell to the rubes.

you can call this marketing the airbnb mission creep.

all the elements are there in that photo,representative of the climate under the Blaz.Vibrant and diverse,pleasant and inviting.Shit as frosting.

since its been a few days since the 13th anniversary of the most devastating and apparently irreparable attack on our city and country,I wonder if any thought is being considered on the ease in which terrorists can exploit this also,since we are constantly reminded that we are the no. 1 terrorist target in the world.And wouldn't the notion of just handing out copies of apartment keys is just totally irresponsible and stupid.what if they made copies and sold them or handed them out to other fiends.

and probably most appalling to win the new yorkers support as they claim in their blightful ads,they put out a commercial exploiting hurricane sandy victims in rockaway(fitting,because of the recent interest and infestation of hipsters.why not cover staten island too?oh yeah,not that cool and convenient crossing the verrazano or using the ferry).

airbandbedbugs are trying to turn this city into a full-time resort,oblivious to all the families and individuals who pay taxes and live here.Scheiderman better put a stop to this.

These AirBnB does credit checks and things these "urban low income" people and yahoo numb nuts from west the Hudson" cant pass.
To add --who the hell are these people to tell a private business how to operate and private apt owners who they want(and don't want)in there home!

Just got back from 15 nights in NYC (7 in Queens, 8 in midtown) using AirBnB. Spent $1700 on food and entertainment alone. Had a great time. Was respectful of my temporary neighbors and left the places cleaner than I found them.