Real estate firm and big bank swaggers back at Adams 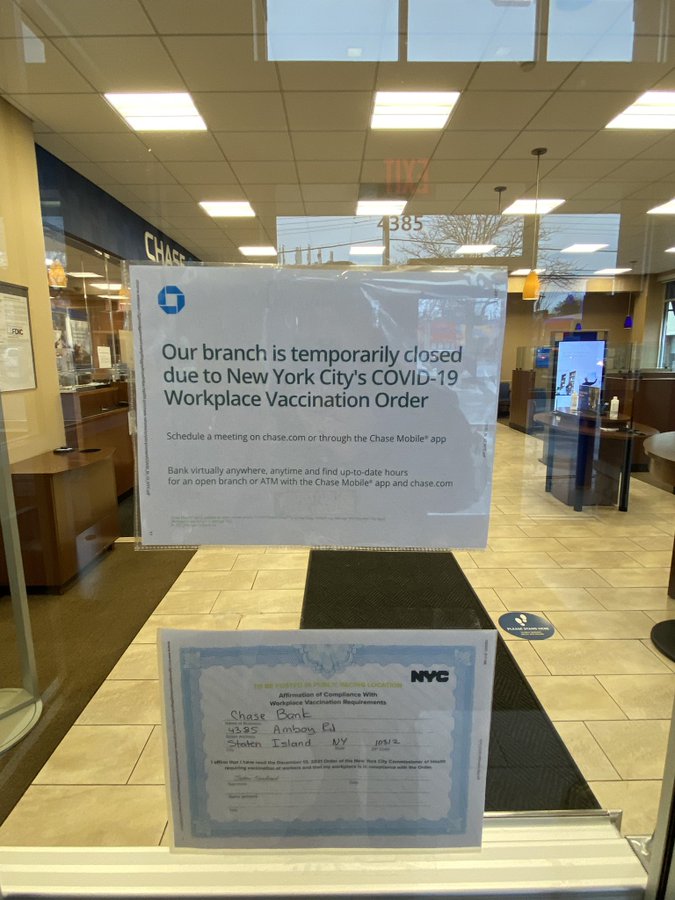 A lawsuit has been filed in federal court challenging New York City’s sweeping mandate requiring nearly all private-sector businesses to ban unvaccinated employees from the workplace, asserting that the city’s attempt to control the coronavirus pandemic deprives tens of thousands of businesses from pursuing their livelihoods.

The lawsuit filed Tuesday contends businesses like Cornerstone Realty, a Staten Island real estate firm that is the only named plaintiff in the case, are being unduly forced to fire unvaccinated workers and asserts the city’s vaccination edict lacks mechanisms for businesses to appeal.

“This case is not about vaccines, but about an employer’s right to be heard,” the lawsuit states.

The edict was one of two-term Mayor Bill de Blasio’s final acts before relinquishing his office at the end of the year. He set a Dec. 27 deadline for virtually all private sector businesses — roughly 184,000 businesses that employ hundreds of thousands of people — to require workers to show proof that they have received at least one dose of a COVID-19 vaccine. Businesses face fines of at least $1,000 for noncompliance.

The city’s new mayor, Eric Adams, has been in his job for less than a week but must immediately confront myriad challenges posed by COVID-19, including the latest surge that has spiked the number of infections to record levels.

It remains to be seen how Adams will respond to those challenges and what measures put in place by his predecessor he might keep or jettison as he formulates his own pandemic policies. Before taking office, Adams affirmed his support for the vaccine mandate, as well as de Blasio’s insistence on keeping schools open.

While acknowledging the turmoil the pandemic has wrought on small businesses, Adams made no mention of the mandate in his remarks during a visit Tuesday to a struggling small business in Manhattan, where he signed an executive order that he said would “slash red tape, reduce needless fines and penalties,” and would “bring relief to our heartbroken entrepreneurs.”

Chase Bank has shuttered more than three dozen branches in the Big Apple as the mega-bank struggles with staff shortages and vaccine mandates amid a surge in Omicron.

While the COVID variant has shelved many JP Morgan Chase employees, at least one local pol blamed the bank closures on “prohibitive” city and state mandates that require private-sector workers to be vaccinated before they can show up for a day at the office.

“It doesn’t give business an opportunity to open the front door,” City Councilman Joe Borelli, a Staten Island Republican, told The Post.

“If we want to re-populate our offices in New York, this mandate is a prohibition on many of those people coming back,” Borelli said.

Borelli also took to Twitter Wednesday to make his point, posting a photo of the laminated signs that adorn many closed branches.

“I don’t think the mandates are working in #nyc,” he wrote.

“Our branch is temporarily closed due to New York City’s COVID-19 Workplace Vaccination Order,” the sign on the door of one branch reads.

If Adams had any stones -- and he doesn't, despite the "tough cop" routine -- he would rescind all Covid restrictions ASAP. We know they don't work, and everyone in the city will get the Moronic variant sooner or later, no matter what we do -- vaxed or not, masked or not, none of it matters because IT'S A FREAKING AIRBORNE RESPIRATORY VIRUS and the vax is junk.

Non-idiots understood this two years ago. Sadly, we are controlled by idiots.

It's only fitting that the only named plaintiff hails from TrumpTurd Island.

The sign should say "Our branch is closed because our employees trust disinformation on Facebook more than medical science."

It's only fitting that the only named plaintiff hails from TrumpTurd Island.

You hypocrites with your dumbocrats make me laugh. How about you go on a vacation with AOC down to Miami? Or how about a nice spa day with Pelosi in San Francisco? And BTW, how is your lord and savior, Joe Biden's, reign working out for you? What a bunch of loser hypocrites the dumbocrats are.

Fear is the currency of control, and truth is treason in an empire of lies. Likewise, the monstrously failed scourges of the DNC have now cemented their fate in the entrenched neo-liberalism, neo-fascism and neo-feudalism (of their corporate fascist ordered mantra) that will surely be defeated by the upcoming midterms by the 'OTHER Republican Party,' versus the DNC's right of center party-machine-failed half of the duopoly CULT-disease.

So, am I the only one to notice that power has shifted exclusively between the right of center Democrats, and the extreme right wing Republicans over the course of 150 years? But, where is the benefit to any of its staunchly opposing, brainwashed members of either crooked side? The right wing and the left wing both belong to the same diseased bird. Stop fighting and pitting yourselves against each other (so tailer designed by the system of failed, monopolized-sanctioned government henchmen) when the archaic party-machine-failed system (of a criminally insane duopoly) have played ALL of you until the end of your unnatural life spans——and your expendible lives are now at the mercy of the Soros/Rockefeller depopulation phase (again and still).

So line up, SHEEPLE, get your booster jab No. 50, and listen to the Fourth Industrial World Anarchist, Klaus Schwab, founder of the World Economic Forum: ❝You will own nothing——and BE HAPPY!❞ (Assuming that one lives long enough to continually suffer through the pain and agony of a willfully compromised immune system [because of indeterminate, foreign substances continuously interfering with natural human antibodies], crushing debt [another predatory tactic to control and dominate global population], economic and social collapse, nonfunctioning, taxpayer funded government cabals [owned by oligarchical control], food rationing and all other social engineering tactics to depopulate, with impunity——to diabolical effect!)

❝Don't fool yourself: Your Biden vote was not a vote against fascism.❞ ——Caitlyn Johnstone

❝If you want a vision of the future, imagine a boot stamping on a human face——forever.❞ ——George Orwell

❝Political correctness is fascism pretending to be manners.❞ ——George Carlin

"Bunch of TrumpTurds and fakriots"
Commie Trolls are brainwashed with too much fake news on CNN !

@"It's only fitting that the only named plaintiff hails from TrumpTurd Island." So why don't you go and take the job moron? Take your fat belly from CNN and go to work.

Agreed. Except they are all Bidenzee Bidet Turd donors.
Who in return finance assholes like you for shilling.

Do tell about the science a bit. We all need to learn from you.

the vax is junk -

I digress NPC. It is a bioweapon and is not a vax by any known definition.

I see Dr. NOC Doofus and his staff are busy on this thread. Flip those burgers he/she/it’s , the Sheeple are hungry.

What is going to happen to NYC when the Federal welfare runs out after the 2022 red wave ?
Biden has surpassed Jimmy Carter, the peanut farmer for worst president. ��
Let's Go Brandon

@I see Dr. NOC Doofus and his staff are busy on this thread. Flip those burgers he/she/it’s , the Sheeple are hungry.

You see your ass in the dark, moron.
Provide some useful info, otherwise STFU.