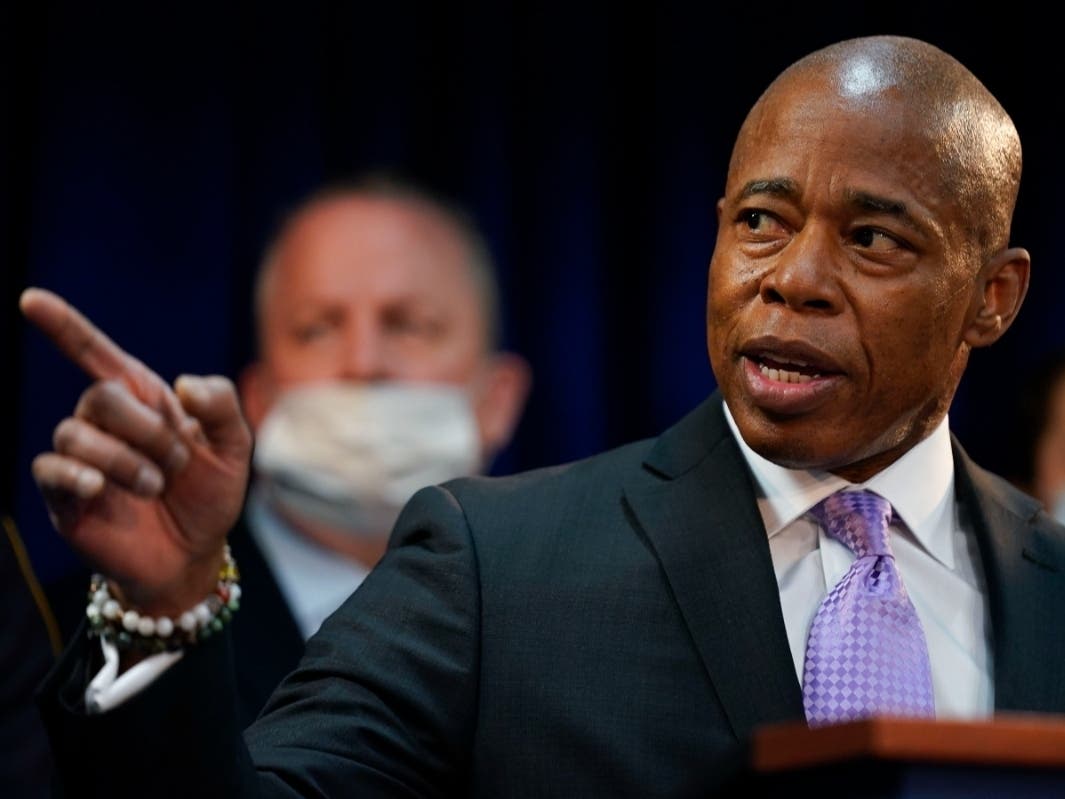 A frustrated Mayor Eric Adams offered a simple defense over accusations of nepotism and cronyism in a spate of high-profile hires: "I'm the mayor."

"I'm going to hire the best people for the job that I've known throughout my years in government and their talents," he said Friday. "And the reason I can do that is because I'm the mayor. I'm the mayor of the city of New York, and it's going to take a while before people realize that I am responsible for building a team to end the inequality in our city."

But a rising chorus of critics have argued that Adams' hires — which included his brother Bernard Adams in a $210,000-a-year position — are questionable at best.

Shortly before Adams — again — defended his hires Friday, the New York Times reported a jail investigator accused new Department of Correction chief Louis Molina of telling her to "get rid" of 2,000 discipline cases against officers. She was fired by Molina — a move she believed came at the behest of the correction officers' union, the Times reported.

Adams' officials' closeness with powerful unions aside, other hires face questions over their ethics and qualificiations.

Close Adams ally Philip Banks now serves as a deputy NYPD commissioner, despite the fact he resigned after being named as an unindicted co-conspirator in a federal police corruption case.

Adams on Friday cast the criticism as unfair elitism, rather than stemming from concerns of potential corruption and cronyism.

"When other mayors hired their lower partners, they hired their people they knew from school that they came up through the ranks — how there was nothing to say about it?" he said. "But I have the audacity to hire blue-collar people, everyday folks who are union members, retired members, it's like, 'Who do you think you are putting these blue collar workers, these everyday people who came here to this country eked up through a living, went to school at night... who do you think you are think you could do that?'"

It’s about time that New York State and NYC allowed for a recall provision !
Only 15 days into his term shows "I, Eric" is not a good pick to lead our City and we should dump this clown fast along with DA Bragg and un-elected Hochul !

Racist stupid mayor who cant even speak properly said he hired his brother due to all the white supremacists.
FACT: Most if not all the shootings and murders were committed by black suspects. Those caught all have long criminal records, most on jail release.
How many so called "white supremacists" are going to Brownsville, South Bronx and Burger King to shoot Blacks, Asians and Hispanics?
Answer: ZERO as far as I know!!
This mayor and asshole DA needs to be recalled.

Woke orthodoxy is our doom !

He's got that racist bracelet thing going - 'cause he's the mayor!

Nepotism comes along with black mayors as night follows day. It's 100% guaranteed. And they don't even think there's anything wrong with it. Of COURSE you're gonna help out the brothas and sistahs. What's the point of being Mayor if not?

What do White supremacists and Casper the
Friendly Ghost have in common? Answer- they both live only in your imagination.
You can add where is Eric Adams ability to lead a city out of the hole DeBlahblah put it in? In your imagination children.

Racist stupid mayor who cant even speak properly said he hired his brother due to all the white supremacists.
FACT: Most if not all the shootings and murders were committed by black suspects. Those caught all have long criminal records, most on jail release.
How many so called "white supremacists" are going to Brownsville, South Bronx and Burger King to shoot Blacks, Asians and Hispanics?
Answer: ZERO as far as I know!!
This mayor and asshole DA needs to be recalled.

Agreed. And Only 43 percent of the city is "white". And most live in the upper east side and Staten Island. The Dumbocrats will FOREVER blame white people for everybody else's problems. Sorry, but If I was a black person, I would be HIGHLY OFFENDED if the Dumbocrats told me that blacks are acting out because of white people. You're basically telling black people that they can't think for themselves? They can definitely seek help (mentally and physically) especially here in nyc. Its up to the individual to get help themselves. I have many successful black friends living here who literally make way more money that I do and they are very educated and deserve every dollar that they earn. So stop blaming white people for all your shit. If they don't like opportunities in certain parts of this country, then do what white people do and MOVE to where opportunity is. Stop being lazy and pointing fingers. Also, may I point out that the reason for so many black gang members is due to their lack of families. Some of these gang members' mothers were probably single teenage women and the father was too big of a loser to stick around the household. So the single black mother has to work while nobody is watching her kids and giving them a good stable family life. We must remember that back in the 80s/90s how high the black teenage rates were. So this is actually one of the main culprits of why gangs and shootings are so high these days in the black communities. But according to Dumbocrats, whites are to blame (of course).

But according to Dumbocrats, whites are to blame (of course).

Yep, the democrats and asshole DA have been blaming poverty for black crime for years. Now with this stupid racist mayor and DA its headed for worse.
Blacks blame white people and Asians for the crimes and murders they commit.

Example: Some 16 year old black kid robs a store with a gun for the 3rd time and the DA says "he's black, the poor boy did it out of poverty" ..charges dropped to a desk ticket.
Most blacks under age 30 think this way, they believe if white people wont share they have the right to take. To them this is helping themselves.
The concepts of "work" and "earning" are non existent.
Corporations manufacturing products like Kardashians, Kanye West and criminal rap stars as role models driving leased record company cars played a big BIG part in creating racism and division. If only blacks could understand they been duped. These fake role models and hip hop stars are not real, they are manufactured sucker products to sell to the black community. Most these "hip hop stars" don't own the cars and homes they are seen in, always in court cant afford to pay their fines & child support.
Blacks buying into this crap is actually fueling the poverty & slavery they hate.
Are music industry thieves, slaves & puppets what young blacks really want to be?

Now add this jackass racist DA saying crimes committed due to poverty are not crimes if your black. Young blacks now think these crime rights are reparations (payback) for slavery and will commit more crime.
Yea as in: "Go take whatever you want from white people, don't worry about jail, the law and police"

Why Are Leftists So MISERABLE ?
The left has amassed almost all of the political and cultural power in this country, so why are leftists so miserable all of the time ?

Show us one single white supremacist (or any white person) who went to Brownsvile or Gracie Mansion to kill black people Mr.Mayor.

It's only the “perception of nepotism ” !

Mr. Mayor is not off to a good start with the doofus NYC Sheeple who elected him !