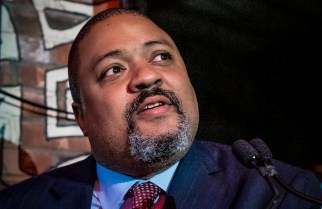 Who needs soft-on-crime judges when the district attorney doesn’t even want to lock up the bad guys?

Manhattan’s new DA has ordered his prosecutors to stop seeking prison sentences for hordes of criminals and to downgrade felony charges in cases including armed robberies and drug dealing, according to a set of progressive policies made public Tuesday.

In his first memo to staff on Monday, Alvin Bragg said his office “will not seek a carceral sentence” except with homicides and a handful of other cases, including domestic violence felonies, some sex crimes and public corruption.

“This rule may be excepted only in extraordinary circumstances based on a holistic
analysis of the facts, criminal history, victim’s input (particularly in cases of
violence or trauma), and any other information available,” the memo reads.

Assistant district attorneys must also now keep in mind the “impacts of incarceration,” including whether it really does increase public safety, potential future barriers to convicts involving housing and employment, the financial cost of prison and the racial disparities over who gets time, Bragg instructed.

In cases where prosecutors do seek to put a convict behind bars, the request can be for no more than 20 years for a determinate sentence, meaning one that can’t be reviewed or changed by a parole board.

The Office shall not seek a sentence of life without parole,” the memo states.

Under state law, that punishment is reserved for the most heinous of murderers, including terrorists, serial killers, cop killers and fiends who kill children younger than 14 during in connection with sex crimes or torture.

NYC Liberalism Is a Mental Disorder !

And where does Katz stand on all this insane shit?

Bragg wants to keep the brothas out of prison at all cost. Amazing that Manhattan now has its very own crack-pot progressive DA. It's open season for criminals. No doubt the smash-grab thefts, the gangs of looting ghettoites, the car jackings, etc. are all about to go sky high soon as word gets out that no punishment follows.

Can the Mayor do anything about this? Like many another city, New York has opted for a mostly chocolate administration. Every time that happens, wrack and ruin follow swiftly. So much for things getting better now that the imbecile Wilmhelm is gone.

Maybe this is good for Queens and will move some of the crime over to Manhattan.

Elections certainly do have consequences, and funny how this down-ballot office has more impact on quality of life as any federal office.

Will this be another reason for voters not to trust the government of the NYS ?

I can't possibly see how this might go wrong. There's obviously no examples of that ever happening in world history.

Never bend the knee. My ancestors that were able to survive the nazis/soviets were correct that history repeats itself.

Western values will be tested to the brink "The Great Reset"! UN2030
My point is this is just starting so buckle up Sheeple you wanted this Crap.

By the way, Bragg's campaign received $1M from George Soros, who continues to fund crime-friendly DAs all across America.

What's in it for Georgie boy? Hmmm.

Everyday is January 6 for NYC Democrats !

It's not over! "They"need Mail in voting to cement this in place.

Truly, George Orwell's 1984 was a prophetic dream. Not a work of fiction.
What we ended up with was a horrible cocktail of the worst parts of 1984, Brave New World, and Atlas Shrugged.

And you wonder why Trump was elected?

This asswipe DA Alvin Bragg needs to be physically attacked by a recidivist criminal and then let's see how that affects his views on crime.
What a fucking idiot the people of New York County elected. They deserve him and his pro-criminal bias.

It’s working in San Francisco, Philly and Chicago, why wouldn’t it work here.

I'm sure the "freedoms loving" and "tyranny crying" right wing nuts won't be happy until everyone is locked up forever for whatever petty crime they may or may not have committed.

Considering that poor people cannot afford a decent lawyer and therefor cannot get a fair trial. This move by the DA is a step in the right direction.

Can he be recalled ?

"There are no solutions, only trade-offs" - Thomas Sowell.

Speaking of criminals. I see tomorrow Jan 6th, is the first anniversary of the Trumpanzee Traitors Insurrection. Lots of traitors yet to be prosecuted there.

Nothing to see her folks.

Soros and his crew backed DA.
LA, San Francisco also have their own Soros "stooge" DA-s.

Many people belive January 6th Wasn't an Insurrection, and Ashli Babbitt Wasn't a Criminal.
Trying to scrape together an "insurrection" out of this is like calling the burning looting riots of 2020 "protests".
And there are people that unironically say that 1/6 is worse than 9/11. Those people are SICK!

NH is celebrating insurrection day, outside the Concord state house.

Cuomo getting kicked out of CNN before he can lecture us all about the "insurrection" is the best gift 2021 gave us as far as CNN is concerned.

Everyone listen up said...
Anyone who has listened to Alex Jones knows EXACTLY why this is happening.
People seem to think Alex is crazy (and I admit he is a nut about somethings), but look at all the things he said that came true. Its almost scary.

Seems like you are happy with this new DA, unlike the local right wing nuts who want to impose their Tyrannical "lock everybody up for any reason" ideology.

I'm sure the "freedoms loving" and "tyranny crying" right wing nuts won't be happy until everyone is locked up forever for whatever petty crime they may or may not have committed.

I hope some ghetto hohtep shoves a pistol in your face, takes your wallet or purse, watch and jewelry, and then you can watch as they get the "justice" of a misdemeanor crime and are out of police custody before you can even call up your credit card companies.

The sad thing is you will never, ever, realize that you are a complete imbecile.

THE ENTIRE DEMOCRATIC PARTY
IS IMPLODING, AND ITS INCREDIBLY AWESOME TO SEE..

Criminal lovers and criminal supporters are applauding and rejoicing over the news!!

They won't change their minds until many of them and their loved ones are attacked or killed by the very same people they defend and fight for.

Hopefully, that will happen to them very soon.

Andrew M. Cuomo - I work for the people said...

My advice to potential tourists is Stay the fuck out of Manhattan and the rest of NYC! If you get mugged, robbed or assaulted you'll be considered the transgressor by the dunderhead DA Bragg.
When NYC becomes a tourist desert Bragg the shit-for-brain DA will be responsible. Of course he'll blame the dearth of tourism on racism. What a magic word that has become for Black screw ups.

This race to the bottom is sad to watch. It's like watching those limbo videos, just when you think its impossible to go lower someone slides under like a piece of card board. The scale of morality in humans seems to be the same, lower the bar the people that moved under it will just go lower.

@"The sad thing is you will never, ever, realize that you are a complete imbecile. "

Says another clueless Fakriot jackass. I presume you are another one of those brain dead Fox Sheeple who think Traitors are patriots.
Fuck You!

If Eliza Orlins won, it wouldn't be Soros' fault, it would be because she's so fucking hot!