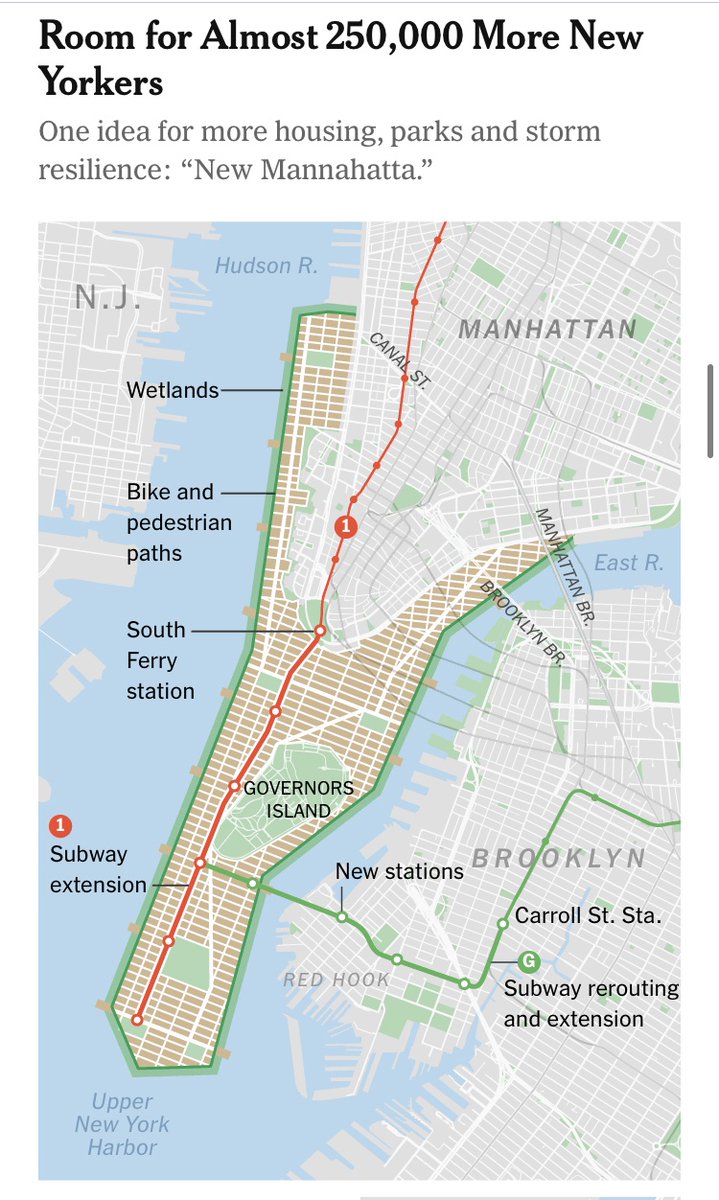 On Jan. 1, Eric Adams was sworn in as New York’s 110th mayor. He is now in charge of the city’s response to big, and growing, problems. One is a housing affordability crisis. Another concerns the ravages of climate change: sea level rise, flooding and storm surges.

There is a way to help tackle both issues in one bold policy stroke: expand Manhattan Island into the harbor.

Last September, after witnessing unprecedented flooding from the remnants of Hurricane Ida, Mr. Adams said that it was “a real wake-up call to all of us how we must understand how this climate change is impacting us.” This realization should spur him to pursue aggressive measures to mitigate climate change’s devastation.

Both Mayors Bill de Blasio and Michael Bloomberg offered climate-change plans that included extending the shoreline along the East River in Lower Manhattan. But these proposals, while admirable, would be small steps and would hardly make a dent with problems of such big scale.

This new proposal offers significant protection against surges while also creating new housing. To do this, it extends Manhattan into New York Harbor by 1,760 acres. This landfill development, like many others in the city’s past, would reshape the southern Manhattan shoreline. We can call the created area New Mannahatta (drawn from the name the Lenape gave to Manhattan).

A neighborhood of that size is bigger than the Upper West Side (Community District 7), which is 1,220 acres. Imagine replicating from scratch a diverse neighborhood that contains housing in all shapes and sizes, from traditional brownstones to five-story apartment buildings to high-rise towers. If New Mannahatta is built with a density and style similar to the Upper West Side’s, it could have nearly 180,000 new housing units.

Opinion Conversation The climate, and the world, are changing. What challenges will the future bring, and how should we respond to them?

I can't wait. More space to park my car.

(BTW. Anyone been to the southern half of Roosevelt Island lately? By all the new development? Very nice parking.)

NY can't finish the 2nd Ave subway, how do they think this boondoggle will ever happen??

How do they handle all of that human body waste? Aren't they contributing to the destruction or our planet?

Lol! Liberal fantasies are amusing. It's like asking a nine year old how to solve the problem. Just make Manhattan bigger!

This appeared in the NYT today as a guest essay by economist and skyscraper fan, Jason Barr. Not sure if it's serious or satire. It makes no sense.
Let's colonize Mars first - probably cheaper and quicker.

The fact is most of Battery park and WFC is already such an extension.