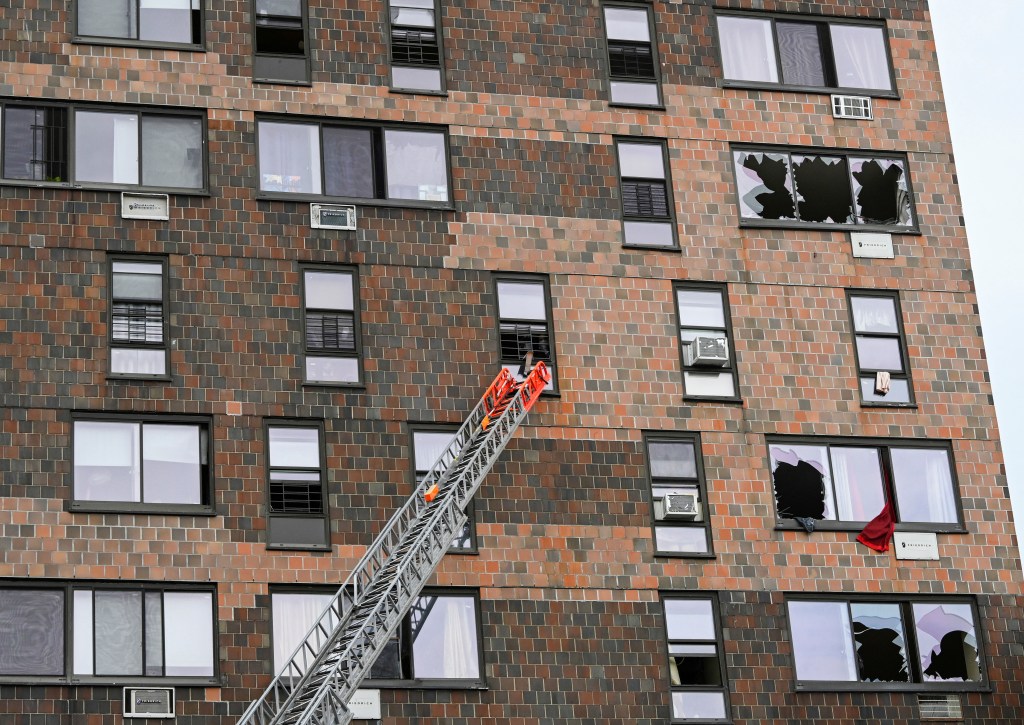 The Bronx building where at least 19 people died in a massive blaze Sunday was cited for more than two dozen violations and complaints — despite $25 million in state loans for repairs.

The citations, including for vermin infestation and faulty elevators, came after the 2013 infusion of state cash — and before the building was sold to an investment group two years ago, records reviewed by The Post show.

The 19-story, 120-unit building has been hit with complaints and violations since 2014.

The building was owned by Cammeby’s International Group, whose principal is real estate mogul Rubin Schron, until it was sold to a consortium of three investor groups in December 2019.

But not before Schron, a pal of onetime state Assembly Speaker Sheldon Silver, got nearly $25 million in state loans to make repairs and upgrades at the building.

Since 2014, one year after Schron got the state loans, the building amassed more than two dozen complaints and violations, none related to fire hazards or potential lapses in safety standards, city records show.

A message left for Schron Sunday was not returned.

The 2019 sale of the building was part of a $166 million deal for eight rent-regulated buildings in the Bronx, according to Real Estate In-Depth.

Rick Gropper, the co-founder of one of the three firms, Camber Property Group, was a member of the housing committee for the mayoral transition team of Eric Adams, sources said.

The other two investment firms with ownership of the building are LIHC Investment Group and Belveron Partners.

“We are devastated by the unimaginable loss of life caused by this profound tragedy,” the owners said in a statement.

“We are cooperating fully with the Fire Department and other city agencies as they investigate its cause, and we are doing all we can to assist our residents.”

New York authorities said on Monday the city was investigating a possible "maintenance issue" with a door that failed to close when devastating fire erupted in a Bronx apartment building a day earlier, killing 17 people, including eight children.

New York City Mayor Eric Adams, just over a week into the job, said at a briefing that the city's medical examiner determined the fire had claimed two fewer victims than the 19 announced on Sunday.

The blaze broke out on Sunday morning in the 19-floor Twin Parks North West building, which provided affordable housing units for low-income New Yorkers. Many of the residents were from the large Gambian community that lived in the neighborhood.

"This is a global tragedy as The Bronx and New York City is representative of the ethnicities and cultures across the globe," Adams said during a briefing in front of the building. "This is an evolving crisis. An unspeakable tragedy."

Adams said he spoke with U.S. President Joe Biden, who pledged that the White House will provide "whatever" New York City needs to address the aftermath of the fire.

The catastrophe was likely to stir questions on safety standards in low-income city housing. It was the second major fire in a residential complex in the United States this week after 12 people, including eight children, were killed early on Wednesday when flames swept through a public housing apartment building in Philadelphia.

Earlier in the day on "Good Morning America," Adams said smoke from the fire was able to spread due to a door being open. Doors in apartment houses are required to close automatically to prevent fires from spreading through the building.

"There may have been a maintenance issue with this door and that is going to be part of the ongoing investigation," Adams said. "This is all going to come out during the investigation."

Addressing the revised death toll, Fire Commissioner Daniel Nigro said patients had been taken to seven different hospitals in the city, which led to “a bit of a double count,” adding that many remain in care still fighting for their lives.

Investigators are looking into the possibility that a door from 15th floor to stairway was not functioning as it should, Nigro said, adding that residents would have been safer if they stayed in their apartments rather than exiting down stairways.

Some 60 people were injured in the blaze and 32 people had been hospitalized with life-threatening injuries, officials said on Sunday.

Fire marshals determined through physical evidence and accounts from residents the fire started in a portable electric heater in the apartment's bedroom. The heat had been on in the apartment building and the portable heater had been supplementing that heating, they said.

Some 200 firefighters helped put out the blaze.

One of the last things we needed to get back to old 70s NYC was major fires. And here we are! Now we have it all: out of control crime and massive price inflation. Junkies wandering around everywhere. Graffiti is coming back. Rats all over the place. Budgets are busted everywhere.

The 70s are back, people! Only this time around the music sucks and people are walking around with stupid face masks for no reason.

Let's see how their "affordable housing" apartments hold up in another 50 years. I can see them all going to shit too.

Somehow they got away with not making sure the doors shut all the way.

Tenants don't complain when their doors aren't self-closing. In fact they often break the door closers themselves.

This is truly a sad situation.
But after watching some of the news conferences from the scene, I was truly sickened by the politicians jockeying for position to get air time and pat themselves and each other on the back for political points on the backs of dead children among others. Truly political whores Schumer, Torres, Lander etc among others.

These Democrats are truly a despicable and evil bunch who have no shame at all. May they all rot in hell.

Not for nothing but if you live in an apartment for years, you’d know if the self closing door you use multiple times a day works or not. Just another way of absolving a certain group of people of any personal responsibility

This ugly building should be torn down as it is a perfect storm of many issues that plague New York - it is ugly to a degree that makes it look like its intentional, it was owned by political hacks who made millions on it while they created a violation ridden distopian nightmare, and it seemed to be (from the bits and pieces that somehow got out and are trying to be covered up) nothing less than a zoo with all sorts of behavior from people that do not seem to be familiar with the 'courtesies' of living in a modern 21st century envirnment.

So yes, what has happened, when viewed in that light, is not only all but assured, but will increase with numbing frequency as the Democrats reingineer their base from the Great Democracy into a 3rd Wold Slum.
One Person's Opinion


Yup-ALWAYS will have all the other -isms beat.

"These Democrats are truly a despicable and evil bunch who have no shame at all. May they all rot in hell".

Yeah-but remember this is the "party" that prides itself on caring for people all the time. Ask a member-they'll tell you for hours and hours and hours!

Many of the complaints were closed really fast or allowed to be self certified. They should have been violations. There are companies that are paid to wipe out landlords building code violations. I know because they’ve come to my apartment.
The loss of life is tragic. What’s anger producing is a Government entity, FDNY had to take up the slack of a private company. The management company/landlords negligence is taken care of by the taxpayers.
It’s criminal to put Immigrants at the front of the line for housing subsidies and Section 8 vouchers over citizens. This is a big reason why there are so many homeless in NYC

Race has no place in lifesaving decisions but did you notice ?

@"Race has no place in lifesaving decisions but did you notice ?"

Which group is that? TrumpTurds? Bird watchers? Librarians? Commuters?

Why are some buildings of similiar size and configuration still in great shape today? I understand greed is the cause for neglecting maintenance, but what's the motivation for maintaining buildings for 50 or more years that don't have these problems?

@"Race has no place in lifesaving decisions but did you notice ?"
Yes I noticed the race of the Fireman !