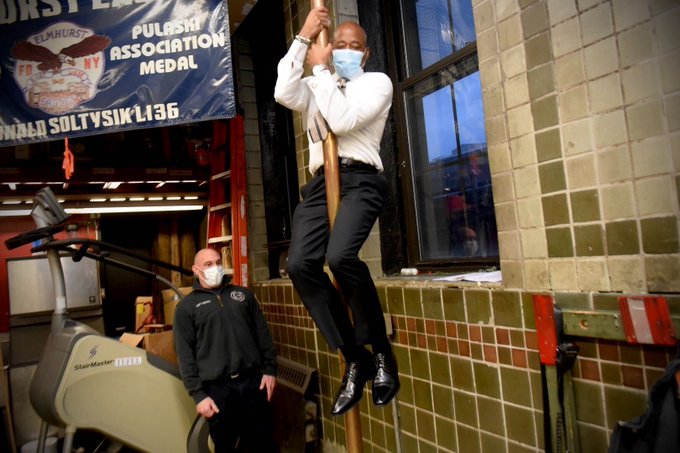 Less dignity than your average stripper.

Looks like he's been hanging there for 10 minutes just to get the perfect photo.

It's a rat. Don't let it touch my Gucci Loafers. It's your job to kill it.

Pandering to the stripper vote.

C’mon guys. You’ve had your laughs , this just ain’t funny anymore.
You can bring me down easy now. I swear on my Momma’s framed photograph, I’m not defunding the Fire Department.

Every cop’s dream is to be a fireman

Sadly and ironically, I have respect for ACTUAL, former Bronx pole worker, Cardi B., than I do for this counterfeit intellectual 'wanna be,' and cognitive dissonant racist, public servant impostor, proven liar, coward and soul bartering hustler. At least Cardi B. didn't pad the payroll with her relatives without permission, much less all disregard for the official city waiver requirements, during the first staggering week of his unqualified role of visibly failed leadership that he abused——faster than dumb Blasio bolted earlier on December 31st from 'Shitty' Hall! The Big Brass Balls at Shitty Hall just keep growing bigger than King Kong's nuts!

And just like former David ('Whitey') Dinkins (doing his best, one-term 'Black Face' shtick), Adams and his fresh trail of entrenched cronyism and nepotism will continue to flagrantly abuse the public payroll with impunity, destroy morale and all pretense of public trust, whilst the media will mechanically look the other way——exactly like they did with his demented, morally reprehensible predecessor, de BLASS-hole. (Official criminal misconduct like this makes Boss Tweed of Tammany Hall look like a champion of integrity.)

So, ATTENTION: The last of the (majority) White escapees from New York (to bolt to sane- and-dignified Florida freedom), please hit the light switch on the way out: Adams' adoring, lefty-Marxist 'darkies,' leeches, Welfare Queens and third rate mooches embracingly love to be duped by one of their own shades of dark chocolate——the REAL 'Black on Black' crime wave——replete with their 'minority-majority' blessing!——or is it NOW the 'majority-minority' mandate?

Trying to get his pole numbers up.

Every cops dream is to be a fireman.