Rezone me once shame on you... 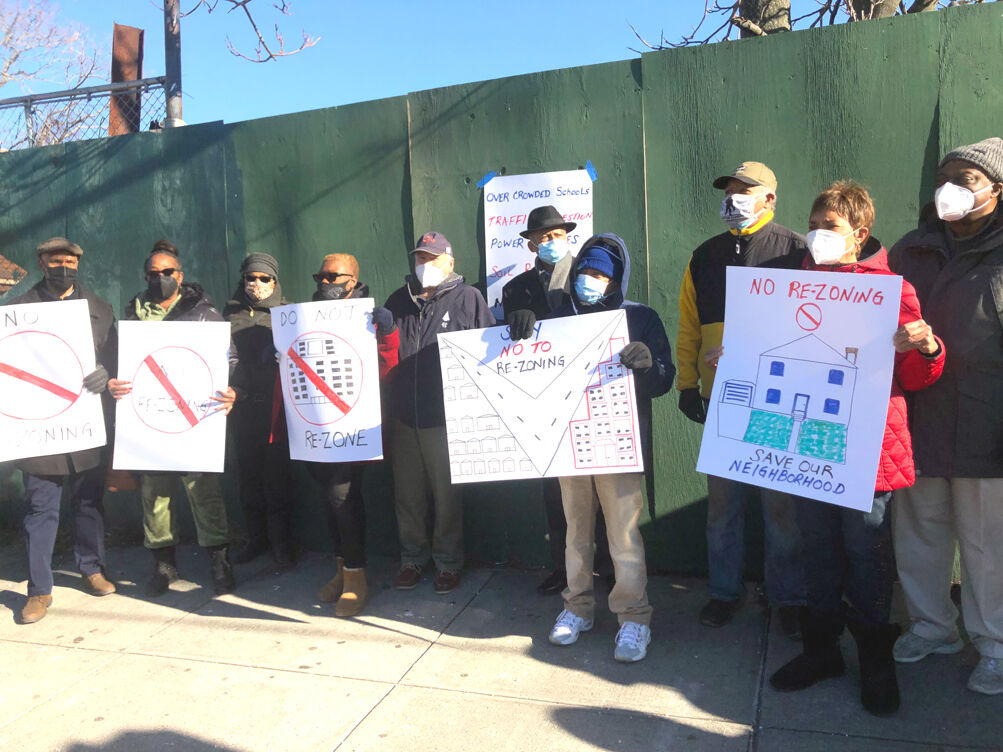 A rally was held in Springfield Gardens on Tuesday to protest against the development of an apartment complex.

Civic leaders and some members of the community say the neighborhood is already stressed as it is with traffic and infrastructure — there is constant flooding from an overflow of the sewers during heavy rainstorms — and that a new housing complex for more than 30 people with a parking space would add to the troubles of the area.

“I’m looking at the traffic,” said Marcia O’Brien, president of the Rosedale Civic Association, before about two dozen people at the corner of 147th Avenue and Guy R. Brewer Boulevard. “The vehicles and the trucks are double-parked. I’m standing right here as cars are backing up here, backing there and backing up over there. How are they going to build an eight-story building here?

“We are still waiting for Part B on the flood infrastructure project.”

After Community Board 13 voted down a proposal 32-0 with no abstentions, developer Ranbir LLC told community members that the proposed mixed-use apartment building at 146-93 Guy R. Brewer Blvd. would be seven floors instead, according to Bryan Block, the CB 13 chairman.

There was also construction going on at 182nd Street and 147th Avenue to alleviate flooding in the area.

“I’m here because this also affects Cambria Heights and whatever happens in Springfield Gardens affects all of us,” said Block, who is also the president of the Cambria Heights Civic Association. “This is about density. We don’t need to have any more density in Southeast Queens ... we have to draw the line here.”

Block, who grew up in Bedford Stuyvesant in Brooklyn, said that his family moved to Southeast Queens in 1967 over safety and overcrowding. The civic leader also said that many families who were transplants from Harlem and the Bronx moved to have the suburban dream of living in a house with a backyard for the same reason.

“We understand that [the developer] has to make a dollar, but not at the expense of the community,” said Block. “Bartlett Dairy is here, that’s fine. Perfect. This is what we want, businesses. What we don’t want are structures that are going to destroy the quality of life.”

Bartlett Dairy, a milk and food distribution site two stories and 54,000 square feet in size, located between the Nassau Expressway and Rockaway Boulevard in Springfield Gardens, is set to provide 165 jobs. It had its groundbreaking August 2021.

“This is in our backyard as well,” said Kim Lawton, president of the Spring-Jam Civic Association, whose members live near Bartlett Dairy. “I’m saying this not as the president, but as a single mother and homeowner. I moved in this area to have a certain quality of life ... we want something that fits with the character of the neighborhood.”

Lawton would prefer a community center at the lot.

“Rezoning takes community action and this community does not approve this,” said Rich Hellenbrecht, the former chairman of the Land Use Committee and current first vice chairman of CB 13. “This is a site that is not compatible with a seven-story building. We are looking at maybe 32 apartments and 23 parking spaces. If you look around, there is no place to park for the rest of the people with cars. Some families may have two cars.”

Nothing to see here other than the city trying to rezone middle class Black homeowners out of the city.

Since America is no longer a nation, but is instead an airport arrivals lounge open to anyone that wants to stumble in, we'll have more and more of these foreign slumlords showing up with their shoddy buildings. In fact, if Herr Hochul manages to dump a lot of the single family zoning rules, it'll be open season on crap-partments, and the Asian hordes of slap-dash trash builders will show up in their many thousands to put up bug-people apartments, which will quickly fill with Asian immigrants of every stripe.

You had a nice country once, whitey. Too bad you sold it.

Well good luck to you. Now that mayor dumbdumb is gone, maybe you now stand a chance. I look at northeast queens now and it has turned to shit due to overdevelopment in the last 35 years. So good luck to you guys, you will need it!

Since America is no longer a nation, but is instead an airport arrivals lounge open to anyone that wants to stumble in, we'll have more and more of these foreign slumlords showing up with their shoddy building.

America was literally designed to be an arrivals lounge for other nations. If you want to live in a whiter country, try Poland or Finland. Or Argentina or Uruguay.

America was literally designed to be an arrivals lounge for other nations.

Yes, and once here they were expected to change their home currency for US $ and their allegence to USA. Now its a bit backwards - USA has to learn to accomodate their whims.