Some bike lanes approved in Bayside 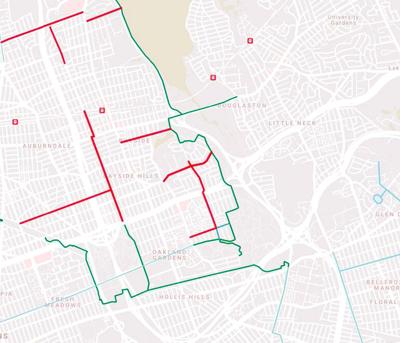 Community Board 11 unanimously voted to approve its Transportation Committee’s recommendation for 11 new bike lanes in the area.

Residents’ support for the committee’s recommended plan was also readily apparent; all of those who took part in public participation spoke overwhelmingly positively of it.

The recommendation comes after a months-long, immensely detailed process; according to Victor Dadras, first vice chair of the board and chair of the Transportation Committee, the committee worked with the Department of Transportation at length in addition to conducting its own research.

Bike lanes have long been a contentious issue in Queens, often regarding single streets. To have not only passed a recommendation of this size, but to have done so unanimously, then, is quite a feat — for bike supporters and board members alike.

“See? We can conquer anything,” said Christine Haider, the board’s second vice chair.

But in Dadras’ view, the debate should never be so complicated. “To me, it’s not about us versus them, bikes versus cars,” he told the Chronicle. “It’s about safety and equity — reimagining our streets as public spaces that everyone can share safely.”

The lanes approved by the board are predominately in the western part of the district, most of which the committee said should be protected ones. That is a departure from the DOT’s proposal, which has called for many class one and two lanes; both of those put cyclists between drivers and parked cars, whereas some other types offer more protection.

Perhaps the most significant addition is the committee’s approval of a protected bike lane with floating parking on Utopia Parkway across the full length of Community District 11. Previously, the DOT had recommended it span 47th Avenue between Utopia Parkway and 188th Street and southbound on 188th Street to the Horace Harding Expressway.

Many bikers are opposed to class two and three lanes, the former of which use sharrows, markings that indicate that bikers and drivers are required to share the road. The fact that this plan calls for many protected lanes, then, has been applauded.

“This unanimous vote shows the broad, popular support for protected bike lanes throughout Queens,” said Laura Shepard, Queens organizer for Transportation Alternatives and a Bayside native. “As the bike boom continues, more New Yorkers are biking for transportation and people of all ages are discovering the joy of riding through our parks and on our greenways.”

It’s no secret that the Transportation Committee went to unprecedented lengths to make it happen. Not only was a new infrastructure subcommittee formed, but CB 11 staff conducted their own study. District Manager Joe Marziliano and staffer Christina Coutinho drove along all of the routes DOT proposed, took pictures and measured the distance to the curb. From there, Bernard Haber, who chaired the Transportation Committee for many years and specializes in transportation engineering, looked at those measurements on city maps in order to advise the subcommittee.

“We’ve seen here what good committee work can do,” Board Chair Michael Budabin said in reference to the panel’s recommendation.

There were three routes proposed by the DOT, however, that the board did not recommend, per the committee’s safety concerns.

Is it legal to fasten a balloon to a bike's rear tire so it sounds like brrrmmm?

@GTA You can use a clothsepin and your Mickey Mantle card.

Karen says…
Oh no! Bike lanes! The Tyranny of it all. I’m losing my freedoms. I just can’t take it any more. This would never happen if dearest Donald were still prez. Where can I drive my brand new Tank sizes SUV? Where can Ken drive his pickup tank?

No one uses these NE Queens bike lanes other than some occasional weekend leisure usage. Their main purpose is to frustrate and drive out homeowners with cars. Remember, there is no subway service in this district.

Sorry but everytime I go outside here in Bayside on northern, Francis Lewis or bell Blvd. I see VERY FEW people who bike around here. The majority of people I ever see biking is delivery people and even that isn't even a lot. And that bike lane that they created by the cross island parkway is nothing but a safety hazard and I hardly see anyone utilizing it.

And, the lib insanity continues!

Love the TA trolls with their "tank SUV" tropes. Open your eyes--most SUVs in NE Queens are compact or subcompact. They are literally compact and subcompact cars with a few more inches of height. Go back to Ohio!

"If you build it, they will come." That's the theory. Deter cars, add bike lanes, and you'll get mor cyclists. EXCEPT IT ISN'T TRUE. The Northern Boulevard bike lane through the Alley has virtually NO users. The traffic light at the Cross Island is complicated -sometimes it's only green for the (nonexistent) cyclists. But it is very confusing to drivers (meaning DANGEROUS). Don't get me started on the mid-block traffic light by the (eventual) Environmental Center which has been under construction since the Obama Administration, despite the fact that there are NO pedestrians.

Build it, and they will come!!

I see lots of streets around Queens with no moving cars on them. Just sitting there as free car storage lots, compliments of the taxpayer.
Time to convert them into a parks, playgrounds, anything except a storage lot for cars.

@"And, the lib insanity continues!"
It sure does. It'll be a long time before it catches up with your fascist insanity.

@"And, the lib insanity continues!"
It sure does. It'll be a long time before it catches up with your fascist insanity.

@No one uses these NE Queens bike lanes other than some occasional weekend leisure usage. Their main purpose is to frustrate and drive out homeowners with cars. Remember, there is no subway service in this district.

Correct. The bike lane scam is part of Agenda 21 and also Agenda 2030, globalist plan under the disguise of "climate change". Is all about taxes.
Mass transit to this area is weak, LIRR and some buses. Now we can all bike in the snow and rain. Cars bad, bikes good. Now go learn mandarin and we all set.
Long live CCP.

"Where can Ken drive his pickup tank?"
Could it be a work truck ?
When I need certain repairs/materials he drives to my 4 bedroom 3 bath home I purchased for my lovely Family.
Is it to hard to think Soy Boy before you tweet Leftoid Shite ?

Let's get real. If you are young and in good shape you can ride your bike someplace as long as the distance is not too great. If you have health issues and not in great shape and you have to take the kids to school, go grocery shopping or taking someone for a doctor's appointment the car is more practical. Throw in bad weather and you tell me if you want to be out there on a bike or in a warm dry car.

Anonymous said...
@"And, the lib insanity continues!"
It sure does. It'll be a long time before it catches up with your fascist insanity.

@"Please get it straight"
Back on the meds boy !