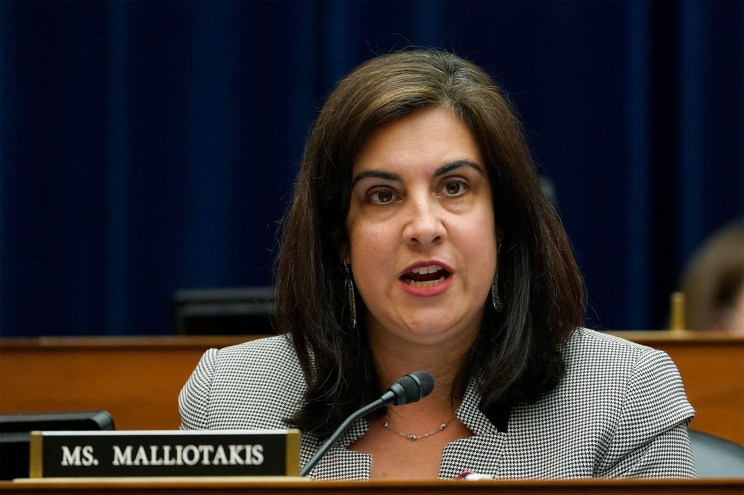 Democrats who control the state Legislature are plotting to knock off Rep. Nicole Malliotakis — the only Republican member of New York City’s congressional delegation — by redrawing a legislative district to add liberal Brooklyn precincts to her Republican stronghold, sources told The Post Wednesday night.

The Democrat’s plan would drastically alter the 11th congressional district, which combines Staten Island, her political base, with some more conservative areas of southern Brooklyn, including Bay Ridge, Bath Beach and Dyker Heights.

Under the redistricting plan that would go into effect for elections later this year, the district would include Bay Ridge but then snake northwest and take in the more heavily liberal Democratic neighborhoods of Sunset Park, Red Hook, Gowanus, Windsor Terrace and Park Slope, legislative sources said.

“Those are big Democratic areas,” one legislative source said.

Legislative insiders said if a Democratic candidate can run up the score with 80 percent of the vote in the Brooklyn side of the district, he or she can win by capturing about 40 percent in more conservative Staten Island.

The 11th CD is considered a purple or bellwether district as currently constituted.

Malliotakis defeated one-term Democratic incumbent Max Rose in the 2020 elections, aided by a strong showing by former President Trump in the district. Rose is seeking the Democratic nominations again in a potential rematch.

Brooklyn Democrat Assemblyman Robert Carroll, whose district takes in all of Park Slope and who graduated from Xaverian HS in Bay Ridge and has family roots there, has told politicos he is considering running for the redrawn congressional seat, sources said.

The Democratic primary also includes Democratic socialist Brittany Ramos DeBarros, who, like Rose, is an Army veteran who served in Afghanistan.

Malliotakis told The Post she’s a victim of a partisan hit job.

“The people of this district and the state of New York voted not once, but twice, for non-partisan redistricting. To gerrymander a blatantly partisan map dilutes the voice of my constituents, defies the will of New York’s voters, and is a direct assault on the state constitution,” Malliotakis said.

One party rule MUST happen by any means necessary!

Too bad it's a party best described as the American Taliban trying to achieve this.

It isn't voter suppression when NY does it!

Threat to our Democracy!!

Am I doing it right?

If you can't get her out by the ballot box, get her out by redrawing district lines to your advantage. I feel like we are living in 1960's Russia. One party rule at it's finest. The scumbag Democrats will stoop to any means to be in charge.

People wake up and vote these Socialists out in November or we are doomed.

The Democrats still playing softball with these traitors. The Trumpanzees have gerrymandered over half the country, and all the Democrats can manage is Fascist Island and a few districts in the Boroughs. They're still waiting for this "Bipartisanship" that went out the window long ago with Karl Rove, Gingrich and other Traitorous Right-wing Turds.
Time for Dems to step up to the plate and start playing hard-ball with these vermin.

That blabbering baggage is a typical hypocrite. Her shit party has been passing “laws” to suppress voting in areas unfavorable to them and, if that fails, setting up politicians on local boards with authority to overturn elections outright.

As for gerrymandering, neither party is guiltless here, but the gop has made a science of it, about the only science they believe in.

Go straight to hell babe, and take trump with you.


The Democrats still playing softball with these traitors. The Trumpanzees have gerrymandered over half the country, and all the Democrats can manage is Fascist Island and a few districts in the Boroughs. They're still waiting for this "Bipartisanship" that went out the window long ago with Karl Rove, Gingrich and other Traitorous Right-wing Turds.
Time for Dems to step up to the plate and start playing hard-ball with these vermin.

Being ignorant, brainwashed, and a Demorat is not the RIGHT way to live one's life.
Prove Me Right...

Voting for a democrat in 2022 is like hiring Sweeney Todd to run your barber shop.

Butch in Queens said...
The greatest conspiracy theory is that the government is out to help us.

I demand an Asian man who identifies as a black woman to be the next justice.

"Go straight to hell babe, and take trump with you."
Another typical NYC victim of disengaged cognition connection of the mind.

The Republicans can't hold a candle to Democratic Fraud. Just look at the border and their nighttime flghts to drop in 1000s of illitrate voters into different electrial districts.

If Leftoids considers this progress, then I hate to see what failure looks like.

@" he actually thinks laws are being written to suppress voting."

Well, Rob is very correct. The traitorous TrumpTurds don't believe in democracy, because demographics are moving against them at high speed.

Rob is so dumb. How dumb is he? He wears two smart watches...