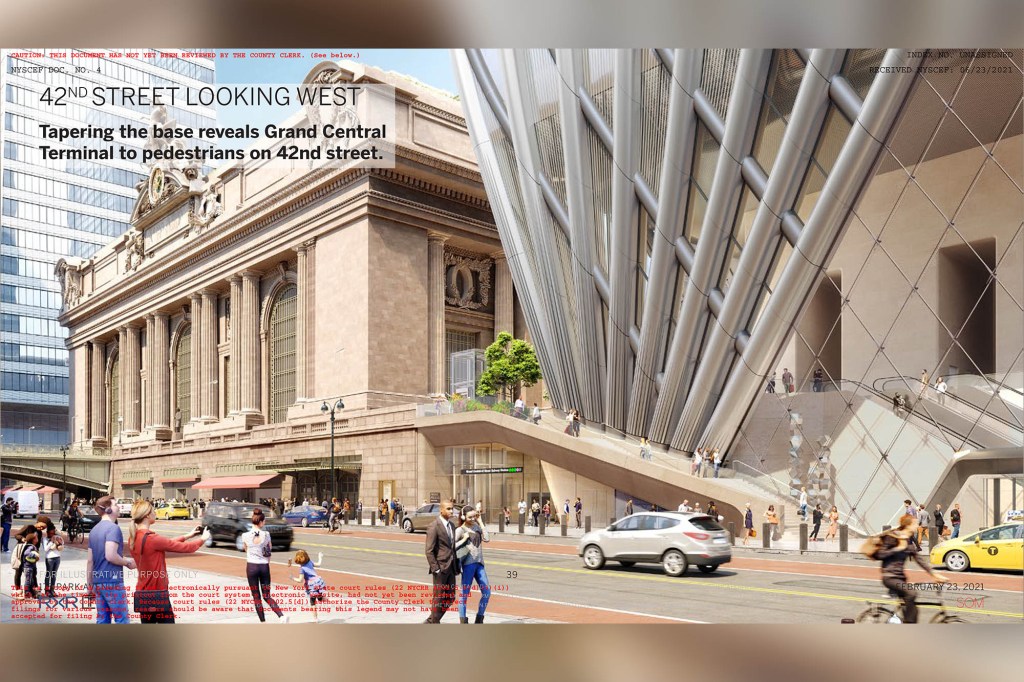 An 82-year-old preservationist is single-handedly waging war against a 1,645-foot mega-tower that’s set to go up next to Grand Central — claiming the behemoth building would mar the “heart of New York.”

Christabel Gough, the secretary of the Society for the Architecture of the City, filed suit in Manhattan Supreme Court Wednesday seeking to stop the project at 175 Park Avenue, which the complaint says would “completely overwhelm and resign to utter insignificance the grandeur of Grand Central.”

“I came here with my grandfather when I was a small child,” Gough told The Post.

“This is the heart of New York and it should be protected. Why do we have a landmarks law if not to protect buildings like Grand Central?”

Developed by RXR Realty and TF Cornerstone, the proposed building would be more than five times the size of the 26-story Grand Hyatt hotel its replacing on East 42nd Street.

In her suit, Gough marvels over the transportation hub that she says she “regularly frequents” to enjoy its “beauty, historic and architectural eminence and cultural significance.”

She is accusing the city’s Landmark Preservation Commission of issuing an advisory opinion, instead of greenlighting the 83-story structure with a formal opinion, which is legally required and entails a higher bar for approval.

The LPC should have required the MTA, as the owner of Grand Central, to file an application for a “certificate of appropriateness” for the project — since it will alter the terminal and its viaduct, the court papers say.

But instead, the LPC allowed the MTA to merely file a request for a “report and recommendation” — a more relaxed and non-binding standard for project proposals, the filing alleges.

The LPC issued that report and recommendation in February.

Another communist attack against the job creators!

What in the actual fuck is that? This is what passes for architecture now?

The New York City I once knew seems to be gone for good.

The mainstream Preservation Community (or what is left of it) has lost its bearings and has become very elitist and out of touch with the rest of us.

For example, those stalwarts love Hudson Yards while the rest of us find it a fitting space to dump all the problem characters that are ruining this city by scaring away tourists, residents, and in the process, strangling the arts and the economy,

and on another level, making it impossible to live here as the Democrats have made NYC an Autonomous Zone for every woke knucklehead kid to have fun experimenting with a real-time real-life video game that builds stupid unlivable fantasy dystopian communities.

GCS was saved by Jackie O only to be impaled by a 1,645 ft tall fan shaped rose trellis from Lowes. NYC is worse than Papua New Guinea.

Is that the new design for the community prison popping up in a neighborhood near you?

Modern Art at its WORST!!

Isn't this the newly design prisons that are soon coming to a neighborhood near you?

Modern Art at its WORST!!!

Way to go everyone on the board who chose this without public input.