All is forgiven Andrew 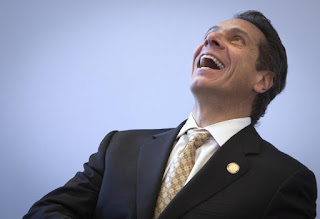 Labor bosses and corporate CEOs showed their support for three-term Gov. Andrew Cuomo at a pricey campaign fundraiser Tuesday night despite ongoing investigations over sexual harassment accusations and his handling of the coronavirus pandemic.

The minimum $10,000 per head and $15,000 per couple event was held at 75 Rockefeller Plaza, a building managed by the RXR Realty, a firm headed by Cuomo pal Scott Rechler. It attracted more than 170 people, a source familiar with the Cuomo re-election campaign said.

Rechler served as a Cuomo appointee to the Port Authority of New York and New Jersey.

Equally important for Cuomo was the appearance of some of New York’s most influential labor leaders.

Other lobbyists and lawyers appeared — including Robert Harding and others associated with Greenberg & Traurig. Harding, whose late father, Ray Harding, once headed the state Liberal Party, served as a deputy mayor for Rudy Giuliani.

The support for Cuomo clashes with many elected Democrats who called for Cuomo to resign over the sexual harassment claims — among them US Sens. Charles Schumer and Kirsten Gillibrand.

Sheep was on the menu

It is hard to run a scam and make it undetectable.
He needs the money....

They have to support the Devil in order to get the tax breaks, tax subsidies they demand for the ridiculous over development of condos, and elitist public housing many working low-income people in NYC cannot afford.

Bill Cosby defiantly proclaimed his “innocence” and so will Andrew !

It wasn't heinous and mutinous enough that NYS Mafia Kingpin, Sonny CUOMIGULA already killed 50,000 grandmas & the elderly, with impunity (as the corporate obedient press retreat into deafening silence, as sexual misconduct allegations inundate the headlines of the barely surviving propaganda rags of the day in which I wouldn't wrap fish). Now, he's murdering the rest of New York State like an attack of nuclear proliferation that just decimated everything and everyone——except corrupt politicians, cockroaches——and CHER! Nothin' ILLEGAL 'bout THAT!

❝Government is a disease masquerading as its own cure.❞ —Robert Le Favre

❝The inability to grasp the pathology of our oligarchic rulers is one of our gravest faults.❞ ——Chris Hedges

❝Yes, friends governments in capitalist society are but committees of the rich to manage the affairs of the capitalist class.❞ ——James Connolly

❝Laws are created to be followed by the poor. Laws are created by the rich to bring some order to exploitation of the poor. The poor are the only law-abiders in history. When the poor make laws——the rich will be no more.❞ ——Roque Dalton García (1974)

But Fredo's big bro will not spend a second in the hoosgow.

Scumbags supporting King Scumbag. This is why NY is what it is-a total mess.

Fat Albert was his lawyer !

CUOMIGULA isn't getting a 4th term. The DOJ investigation this time won't be a Preet Bahara whitewash job. He will make a deal to leave.

Well if Bill Cosby and Biden can get away with being creepy, then I guess so can this idiot.