Now it's a mayoral race 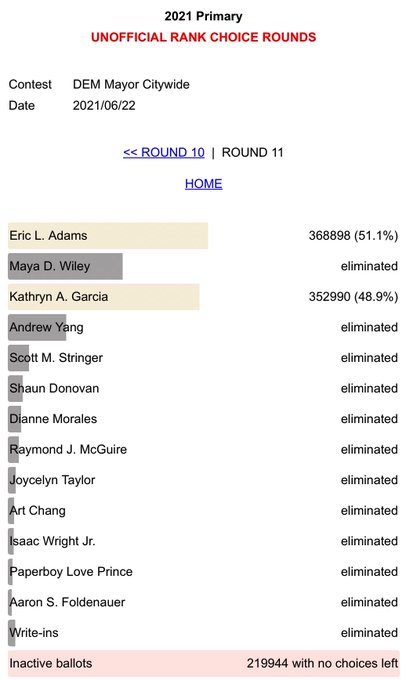 As of June 29, Adams claims 51.1 percent of the Democratic Party vote, but Kathryn Garcia trails closely behind with 48.9 percent.

On election night last week, Adams took home 31.6 percent of the vote, followed by Maya Wiley with 22.2 percent and then Garcia with 19.4. Andrew Yang conceded quickly despite holding onto fourth place through 10 rounds of ranked-choice voting eliminations.

Wiley had remained ahead of Garcia until the 11th round and was then eliminated.

Democracy, as John Lewis said, is an act. And New York City residents engaged in one of the central acts of democracy! They voted. And they acted when they chose overwhelmingly to adopt ranked-choice voting,” Wiley said in a statement following the result release. “I said on election night, we must allow the democratic process to continue and count every vote so that New Yorkers have faith in our democracy and government. And we must all support its results.”

Shut the fuck up Maya.

Sort of reminds you of the Presidential election - Biden is nowhere to be found and ...

Aroompa! he is the leader! This rank voting is BS - an excellent opportunity to play all sorts of games so the 'right' person gets in.

So much for ranked choice voting. What gets me is you can do your taxes on line. Fill out the census on line. Vote for the people’s choice awards but we can’t vote for mayor or any other political figure from our iphone? iPad? Desktop?

Re: "Sort of reminds you of the Presidential election "
Yes it does, where morons around the country still question a landslide victory by Biden. They hire the "cyberninjas" and cry on their Trumpy towels. So sad.

@ron s said... Take the Red Pill then your closed mind will open to the life-changing truth !

@ron s said... You should get out of your CNN closet and watch some conservative news.