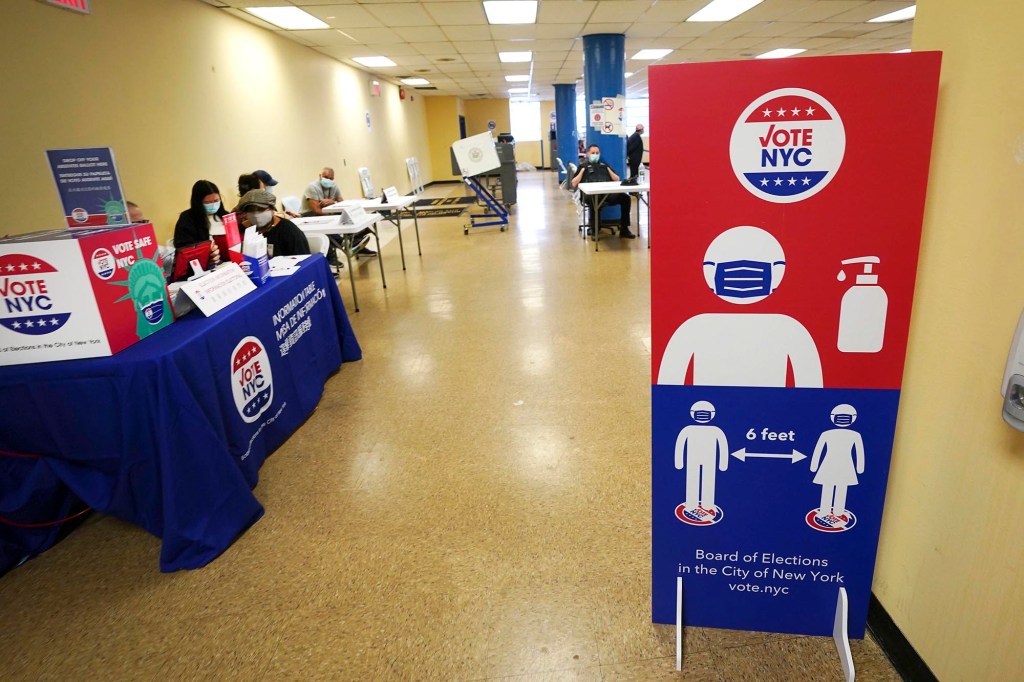 The fiercely competitive primary races for mayor are not galvanizing voters to rush early to the polls, according to the city Board of Elections.

Voters have the option to cast ballots during nine days of early voting offered at more than 100 polling sites ahead of next Tuesday’s primary election.

There are more than 3.6 million active registered Democrats and 500,000 Republicans eligible to vote in the primary races for mayor and other offices — or more than 4.1 million voters combined.

We're going to get stuck with another wack job for mayor. It's in the cards. Low Turnout Ranked choice, voter apathy = Maya or Dianne It's sad.

I actually almost all of the city council candidates for district 26 outside the museum of the moving image. there were more candidates for than voters

The real metric would be how this compares to previous early voting years. But we've only enacted early voting recently, so there's not much data.

Also wondering how many people are voting by mail instead, since COVID concerns are still in the back of most people's minds.

Only those who are smart enough (and, deprogrammed enough!) do NOT vote. Because, the entire voting racket was DESIGNED (from inception) to fail its ever languishing subjects. It's a system of depraved, taxpayer-funded elitism so that the ruling class will always have position (in their 'ALL PAY and NO WORK,' government salaries) without ever bothering to work, show up, tell the truth, or provide any pretense of public service that leads by actual example. Stop birthing your own monsters, 'SHEEPLE': You are only reinforcing the complete hastening of your powerless demise!

❝Voting gives consent to profound, political criminals to continue to fleece all of you politically indoctrinated 'SHEEPLE' like human cattle——ALL the way to the bloody red gates of the abattoir. You DO NOT have to be livestock for criminals and archaic, party-machine-failed cults AND government-entrenched Mafia crime family rings. Nobody ever CHANGED the MAFIA——by JOINING IT!❞ ——Anonymous

❝Voting has become a farce, if indeed it was ever anything else. By voting, the people decide only which of the oligarchs pre-selected for them as viable candidates will wield the whip used to flog them and will command the legion of willing accomplices who perpetrate the countless violations of the people's natural rights.❞ ―—Robert Higgs

❝Voting is not an act of political freedom. It is an act of political conformity. Those who refuse to vote are not expressing silence. They are screaming in the politician's ear: 'You do not represent me. This is not a process in which my voice matters. I do not believe you.'❞ —―Wendy McElroy

❝The political system, as many Bernie Sanders supporters are about to discover, is immune to reform. The only effective resistance will be achieved through acts of sustained, mass civil disobedience. the Democrats, like the Republicans, have no intention of halting the assault on our civil liberties, the expansion of imperial wars, the coddling of Wall Street, the destruction of the ecosystem by the fossil fuel industry and the impoverishment of workers. As long as the Democrats and the Republicans remain in power, we are doomed.❞ ——Chris Hedges

❝Laws are created to be followed by the poor. Laws are created by the rich to bring some order to exploitation of the poor. The poor are the only law-abiders in history. When the poor make laws——the rich will be no more.❞ ——Roque Dalton García (1974)

❝The illusion of freedom will continue as long as it's profitable to continue the illusion. At the point where the illusion becomes too expensive to maintain, they will just take down the scenery, they will pull back the curtains, they will move the tables and chairs out of the way——and you will see the brick wall at the back of the theater.❞ ——Frank Zappa

❝It’s ridiculous to talk about freedom in a society dominated by huge corporations. What kind of freedom is there inside a corporation? They’re totalitarian institutions——you take orders from above, and maybe give them to people below you. There’s about as much freedom as under Stalinism.❞ ——Noam Chomsky

❝Alas, mental slavery is the worst form of slavery. It gives one the illusion of freedom, makes one trust, love and defend one's oppressor, while making an enemy of those whom are trying to free you—and to open your eyes!❞ ——Anonymous

❝American government is corrupt. Those who have enough money can almost get anything they want from our government, whether it is tax breaks or subsidies, or laws changed, removed or added.❞ ——Dr. Ravi Batra, 'The New Golden Age'

❝No matter how paranoid or conspiracy-minded you are, what the government is actually doing is worse than you imagine.❞ ——William Blum, 'Rogue State: A Guide to the World's Only Superpower'

❝The oppressor would not be so storng if he did not have accomplices among the oppressed themselves.❞ ——Simone de Beauvoir

❝It's discouraging to think how many people are shocked by honesty——and, how few by deceit.❞ ——Noël Coward

❝The truth does not require your participation to exist. Bullshit does.❞ ——Terence McKenna

❝The truth that survives is the lie that is pleasantest to believe.❞ ——H. L. Mencken

❝The collapse of the Roman Empire is a few pages in your high school history book, but in reality it took nearly 250 years. Generations lived WHOLE lives inside of the collapse——which is EXACTLY where we are right now——that our WHOLE lives will be lived inside of those few pages called 'collapse.'❞ ——David Sirota (@davidsirota)

❝The gentle art of politics is getting votes from the poor, and campaign funds from the rich——by promising to protect EACH from the OTHER.❞ ——Oscar Ameringer

❝In politics, nothing happens by accident.  If it happens, you can bet it was planned that way.❞ ——Franklin Delano (Defecit) Roosevelt

And, JUST when I thought that this 'Wacky-Racket' of an ancient Babylonian 'Race for Dummies' couldn't get any worse, I SEE that former Governor David Paterson just endorsed -wanna be' autocrat/plutocrat, Eric Adams, who has repeatedly lied so much about his Brooklyn living arrangements (replete with ON CAMERA crocodile tears), that a polygraph sleeve should be strapped to his arms at ALL times——and, especially whenever he moves his lips!

So, if you think that this bogus, third rate 'Mayoralty of MENDACITY'sideshow can't get any worse, just picture the image of: The (ACTUAL) Blind (Paterson)——Leading the 'SELECTIVELY' and 'OCCASIONALLY' Blind (Adams)——and, now, as always——TONE DEAF, TO BOOT!

❝Sometimes we find ourselves walking through life blindfolded, and we try to deny that WE'RE the ones who securely tied the know.❞ ——Jodi Picoult, Vanishing Acts

❝It is easier to fool a person than to tell them that they've been fooled.❞ ——Mark Twain

❝You can fool ALL of the people SOME of the time, and if you do it just once——it lasts four years.❞ ——Alfred E. Neuman

❝It's difficult to free fools from the chains they revere.❞ ——Voltaire

❝It's dificult to get a man to understand something when his salary demands that he NOT understand it.❞ ——Upton Sinclair

❝I have never wished to cater to the crowd, for what they know I do not approve, and what they approve——I do not know.❞ ——Epicurus

FINALLY, the REAL 'Pledge of Allegiance' that is recited by ALL politicians (NOT public servants), to their corporate owners, who in turn pledge it right back to their property when they BOTH exhort: 'Don't Blow MY Scam——And, I Won't Blow YOURS!'

So, do you get it NOW, ALL QUEENS Crap 'SHEEPLE'——and, BEYOND?

I wouldn't believe Litle Miss 'Occasionally Coherent'—even if her forked, slimy, sleazy DemonRat TONGUE was notarized! In fact, believing anything said by a politician is akin (and, tantamount) to believing in all religion itself (a/k/a The FAITH Business), both of which strain all earthly credibility, like nothing else. And, the public be damned!

We are going to get stuck with another Out of Touch Loser who refuses to acknowledge the Harsh Violent city New York really is and won't do anything about it.

Hopefully people had enough bullshit and will elect Sliwa.
People are so mad about all the crime, chaos, cops with hands tied, and prison reform they are not even complaining about noise & fireworks this year.
Every Hispanic, Chinese and bodega person I know is voting for Sliwa.
Why does deBlasio hate white people so much, did his father beat his brains in?
I'm spending $5000 on fireworks, food & booze this year, screw both COVID and this SOB bastard communist. Big party.

The brainwashed college kids & black vote is the problem, they all want free stuff, free rent, no laws, universal indemnity, and show up to vote like armys for it..
NYC wont survive another white middle class hating communist progressive mayor.
Crime here is currently worst then San Paulo Brazil or some Central American shithole now. At least those people can have guns to defend themselves.
The criminals are robbing & stabbing people in broad daylight right in front of cameras, they don't give a dam. They know at worst its a ride + one hour at central booking then release back to streets with a notice to "dis-appear" court date they throw away.

"It doesn't matter who votes. All that matters is who counts the votes."-Joseph Stalin

Homeless people to get $1,250 a month ?
They will buy booze & drugs and become an even bigger problem.
Spend whoever is left on lottery & scratch tickets.

I see people in the grocery stores, 4 out of 5 times they are black.
Go straight to the ATM machine take out $100, buy cigarettes and blow the rest on 5 foot ribbons of lottery scratch tickets.
Then pull out a NY State EBT card and buy junk food and some grocery's.

How is it they always get into late model expensive SUVs as I drive a 1991 blazer with 250K miles after rent, utility's and food ?

"We're going to get stuck with another wack job for mayor" Yes we will.
New York is infected from the bottom all the way to the top.
It's all the Sheeple know !

Another 18% turnout will ensure the further destruction of NYC.

Maybe if they didn't have idiots running, then maybe there would be of a turnout. Too bad all the people who run in the democratic party are too far left and idiots.

New York City will become the next Detroit !