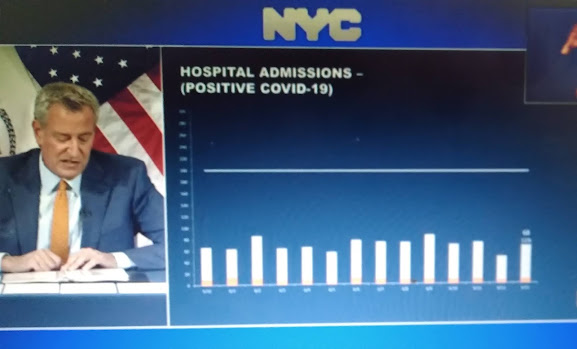 Two days after the de Blasio administration released the findings of its recent weekly COVID-19 variant sequencing study, showing that the prevalence of the dangerous new strain known as the Delta variant had fallen from 8,4 per cent. to 6,7 per cent., a London newspaper, the Financial Times, published a report, estimating the prevalence of the Delta variant in the U.S. at 31 per cent.

For weeks, Progress New York has published reports, which have raised questions about the accuracy of the weekly variant sequencing studies. These reports initially focused on the plunge in the sample size used in the studies. The de Blasio administration responded by changing the presentation of the variant study results. Then, last week, some data was restated almost wholesale.

It is unknown how Mayor Bill de Blasio (WFP-New York City) will explain the divergence in the variant data. The press office supporting Mayor de Blasio refused on Sunday to admit that the administration was presenting unreliable variant study data.

There’s little transparency to the methodology used by the laboratory to sequence the COVID-19 variants.

Many critics are coming to the fore about the de Blasio administration’s lack of transparency about its weekly variant sequencing studies. One critic, known as @BWMosher on the Twitter social media platform, published some analysis of the latest sequencing study, noting some of the restatements to the data underpinning the weekly studies. In that review, it was noted that the laboratory used by the de Blasio administration to conduct the variant studies, the Pandemic Response Lab, was a creation of the City’s controversial arm that intervenes in the free market system to provide subsidies to large corporations.

The lab, also known by the mnemonic “Pearl” for its initials, or PRL, was created in the summer of 2020 by the New York City Economic Development Corporation, or the NYCEDC, first to conduct tests for COVID-19, according to City Hall information. At some point, PRL began to sequence for variants. That the NYCEDC is behind PRL presents a conflict of interest, because the chambres of commerce in New York City have been pressuring Mayor de Blasio to reopen the economy, so that workers can return to office buildings that still remain largely empty. To that end, the titans of industry have been pressuring for the full reopening of public schools from mere months into the pandemic, so that working families could rely on schools as day care. The reliance on public schools as day care for working families was noted in a mid-year budget report issued in 2020 by the Office of the Comptroller of the City of New York Government. “If public schools don’t reopen, parents of up to a million school children will have to provide their own childcare on at least a part-time basis, inhibiting many parents’ ability to return to full-time work,” the report noted.

Were PRL to report prevalence rates for the Delta variant that mirrored the Financial Times model, then businesses, office buildings, and public schools would face pressure to delay, or cancel, their reopenings. It is not known whether the unreliable sequencing data is a result of the appearance of a conflict of interest for the NYCEDC.

Real Statistics show what the REALITY is!

Do people understand that they can no longer trust mainstream news sources because they have decided to put their own political agendas ahead of their obligations to report the truth ?
Science is about proof. Not trust, or belief.

Sheeple Can we investigate if de Blaze is related to Mousilinni ?

@ anonymous- he isn't, but he IS related to Kaiser Wilhelm...

Big deal for a fake virus.