City Council candidate curses out women and calls them nazis 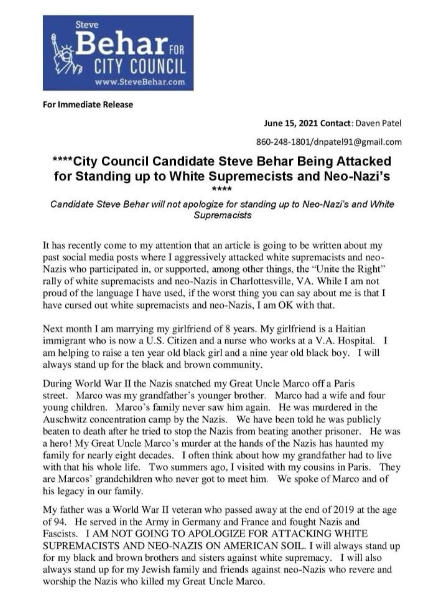 A potty-mouthed City Council wannabe in Queens has gone after a number of women on social media — along with joking about rape and apparently challenging a man to a fight after getting into an argument on Facebook.

Steve Behar, a Democrat running to represent eastern Queens, recently came under fire for a sexist tweet targeting opponent Linda Lee. He suggested her message boiled down to saying, “Vote for Me I’m a Mommy!”

Since then, more outrageous social media posts by Behar have surfaced.

Outgoing Councilman Barry Grodenchik is backing Behar, his staff attorney, to take over his seat.

Among Behar’s ravings about Christine Blasey Ford’s sexual assault allegations against Supreme Court Justice Brett Kavanaugh, Behar wrote on Facebook over two years ago, “This woman is not credible and I refuse to destroy someone’s career without any due process.”

Around the same time, he made another inflammatory post.

“Come on now! Who didn’t grope and rape girls in high school? Democrats are such snowflakes!” Behar wrote. He told The News he was being sarcastic.

Update: Where Behar gets fed his lunch and resorts to unjustifiable race baiting and shaming 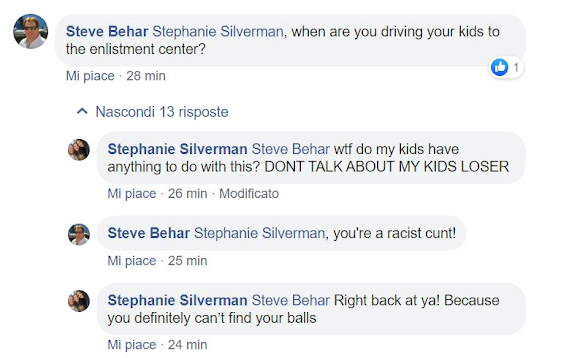 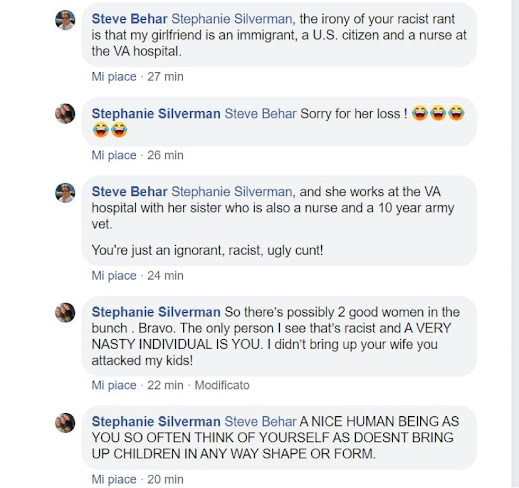 “You have no f--king business being here!” he yelled at activists gathered in Major Mark Park in June 2020, according to video posted to Twitter.

When a demonstrator interjects, “We all have business being here,” Behar snaps back: “F--k you! You’re pathetic!”

Video shows him ranting — with his face mask on his forehead — in spite of protests from a man who noted there were children present.

“You co-opted a Black Lives Matter protest for your own agenda!” Behar fumed while pumping his fist. “You should be ashamed!”

Asked by a demonstrator why Behar was there, he yelled: “I’m here to show my little niece and nephew that Black Lives Matter!”

The demonstration was one of many across the city after Black Minnesota man George Floyd was killed by a white police officer in May 2020.

Out of about 100 demonstrators at the park that day, some were protesting local electeds for taking campaign cash from police unions, according to attendee Ramy Noaman, who shot the video.

What is left to say that that asshole hasn't already said himself?

He is some weird combination of Donald Trump and a virtue signaling NYC progressive. Like what happens when you mix poop and urine.

He supports due process in regards to rape allegations. Oh, the humamity!

I don't like people who just throw Nazi accusations around casually, but it's oddly refreshing to see a candidate who's not afraid to curse.

"Vote for me. I can do and say anything because of what the Nazis did to my Uncle Marco." How do you spell pathetic? B-e-h-a-r.

Who is Behar's base? Where are the Trumpian fake-progressive rage-aholic Democrats in leafy District 23? The four friends he has on Facebook don't even live in the District to vote for him.

I'd love to see a nice internet argument between Behar and Ardila!

Although the cursing, trolling, and social media bullying are bad enough, what is also very troubling is that Behar continues to defend Barry Grodenchik, who admitted that "he paid unwelcome attention to a female council staffer."

Steve Behar is the leadership we need in CD 23. We need progressives who will fight racism and fight overdevelopment. We don't need socialist clowns like Jaslin Kaur who take money from folks associated with YIMBY dark real estate developer interests like Aaron Carr.

Barry and Steve are the one-two punch: Barry does the physical abuse and then Steve jumps in to call the victim a c*nt!

I was a supporter of Steve Behar when he ran for office years ago. I cannot believe what has happened to him. He is a RACIST - spewing nothing but HATE against not only white supremacists but whites in general. He has made countless accusations on Facebook about Bayside being racist and full of white supremacists. Yet he expects these folks to vote for him? He loses his shit as soon as anyone challenges his politics or opinion. He’s gone so woke he’s lost his marbles. Bayside does NOT need him in office.

Jaslin Kaur is worse than Steve Behar ever will be. Do you want your single family home to turn into a 10 story tower, vote for Kaur & her socialist policies.

>Barry does the physical abuse

To the anon (aka Steve Behar) who said "Oh no, a hug! The horror"

THERE IS NO REASON TO HUG ANYONE IN A PROFESSIONAL ENVIRONMENT. DOES HE HUG MEN? HE HUGGED HER BECAUSE HE COULDN'T CONTROL HIMSELF LIKE YOU CAN'T CONTROL YOUR ODDLY PANDERING AND TRUMPIAN AT THE SAME TIME MOUTH.

Unwanted and repeated hugging and kissing of someone whom he was in a position of authority over - that's the definition of a hostile work environment. It doesn't have to be groping under the shirt. I guess Barry didn't pay attention during the training - and Steve thinks he didn't do anything wrong.

Free hugs for everyone but Grodenchik.