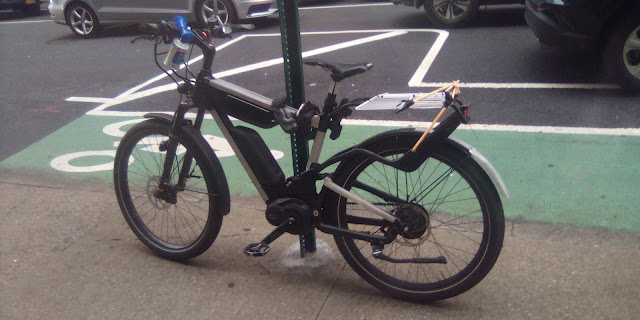 A 54-year-old real estate agent named Kelly Killian was struck and killed by an e-bike in Astoria Friday night – around the corner from where she lived.

Police said they received a 911 call just after 8:30 p.m., and when emergency responders arrived at 31st Street and 21st Avenue, they found the injured woman lying in the road.

Killian had suffered severe trauma to her head. Medics brought her to Elmhurst Hospital, where she was initially listed in critical condition, the NYPD said.

She later died from her injuries, her family said.

An initial investigation by the NYPD Highway Unit’s Collision Investigation Squad found that a 26-year-old man on an e-bike had been headed east on 21st Avenue and struck Killian, who had been walking in the crosswalk.

Her brother, Chris Killian, said his sister had been en route to get dinner with a friend at the time.

The e-bike driver – who the NY Daily News reported was a delivery worker – stayed at the scene and had not been charged as of Tuesday, police said.

These ebikes are unsafe at any speed. And these app food delivery companies have to have their riders insured and all ebikes have to have plates and registration, including citibikes (since Revel actually has license plates)

When you get an e-bike you’re getting a terrific transportation tool that moves as fast as a car but doesn’t cause the injury, death, noise or pollution that a car causes https://t.co/girF5OrFH6

This indeed was a sad accident, but QC again is showing it's bias with more red meat for it's wing nut commentators.
"reckless e-bike rider"? There are lots of reckless e-bike riders but do you have specific evidence that this e-bike rider was reckless? If so, where is it? This lady's family don't seem to think its the fault of the e-bike rider judging from this article
JacksonHeightsPost article

Quote from the Post's article.
"Killian’s family said that they are awaiting the results of the NYPD’s final investigation but do not blame the e-bike driver.

“It clearly was an accident. I’m sure the guy feels terrible,” Chris Killian told the Queens Post. “It’s not something that I would want to live with myself.”

Well, maybe there is new evidence that Queens Crap can provide? Lets wait and see.

And so it begins. All because it would be racist to control these sort of things. If you don't get pushed on the subway tracks you'll get nailed by an ebike.

Those ebikes don’t make any noise. She probably didn’t even hear it coming.

I guess you're right. I'll remove the reckless part.

All because of “Social Justice”.

They are reckless, the streetsblog urbanist crowd are bullies and want to get away with stuff that car drivers NEVER could. The only way to push back against these bullies is to call them out as bullies and if the article is a little biased by saying its reckless. That's fine.

I'm sure the pro bike anti car people will somehow attribute this whole thing to being some car driver's fault.

Shall we take a guess as to the legal status of the bike rider? If he isn't here legally, I say fine the restaurant up the wazoo. There are actually laws on the books against hiring illegals and the fines are stiff, albeit rarely enforced.

Well, high powered e-bikes aren't safe. Guns aren't safe. And clowns like this one aren't safe either.
I's fancy my chances of surviving a hit from an e-bike than an oversized SUV/PU truck any day.

Thank you for reporting this. No harm to include some involving pedestrians mowed down by cars and trucks too.

@"Stop urbanist bullying said..."
So, having a bike or e-bike automatically transforms a once normal human being into a bully?
I guess that's just like driving a big hunk of metal gives one all kinds of extra powers of authority.

ppl die from falls every year... what i want to know is how fast was this fool going...

It's a impotant ta have clean air. "How-Dare-You" bash bikes !

With the speed the speed these bikes can do and the way they are recklessly driven it's amazing more people are not dying. When I cross the street I expect the traffic to stop at a red light but with bikes they rarely do.

Again with the electric motorcycles on 64th street.
Actress actress Lisa Banes in critical.
As usual, hit and run and no license plates to track, no insurance to pay for the hospital bill and after care if she lives.
These dam bikes need to carry active insurance and be traceable.
E bikes can hit worse then cars because the impact is concentrated in the narrow 2 inch or wide front fork & frame. Over 10,000 pounds of concentrated blunt force at 30MPH. With car you go over the hood and windshield & roof and roll (you have a better chance of surviving) A e-bike at 10MPH can go right through you ribcage, break your aorta, lung or some major artery or organ

Bicyclists, E-Bike Riders, and Delivery drivers don't stop at Red Lights and STOP Signs because they know the Rules of the Road do not apply to them.

Plus, there are No law enforcement to see them running through red lights and stop signs thanks to ignorant people who want politicians to defund the police and law enforcement.

NYC is full of Reckless people riding bicycles and e-bikes. But you can't speak out against them. That means you are racist and against illegal immigrants and don't support the woke movement.

Perfectly said: Speak out against the people doing this shit and you are racist, against illegal immigrants and don't support the woke movement.
I have 2 good ears, eyes and good eyesight. Illegal immigrants and gang bangers running drugs, weapons account for most of the people doing this lawless reckless shit. Its a friggan epidemic and every time I see one of these on the sidewalk, running a light, stop sign its never been a white people doing so !!
How is giving a description of Hispanic, Asian or Black to the police after a hi & run with severe injury racist?

You also can not hear these heavy electric motorcycles coming, you get "BOOM" and (if your lucky) wake up in the hospital

No one is saying it - so I have to.
A White Woman was murdered in cold blood by a brown illegal immigrant.
When does her family hold the press conference to announce they’re suing the City for putting in bike lanes that no one wants, not requiring e- bike riders be licensed and not seizing these bikes or issuing fines to offenders?
Why Isn’t he in a jail cell?
Where are the murals for her? Where are the mostly peaceful protests because a woman was murdered?
What is the name of the murderer?
Why can’t we have photographs of his face all over media?

License plates for ALL bikes!!!

"License plates for ALL bikes"
Have you seen all the lawless cars and dirt bikes on the roads of NYC ?
NYPD can not stop or inforce the traffic rules we have on the books now and your "SMART" solution is to add more regulation. Come on Fat...