Queens Council Candidate Austin Shafran has been voting/living in Manhattan 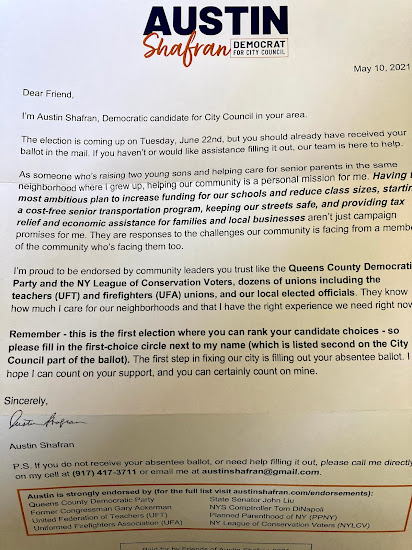 Progressive Council Candidate Austin Shafran claims he's been raising his two young sons in Bayside Queens but has actually been living on the Upper East Side of Manhattan for the last 6 years in a luxury building where 1 bedroom rentals start at $3400. The attached voter registration card shows that as of 9/20/20 he was still registered to vote in Council District 12 and hasn't voted in NE Queens since 2014. His address is 500 East 77th Street aka The Pavillion which takes up an entire city block.

Also here is a link to his Jim Owles Club Questionnaire where he wants to defund the police, fire Commissioner Shea and close Rikers 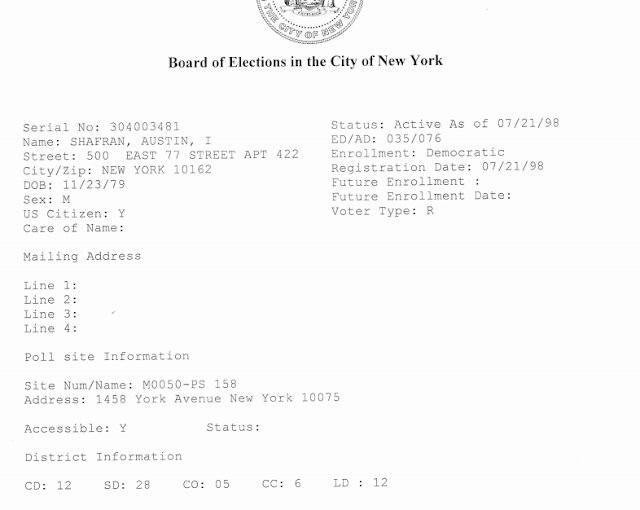 A typical Avella-loyalist view of Shafran's response on defunding the NYPD. What he said was that he would remove areas of responsibility from the NYPD and reduce the budget correspondingly so that funding followed the responsibilities. Considering he just got endorsed by the most pro-police major candidate in the mayoral race I'm not sure that he's the fire-breathing defunder that you want to portray him as.

Also it's New York, people move. The guy was raised here, is from here and sends his kids to school here.

His name should be Richard Cranium.

What a snake! Lost my vote since he clearly doesn’t understand the struggles of NE queens home ownership when he lives the high life

NO HE HASN’T, WEBMASTER!!!!
This sounds like some of Tony Baloney Avella’s nonsense. WTF has Avella done while voted out of office? Precious little. Now he returns hoping to win back his old council seat based on name recognition😂? BAH!
Time to retire and collect your two government pensions....city and state.
As a former Avella disappointed supporter, my vote goes to Austin👍.
He’s the ONLY hope for northeast Queens.

Democrat solutions to everything:
More Taxes
Make it Federal
Racist

Not a true Queens resident. He doesn’t understand the struggle of living in a home with rocketing property tax. Instead he’s living in a luxury building paying absurd money in Manhattan

Well, John Ciafone is running in the 22nd and he lives on Whitestone, which’s is out of district

He is just an opportunist as he runs here, loses moves away and then comes back and pretends that’s he has done so much for the community. He is just a puppet for the unions and doesn’t really care about Northeast, Queens.

He cheated on his first wife, he will find a way to screw the community if he is elected. Vote no to Austin paid and bought for by hotel trades.

He lives in Manhattan and Eric adams lives in fort lee! Go figure!

The guy was raised here, is from here and sends his kids to school here.

He lives in Manhattan but sends his children to school in Bayside? Is that kosher? No wonder the classrooms are overcrowded if parents from outside the district can send their kids here.

He doesn't live in Manhattan, he lived there for a few years afte lviving in bayside and he moved back to Bayside where he grew up and has spent most of his life.

Are we really going to turn into some rural backwater where people aren't allowed to live anywhere else their whole life and then come home without catching crap for it?

And the crappy comments in here about the guy's wife are way over the line. The guy got divorced, and now he's remarried, that's not some big scandal. People who seem real comfortable airing out other's life choices should be careful they don't have theirs exposed.

If that's his voter registration NOW, it means he has either (1) NOT been voting AT ALL or (2) votes in Manhattan. Queens doesn't need a liberal elitist to solve its problems. But he needs this $130k job to pay for his elitist lifestyle!

Have you seen where the people that have represented us are from?

Now in the 19th CD, we have (Democratic Primary)

Outgoing Councilmember Paul Vallone - grew up in Astoria, bought a house in North Flushing in 1998 and kept residences in both neighborhoods to keep his options open when running for office. Continued to sit on Community Board 1 and vote in Astoria until 2007, when he made the "choice" of re-registering in Flushing so he could run for City Council.

Tony Avella - (grew up in Astoria and moved to College Point 40+ years ago, then moved to Whitestone)

Richard Lee - (grew up in Douglaston; lives in North Flushing but puts that he's from Douglaston on all of his mailers and literature)

Frank Sapngenberg - (grew up in Flushing; lives in Douglaston)

Adriana Aviles - (grew up in western Queens; lives in Douglaston)


That about says it all.

Anyone but Shafran said...

The comments about Austin Shafran cheating on and then dumping Molly Rokasy are not out of line. If Austin Shafran can treat the woman he first married, Molly Rokasy, like garbage, he probably will treat his own constituents even worse. Plus he later married Jenn Krinsky who was the woman Austin cheated on Molly with, who is basically a homewrecker. This is a test of the kind of personality Austin Shafran has and will serve this district with.

Jenn Krinsky is a homewrecker said...

Vote anyone but Shafran on June 22nd!

It doesn't matter from where a crooked politician hales. Yes, it may appear to look like allegiance and credibility when a candidate resides in, and is from the district in which he/she is running. But, a corporate obedient crook is STILL a crook――and, a pound's a pound (as the song by British band, General Public goes).

Hence, the SOONER that everyone learns that politicians don't give a F**K about anyone except themselves (and their hyper-corrupt, entrenched, establishment-rigged, party-machine-failed duopoly system that works to secure their cradle-to-grave pensions, ALL of which YOU continually pay for, but don't consent to, and worse, no defined pensions for the entire rank-and-file workforce), then you can stop playing charades and playing stupid political games that win you even dumber political booby prizes (the politicians themesleves).

Just listen to their unrealistic lies that are not so cleverly disguised as promises, and outright guarantees that we have ALL heard before (on an 'ad nauseam' loop, and IN PERPETUITY!), and yet the minute that these voracious thieves receive official confirmation into their exclusionary, CULT-PARTY club, ALL 'Taxation WITH Representation' ceases to exist (if it ever existed in the first place). That's when your telephone calls go unanswered, and your government-caused problems, and community social issues are ALL left to vigilantism and lawlessness――but, OH how that totally useless, costly, monthly newsletter gets PROMPTLY delivered to your home address, replete with ALL of the proper contact and address numbers that they willfully ignore――COMPLIMENTS of the ever languishing taxpayer who is left to rot. Is THIS the procedure that is automatically adopted (without censure) after one solemly takes the oath of public office, I ask? We've ALL been played, robbed, duped, bilked, scammed and damned. Stop the hemorrhaging by refraining from ALL voting, altogether (a/k/a 'Domestic Terrorism') and walk away with clean hands and dignity intact――so unlike the filthy politicians of epic government fail!

❝ALL tyrannies rule through fraud and force, but once the fraud is exposed, they must rely exclusively on force.❞ ――George Orwell

❝You have to be armed to have power, you see.❞ ――Fred Hampton

❝You see what power is: Holding someone else's fear in your hand――and showing it to them.❞ ――Amy Tan, 'The Kitchen God's Wife'

❝Only a virtuous people are capable of freedom. As nations become corrupt and vicious, they have more need of masters.❞ ――Benjamin Franklin

❝A bureaucrat is the most despicable of men, though he is needed as vultures are needed, but one hardly admires vultures whom bureaucrats so strangely resemble. I have yet to meet a bureaucrat who was not petty, dull, almost witless, crafty or stupid, an oppressor or a thief, a holder of little authority in which he delights, as a boy delights in possessing a vicious dog. Who can trust such creatures?❞ ――Marcus Tullius Cicero

❝Yes, friends, governments in capitalist society are but committees of the rich to manage the affairs of the capitalist class.❞ ——James Connolly: War Upon the German Nation (1914)

❝Everything the state says is a lie, and everything it has it has stolen.❞ ——Friedrich Nietasche

❝The self-righteous rule out the possibility that THEY are what has gone wrong.❞ ――Mason Cooley

❝The obedient always think of themselves as virtuous instead of cowardly.❞ ――Robert Anton Wilson

❝Laws are created to be followed by the poor. Laws are made by the rich to bring some order to exploitation. The poor are the only law-abiders in history. When the poor make laws――the rich will be no more.❞ ――Roque Dalton García

❝The gentle art of politics is getting votes from the poor, and campaign funds from the rich――by promising to protect EACH from the OTHER.❞ ――Oscar Ameringer

❝Remember, democracy never lasts long. It soon wastes, exhausts, and murders itself. There never was a democracy yet that did not commit suicide.” ――John Adams

That about says it all.

If the candidate lives in Queens and cares enough about the District that they want to run for office, I will look into their positions and consider them. I don't care where they were born. We are a nation of immigrants - whether it's from other countries, other states, other cities, or other towns. Just give me an honest, hard-working person ... please.

Jenn Krinsky is a homewrecker said...

"Just give me an honest, hard-working person ... please."
That's a thing of the past for public service. TR was the last...