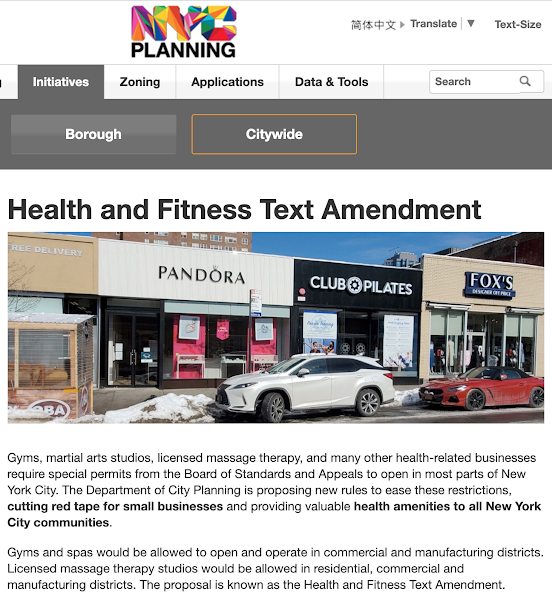 From the Department of City Planning:

The Health and Fitness Text Amendment eliminates the special permit that is currently required for gyms, spas, and licensed massage therapy – referred to as Physical Culture or Health Establishments in the Zoning Resolution.

The proposed changes could apply to a range of health and fitness businesses such as gyms, martial arts studios, indoor cycling spaces, yoga studios and licensed massage therapy studios.

Gyms and spas would be allowed to open and operate in commercial and manufacturing districts around the city. (Learn more about Zoning Districts here.) Similar to other neighborhood services such as restaurants, drug stores, and dry cleaners, these businesses would be allowed along all local retail streets. In certain commercial districts generally characterized by smaller establishments, gyms and spas would be limited to 10,000 square feet.

Licensed massage therapy studios would be allowed just as are other health care practices licensed by the State, such as physical therapy or outpatient doctors’ offices. These are permitted in residential, commercial, and manufacturing districts.

On his way out the door, BDB wants to legalize sex work so badly he is now encouraging massage parlors to open up next to your kid's school, on your quiet residential street and in your apartment building. The City already does practically nothing to close illegal spas and massage parlors located along commercial corridors. Lifting restrictions on gyms and martial arts studios makes sense, but why we're inviting sex trafficking to proliferate in residential areas now is mind boggling. To tie this latest push to "COVID recovery" is a bit of a stretch.

This is making its way through the community boards now so you might want to make your thoughts known to them and your elected representatives.
Posted by Queens Crapper at 12:38 AM

The sex workers I'm sure are now very happy. So now more "happy endings" coming to a block near you I guess.
Also, I have seen gyms opened here in the city, and I have also seen some of their rates and I say, no thank you. There was one gym I tried to sign up for and they asked me for 200 dollars per month for membership fees and for 250 dollars per month to go during "peak hours". Another gym wanted 150 per month. These prices are outrageous. There is a planet fitness now in great neck or little neck that I can just go to. And there is also one of those chain gyms now in queens village as well. Lucille roberts on bell blvd which got closed down (because they raised the rent by triple the price) only charged like 20 bucks per month. So the city killed that gym off. And who wants to pay 200 dollars a month for a gym membership on top of paying SO MUCH for rent?

The key here is that they would be "LICENSED" The massage parlors that you are referring to are not.

However, thank you for bringing up the topic which people may want to examine further. It certainly is an issue. Will licensure have to be posted?

Gym? Push up, sit ups, squats, chin up bar. All can be done in your apartment. Jump rope outside.

UBI and a massage while the middle class gets screwed !

Let's be honest... There are already plenty of "spas" located a block from homes. That damage was done years ago.

This is great! I can get my massage, and then when NY finally gets retail recreational marijuana stores, I can go a couple shops down the block and pick up an 1/8th of an ounce!

In the words of the Vice President

Massage sex parlors in every neighborhood.

This is what happens when you keep reelecting "politicians for justice" who only care about lawbreakers, crooked businesses, greedy landlords, violent criminals, drug dealers and homeless criminals.

They only fight for those who want to make this city more ghetto.

Now they are for Licensed massage sex parlors in every neighborhood.

Licensed Drug Clinics to give out free Cocaine, free Heroine, free Pot, and free Needles to Shoot up in Public Parks?

Oh wait. That is already happening in this Shithole City!!

Hate to tell you this but they are already in plain sight everywhere - the Asian ones are most obvious with their gaudy faux silk curtains held in place tacky sashes with a photo of a half-naked young Asian lass on her tummy with a dreamy smile as someone places stones on her back.

These places are literally on the next block to schools and churches. Queens is a real classy 3rd world dump, eh? VIBRANT! DIVERSE!

Look all that matters is the Democratic charade continues with a tense focus on donations and votes and nothing of value in return - unless you are a Party Hack. I get tons of spam every day and nothing is a juvenile as a Dem solicitation. A real train wreck. Crappy should do a steady feature of that trash - we need humor in our lives after watching the news.