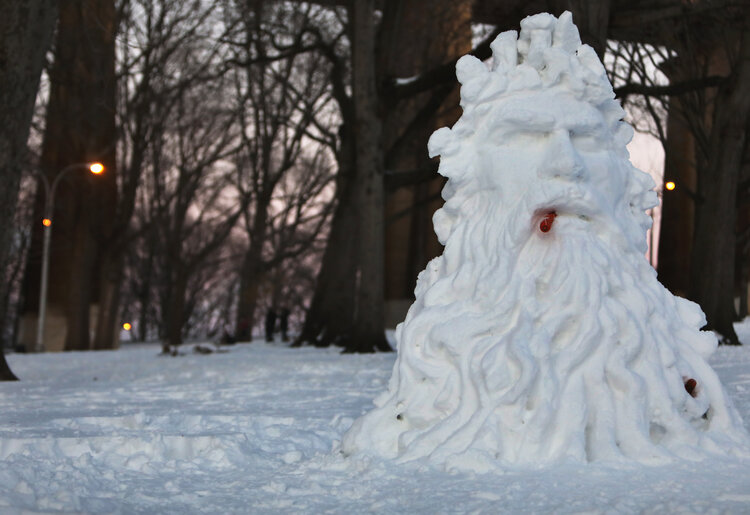 At the foot of the meadow in Astoria Park, just beyond a crop of trees and not far from the century-old Hellgate Bridge, a towering bust carved in snow and ice appeared Thursday evening.

Rising more than six feet in height, his face was encircled with an icy mane of curls. A carrot dangled from the right side of his lips, reminiscent of an expensive cigar. His deep set eyes gazed southward, as if to halt the winds that a day earlier had brought an estimated nine inches of snow to western Queens. Thou shalt not pass, the wizened snowman seemed to say.

But who was this mystery snowman? Who carefully chiseled his furrowed brow? What earthly beings wrought Old Man Winter of Astoria?

An Eagle investigation initially led only to dead ends. Photos showed several unidentifiable figures bundled up in coats and hats near the sculpture from a distance.

Most of the responses to the Eagle’s inquiry on the neighborhood Facebook page simply marveled at the artistry and craftsmanship. One person joked it had been made by aliens.

But then there was a break in the cold case.

A woman noted that she had met the snow sculptors on Thursday. The mystery has been solved.

“I had been sitting on the bench waiting for him, and I said let’s build a snowman,” said Vadakara, 27. He and Vadakara simply picked a patch of untouched snow.

The Astoria residents initially envisioned a Christmas tree, then switched to a portrait, then Santa Claus, and finally a Greek god. “Maybe it’s all of them,” Tzavellas said.

Maskless figure must be demolished for defying cuovid regulations