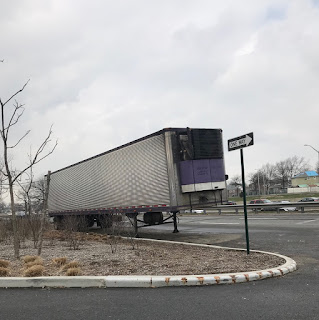 The commanding officer of the 106th Precinct this week told The Forum that his officers will soon meet with the owners/operators of the tractor trailers that seem to clog up both North and South Conduit avenues in South Ozone Park.

“We are aware of the situation and have visited the location,” Capt. Brian Bohannon said on Tuesday. “The trailers are moved frequently. We will sit down with management to discuss these issues.”

Residents have raised concerns about the problem in the past, noting the danger posed by the presence of detached trailers at busy intersections along both thoroughfares.
Posted by Queens Crapper at 12:43 AM

Not sure why this takes so much time and effort to resolve. If I parked my car in the same spot, it would be ticketed and or towed in less than 24 hours. Why can't these people get the same treatment?

Because in South Queens NYPD is blind and apparently cannot see all the illegally parked trucks.

"Being aware" and actually doing something called ENFORCING THE LAWS are two completely different things. I mean this has been going on for years and years. Either someone is being paid off or this precinct, one of the worst, just isn't doing their job or both. Amazing when regular folks have their car parked at an expired meter for a minute, they get tagged, but this bullshit, nothing. Talk about some investigative journalism, this is ripe for that, but is there much investigative journalism anymore, well, yes, when Kardashian's ass gets bigger.

Just because it has been acknowledged doesn't mean anything is going to happen about the blatant and delinquent trailer parking.

I like Crappy's post headline, which I think is apt for the initial indifference that the 106 displayed. If this was any civilian treating the thorough fare like a trailer park their property would be hauled with the quickness. Besides, it's common knowledge that there is absolutely no parking or standing allowed on both sides of the Conduit.

This is what happens when you do not go after your politicians and the media that little more than publishes press releases from them as 'news.' Real problems just sit while they tackle 'issues' for the Party.

SURE THEY ARE. THEY ALWAYS SAY THAT AND THEN STICK AROUND FOR ONLY 3 WEEKS AND THEN GO SOMEWHERE ELSE.

What do the cops mean "they will sit down with management to discuss these issues”
This is like having a useless meeting with the mayor, who will tell you what you want to hear (too keep you calm) then do whatever the hell he wants anyway.
WTF is this, a nod to allow out of state truckers & scofflaws to take over our streets too?

Why not just enforce the law?
How about give them a lot in Jamaica to use as a layup ?

Some animals are more equal than others

“We will sit down...”
BULLSHIT! They’re illegal! Ticket than tow!
“oh, please don’t park your trailers there illegally mister businessman” Get the hell out of here! Private citizens get ticketed but let’s cater to the repeat blatantly illegal offenders.
We have the same thing on the GCP service rd near Forest Hills, High school. Up to 20-25 illegal trucks parked there every single weekend, even blocking a lane of traffic because of thier width. Anything done? Yup. Once a year when we he 112 needs a photo op for thier instagram page.

I don't get this. Now we can sit down and discuss not breaking the law?

How about the police get off of their lazy rear ends and ticket and tow the lawbreakers?

Is that too much to ask for the obscene property taxes we pay?

What is there to discuss? The trailer in that picture is abandoned. You can't just leave the truck there not attached to anything. The road isn't for storage.

How come they get sit down meetings with the cops while us ordinary people just get ticketed and towed without recourse?

Oh yeah, the cops will resolve the problem the same way they resolved the problem on the north bound entrance to the Clearview Expressway off the LIE. Trucks are always pulled over onto the shoulder of the road and the drivers sit there idling their engines or sleeping. This problem has existed for decades and the cops do nothing.

Me: I am sorry, your honor, I forgot that parking my truck on the street overnight was against the law.

Judge: You did? OK, you can go. Just don't do it again. (wink, wink) And thank you for the donation to my re-election campaign.

"Police promise an intervention"
Yes like they promised to stop the loud music I can hear with my windows closed in Whitestone coming from miles away to the west somewhere in Willets Point/Flushing Bay !

Intervention?
Does that mean beating up on somebody?
LOL!
ALL LIVES MATTER!